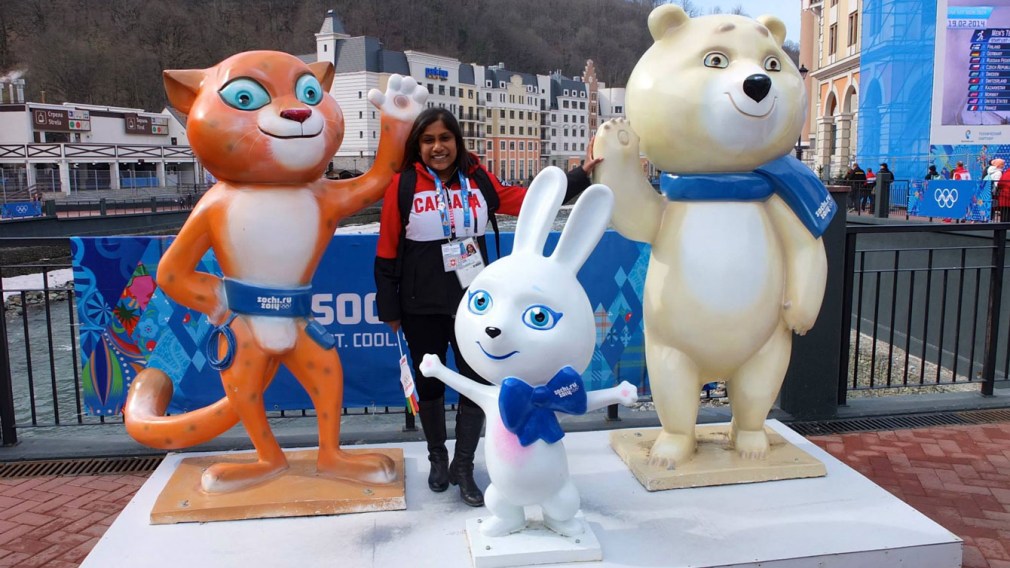 By The Canadian Olympic Committee
April 15, 2014

This story was posted in its original version on skatecanada.ca, written by Allan Gordon.

When Shanti Suppiah found out the Canadian Olympic Committee had selected her to be a volunteer at the 2014 Olympic Winter Games in Sochi, she could hardly contain her excitement.

“I had to close my office door and kind of compose myself,” admitted Suppiah who works in the investment sector, “and then there was a bit of jumping up and down.”

Up until that moment, her dreams of volunteering at Sochi were slowly fading. “I hadn’t heard after about six or seven weeks and I thought they picked their team and I wasn’t on it.” Suppiah’s role in communications and media relations at Skate Canada events has included press conference operations, assisting in the press mixed zone and television interviews, and general media centre procedures – and in doing so, her volunteer experience has allowed her to rub shoulders with some of the top figure skaters in Canada and the world.

In Sochi, she helped with the Canadian Olympic Committee’s digital media team. “My responsibilities included leading and cultivating content for live blogs from Canada Olympic House and Olympic venues,” said Suppiah, “as well as updating the Canadian Olympic Committee’s website.” The live blogs allowed her to get a feel for Canadians’ emotions back home, while experiencing the events first-hand in Sochi.

Having experienced so many incredible events in Sochi, it wasn’t easy to single out the top moment, but she was able to pick out some highlights (in no particular order) that came to mind when asked.

The first outstanding event was the Opening Ceremony. “Seeing the lighting of the Olympic torch,” Suppiah said, “Canada House was located beside the (Fisht) stadium and I got a great view of the torch being lit and the phenomenal firework show that followed.” Also among Suppiah’s highlights were the two hockey finals. “I was live blogging both the men’s and women’s gold medal hockey games from Canada House,” she said. “Cheering on Canada’s hockey teams with diehard Canadian fans, and celebrating their gold medal wins is an experience I will never forget!”

Of particular note, she listed Tessa Virtue and Scott Moir’s free dance as a moment she will cherish, “I was in the audience at the Iceberg Palace on the night of Tessa and Scott’s free dance. Their performance was beautiful and very moving; it was a privilege to witness.”

In the end, Suppiah left the Games with many memories, and without a single regret. “Volunteering at the Olympics was an amazing experience; I had the time of my life in Sochi and made some great friends along the way.”

When asked if she would do it again, her response time matched the answer itself: “In a heartbeat.”

Olympic Team volunteer recalls experience of a lifetime
55 Olympic and Paralympic hopefuls awarded the 2020 Petro-Canada FACE™ grant
Shuttlecock and balls: The fastest moving objects in sport
Adventure, culture and food: 9 things Peru is famous for
Team Canada athletes in acting roles
What to expect from Canadian tennis players at the French Open