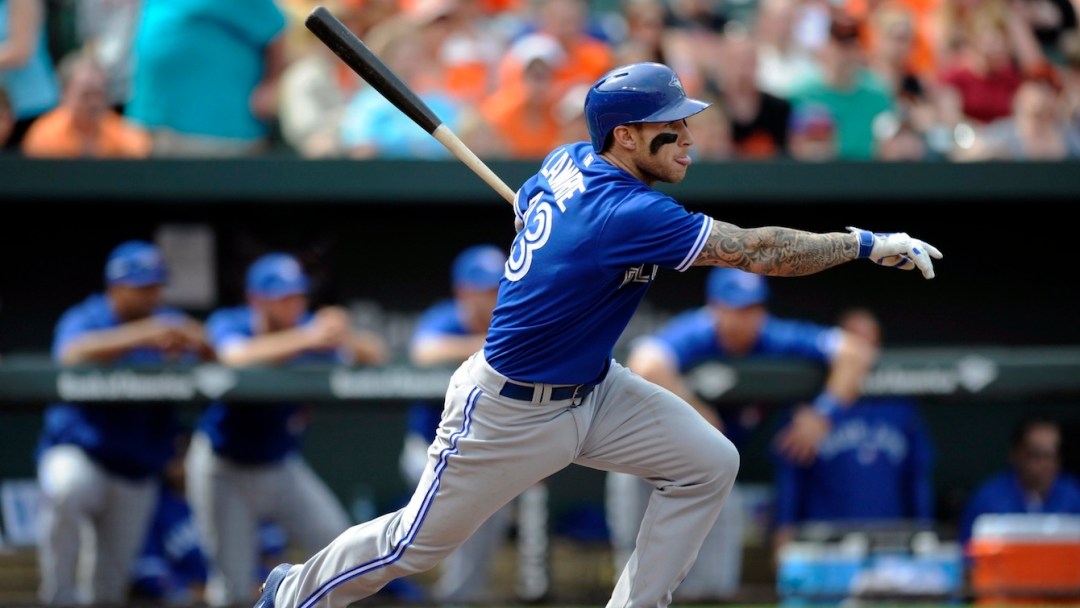 When it comes to sports that involve multiple skills to compete at a high level, baseball is right up there with almost any other sport. To be a great positional baseball player (I will get to the pitchers soon enough) you need to be able to hit, catch, run, and throw, among others.

Then consider the fact that they have to maintain their abilities over 162 games, by far the longest schedule of any North American professional sport. With the 2014 season complete and playoffs about to begin, it’s time to take a look at why baseball players deserve more credit as high-level athletes. Hitting a baseball is one of the most difficult skills to perfect in all of sports. Justin Morneau won this season’s National League Batting Title (given to the player with the highest batting average), finishing with a batting average of .319. That means that he got a hit in just under 32% of his at-bats this season and was unsuccessful 68% of the time.

In which other sport can you fail on two out of three attempts and still be considered one of the game’s best? In basketball, for example, DeAndre Jordan had the highest shooting percentage in the league last season, hitting 67.6% of his shots. In football, the best quarterbacks complete around to 70% of their passes.

So why is a 32% success rate in baseball so impressive? Well, consider the fact that an average fastball in 2013 reached 92 miles-per-hour and it might make a bit more sense. If you had 10 chances to hit a 92 mph (148 km/h) pitch, would you even be able to connect on one? It’s doubtful. Many people will never even reach speeds of 92 mph in their car, let alone try and connect with a ball that has been thrown at them at that speed.

Next, consider the fact that to hit a home run in every ballpark is completely different. Some stadiums feature massive walls, like the Green Monster in left field at Fenway Park, which is the highest outfield wall in the game, yet also one of the closest at only around 310 feet from home plate. Other ballparks have shorter outfield fences, but they are usually a lot farther from the plate. The farthest centre field wall in the game is at Houston’s Minute Maid Park, where the 435 foot distance from home to centre is over 10 feet farther than any other park.

For the biggest hitters in the game, cranking a home run can almost look effortless. According to ESPN’s Home Run Tracker, the longest home run this season came from Mike Trout, who crushed a ball 489 feet. The player with the highest average home run distance was Matt Holiday, who average over 418 feet per home run.

So, how far do you think you could hit a baseball? Even if it wasn’t coming at you at over 90 mph, it likely wouldn’t be anywhere even close to 400 feet.

Catching a baseball is not one of the hardest skills to learn, but it is one of the hardest to perfect. Even the best and most experienced defensive players in the league make errors. Some positions, namely the middle infielders (second basemen and shortstops), are more likely to make errors than others since they tend to have the ball hit to them more often.

Thirteen-year veteran first baseman Albert Pujols made only three errors in 2014, the fewest in the league. He and Morneau (who only made four errors all season) tied for the highest fielding percentage, finishing the 2014 season at .997 (in other words they completed 99.7% of the plays that came their way).

Outfielders cover the most field of any positional player. As a result, they need to be able to make amazing catches while running, diving or even hitting a wall. Centre fielders need to have quick reflexes and take the proper path to the ball to allow them to make a play. A split second delay could mean the difference between an easy catch and a ball getting past a fielder for an extra base hit.

Most of the best catchers in the league are those who play…Catcher! Remember we discussed how the average fastball last season measured 92 mph? Well, catchers are responsible for getting a glove on all of those rockets. Some catchers in particular are extremely skilled with their gloves. For example, Josh Thole has the role of catching Blue Jays pitcher R.A. Dickey’s knuckleball. The pitch is known for darting in a random direction at the last second, and Thole’s job is to attempt to catch it. If you don’t think that’s very hard, then check out this GIF of Thole catching Dickey’s patented knuckler.

While speed is not a prerequisite to playing baseball, many of the game’s top players rely on their wheels to help them make plays. Whether it’s running down a ground ball as an infielder, chasing a fly ball as an outfielder or trying to steal a bag as a baserunner, there are lots of opportunities throughout a game for position players to use their speed.

Middle infielders have very little time to react to balls that have been hit in their direction, so most of them rely on speed and agility to make plays. They are often among the fastest players on the team, and usually count on their speed to help them get hits, rather than crushing the ball out of the park. Two of the top three leaders in stolen bases this season were middle infielders. Shortstop Dee Gordon led the league with 64 stolen bases, while second baseman Jose Altuve tied for second with 56.

Outfielders, especially centre fielders, cover more ground than the rest of the players on the field, so they tend to do more running than any other position. Most of their energy defensively is spent chasing down fly balls and making diving catches. In 2014, centre fielders accounted for seven of the top ten stolen base leaders. Billy Hamilton of the Cincinnati Reds had the most steals of any centre fielder, finishing tied for second in the league with 56.

Every player on a baseball team needs to have a strong throwing arm (except for maybe first basemen). However, from position to position, the types of throws that they must make can vary quite a bit.

Outfielders have the longest throws to make of any position. After catching a fly ball or tracking down a hit, outfielders must throw the ball back into the infield as soon as possible to assure that any runners on base cannot advance or to catch runners that are still tagging up. Sometimes that involves throwing from deep in the outfield all the way to home plate to try and get a runner out.

Third basemen and shortstops often have the toughest throws to make from the infield. These defenders have to make split second decisions to get a glove on balls hit their way, and then they need to collect themselves and fire a throw over to first base in time to beat the runner.

Even catchers, who are usually on the team for the defensive or hitting prowess, have strong arms to throw out runners who are attempting to steal a base. Catchers need to have good hands also, as a lot of the time they need to dig the oncoming pitch out of the dirt, then fire over to throw out the base stealer.

Pitchers are a breed of their own in baseball. A pitcher must possess almost every skill that a positional player does, except they also need to be able to pitch a baseball with speed and accuracy.

So many aspects of the game have improved over the past 40 years, but still the hardest thrown pitch ever came from Nolan Ryan back in 1974, when he became the first player ever to record a pitch over 108 mph. That’s right, since 1974 no one has thrown a harder pitch than the great Nolan Ryan. Even Cincinnati Reds reliever Aroldis Chapman (nicknamed the Cuban Flame Thrower), who has thrown over 105mph, hasn’t come close to beating the 40 year-old record.

In addition to bringing the heat, pitchers these days must also be able to throw with good accuracy. Just ask former St Louis Cardinals pitcher Rick Ankiel, who threw five wild pitches in one inning of a playoff game back in 2000. Ankiel later retired from pitching, only to return to the Majors as an outfielder (with a rocket arm).

Some pitchers rely more on movement than speed. As seen above, RA Dickey can make a baseball dance like no other. He throws the knuckleball harder than any of his predecessors, reaching speeds over 80 mph. Before Dickey, the best knuckleball pitcher in the game was Tim Wakefield, and he barely threw faster than 70 mph.

Not only must pitchers bring the heat and be accurate, they must also play defence. When a batter hits the ball back up the middle, pitchers must be aware and ready to react. Some pitchers are great defensively. Current Blue Jays starter Mark Buehrle is known as one of the best defensive pitchers ever. Don’t believe that a pitcher can make good plays with his glove? Watch this:

If you were a skeptic of baseball before reading this article, I hope to have changed your opinion. If I missed anything let me know in the comments below or on Twitter @CDNOlympicTeam. 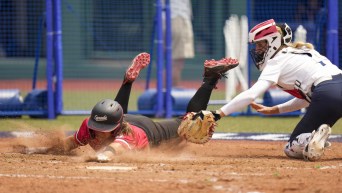 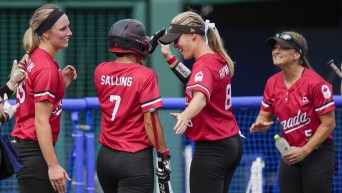 Stéphanie Savoie joined the national team in 2007 and made an immediate impact, helping Canada to its best-ever finish at...

While growing up, Jenna Flannigan’s role models were all players on the national softball team because of their talent, dedication,...

Brock Kjeldgaard competed with Team Canada twice in 2011, helping the team win gold at the Pan Am Games in...