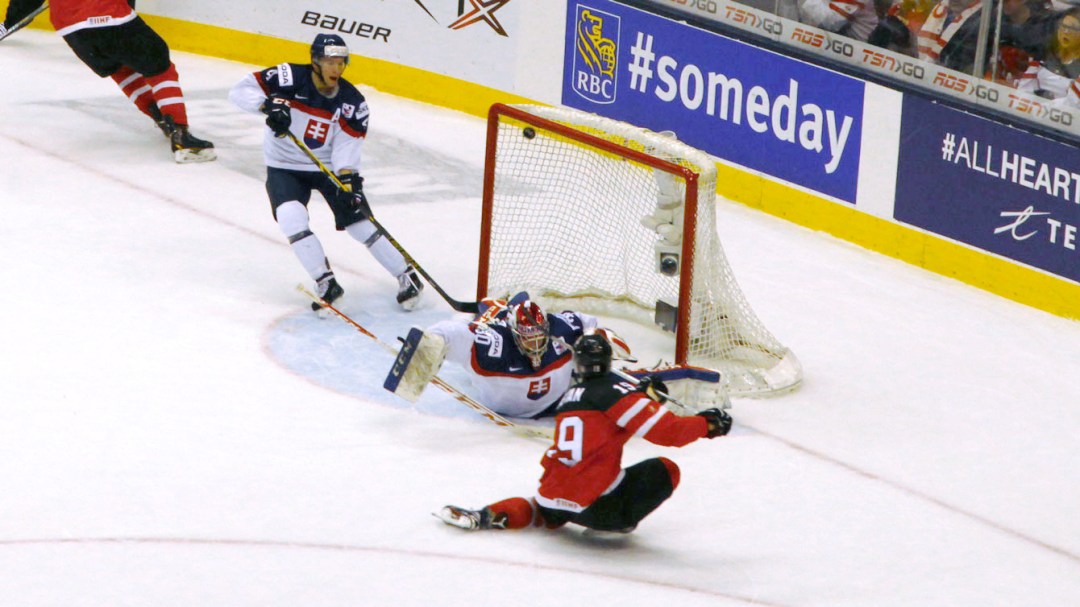 Canada advanced to the final of the 2015 IIHF World Junior Championship with a 5-1 victory over Slovakia on Sunday at the Air Canada Centre in Toronto.

The win, aided by a Nic Petan hat-trick, sets up a mouth-watering Canada-Russia final, a classic match-up at any level with deep emotional ties for Canadian hockey fans for the last four decades.

In a closely contested first period, Slovakia looked nothing like the timid squad that was destroyed 8-0 by Hockey Canada‘s juniors in the teams’ tournament opening encounter.

RELATED: Canada through the group stage

Petan’s power play goal to the glove side of Slovakia goalie Denis Godla at 4:27 of the first separated the sides with six shots each. Equally important to Petan’s goal was a stellar stop by Canadian netminder Zach Fucale on a Pavol Skalicky breakaway to preserve the 1-0 first period advantage. 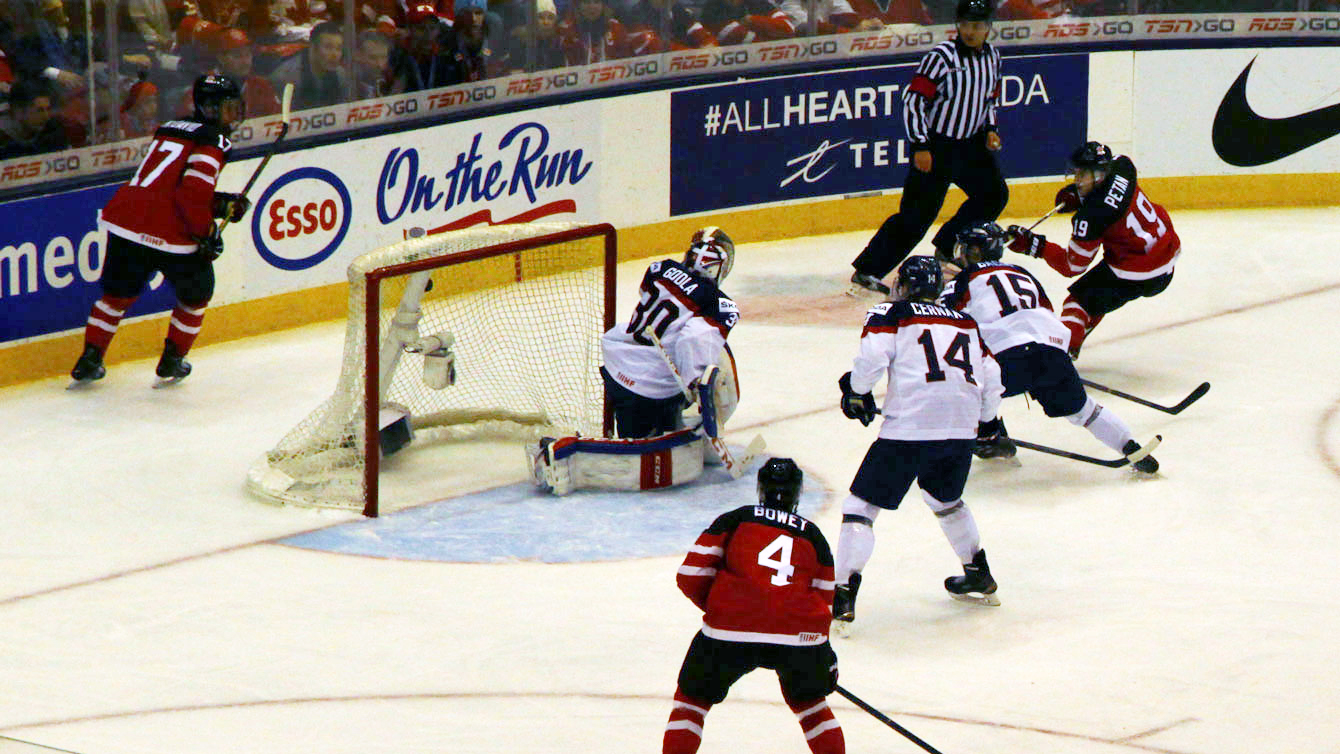 Nic Petan scores the opening goal of the semifinal against Slovakia, his first of three on the night.

Canada began to assert itself offensively – and physically – in the second period. A Max Domi hit at centre ice had the ACC crowd chanting his last name, much as they did when his father Tie put on the local blue and white colours of the Maple Leafs.

With momentum firmly on Canada’s side, Petan got his second of the night at 18:06 of the period, shelving one over a sprawling Godla just as the goalscorer himself was sliding away from the action and it was 2-0 Canada.

Like his first, Petan’s second goal too was assisted by both Connor McDavid and Curtis Lazar.

“I’m not going to complain about anything he’s doing out there,” Petan later said of McDavid’s ingenuity. “He’s pretty nifty with the puck and my job was to try and get open. He’s got great vision so he found me.”

Less than 90 seconds later, a Canadian rush produced a 3-0 lead when Shea Theodore neatly finished off a pass from Anthony Duclair. 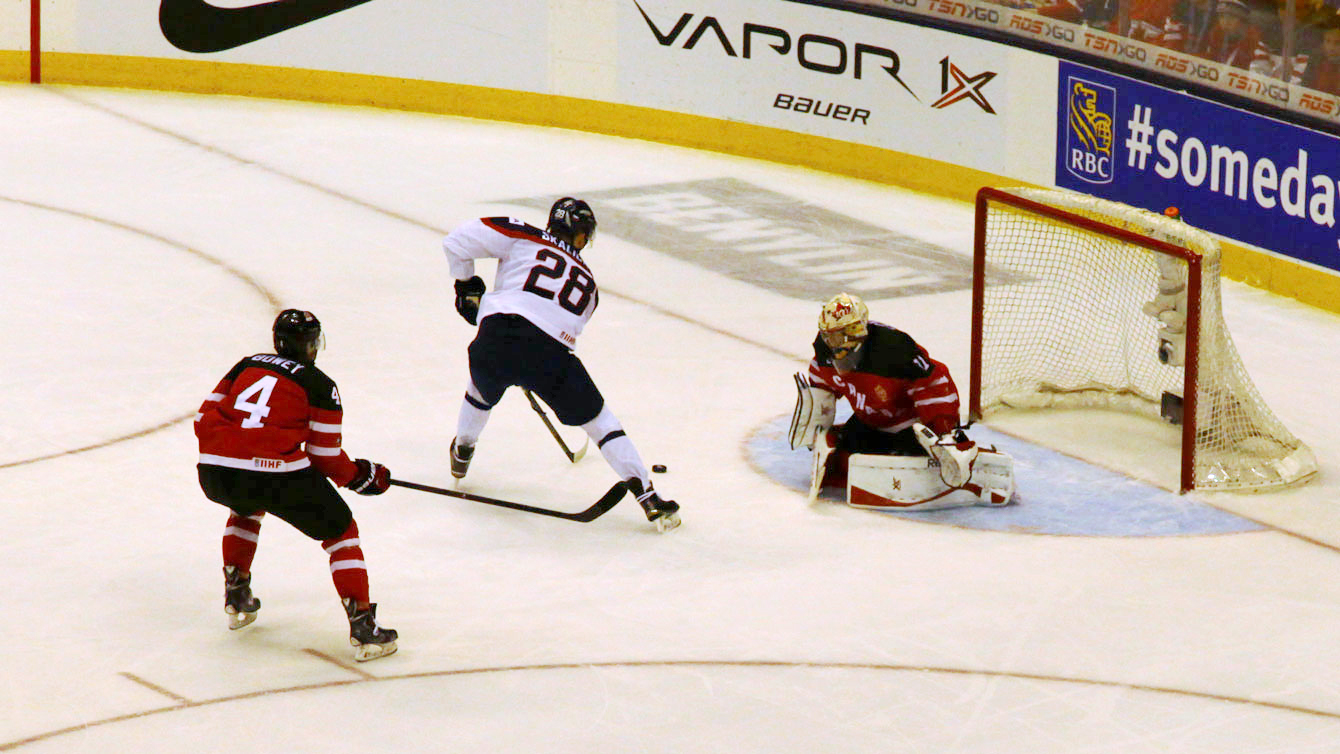 Slovakia clawed one back with just three seconds left in the period, David Soltes frustrating the Canadians after a rare moment of lapse in the tournament and the teams entered the third period at 3-1 for Canada.

Surely head coach Benoit Groulx expressed his dismay at allowing Slovakia a slight opening back into the game, and Canada came out in the third period looking to right that wrong.

Duclair restored Canada’s three-goal lead at 2:47 of the third before Petan completed his hat-trick at 11:59 making it 5-1. Lazar and McDavid assisted on all three Petan goals.

“We got the job done, that’s the first and most important thing,” team captain Lazar reflected after the game. “I thought at times the Slovaks did a great job of just sticking around and frustrating us, but we stuck with our program, really amped it up in the second half of the game and we’ll need that moving forward.”

The hat-trick hero, Petan, was ecstatic that he got to deliver in front of loved ones.

“It was pretty cool, I’ve got some family from Vancouver and Montreal (here), so pretty cool to see them in the crowd, throwing hats.” 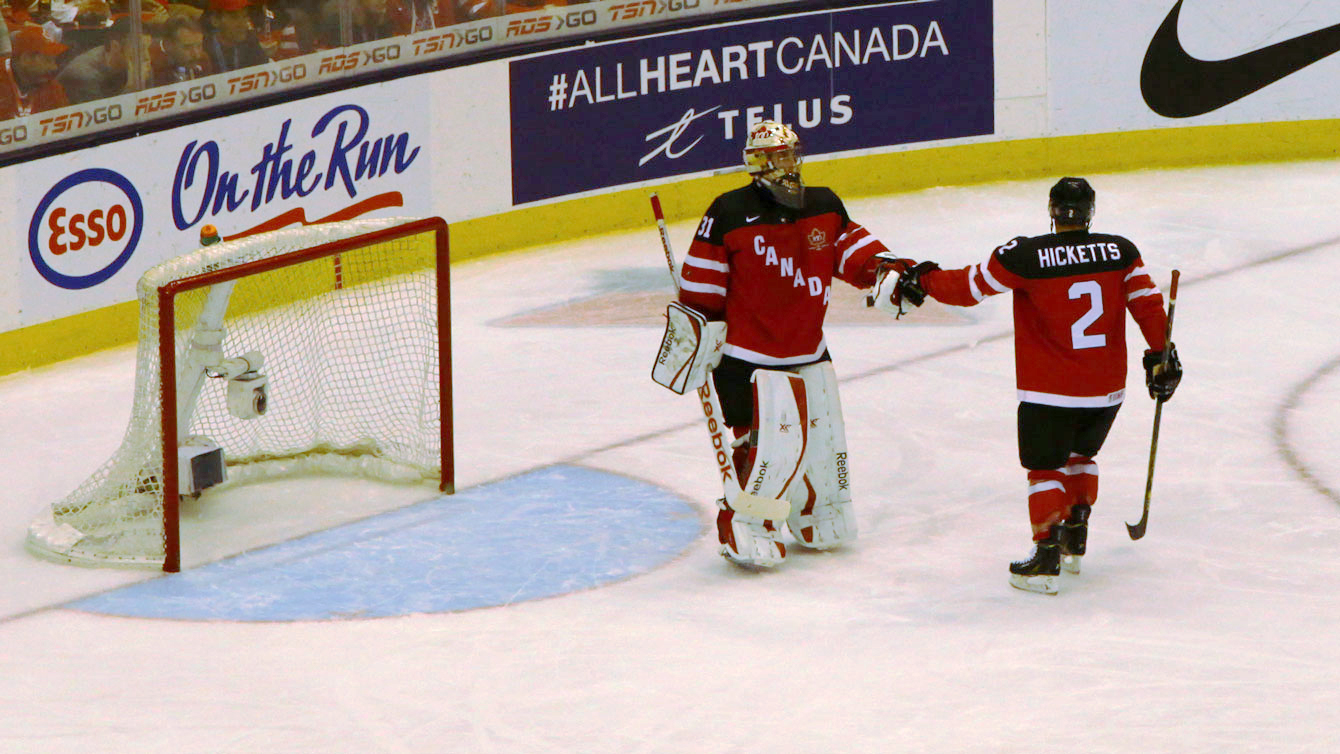 Zach Fucale acknowledges teammate Joe Hicketts after his key second period clearance while the Canadian goal was at Slovakia’s mercy.

In the earlier semifinal, the Russian team, employing a physical and opportunistic game, beat Sweden 4-1 to set up the first piece of the Monday final in Toronto. Alexander Sharov scored twice in the Russian victory. It was Sweden’s first loss of the tournament.

While Russia has improved throughout the tourney (beating the United States in the quarterfinal before dumping the favoured Swedes), the Canada captain feels confident in his team’s form. “If I’m passing to Connor and Nic, I know the puck’s going in a good place,” Lazar said of the offensive burst seen on Sunday. Petan is now the tournament’s leading scorer with four goals and 11 points.

The Canada-Russia game, which always jogs Canadian minds back to the 1972 Summit Series, will be at 8 p.m. ET on Monday at Toronto’s Air Canada Centre (live on TSN). 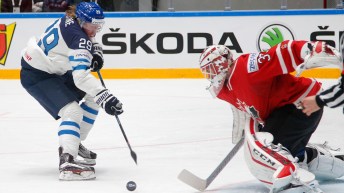 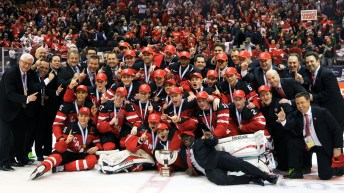