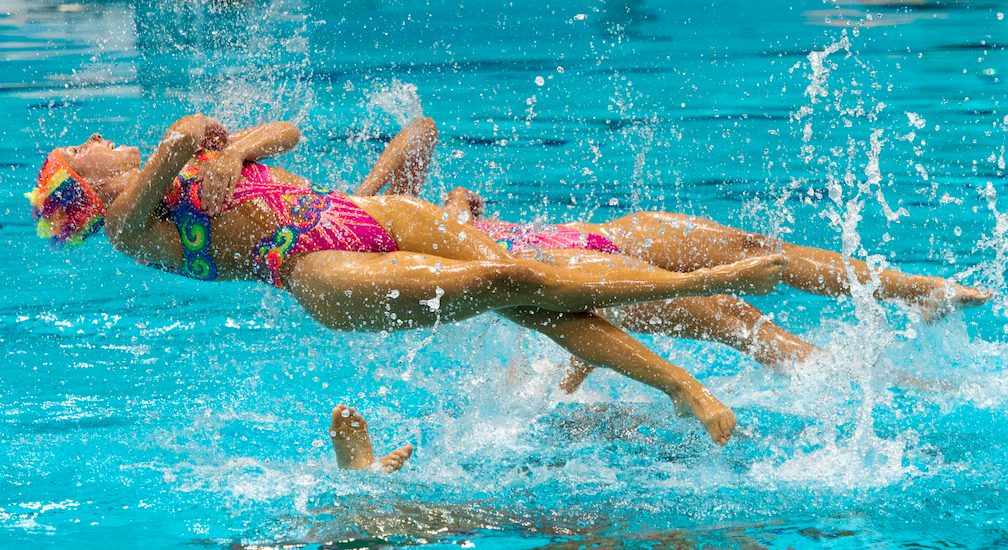 The average person can hold their breath for about two minutes. A world class synchronized swimmer can go up to three… upside down… under water… while executing a perfectly timed choreography.

But that’s not even the most impressive part. The speed at which they perform it all, that’s what’s truly spectacular. And it’s getting faster with every competition.

“Each year routines get faster and more physically demanding,” added the 26-year-old over the phone. “Just look three years ago, how different it was, so when you go back 15 years it’s almost like it’s a whole other sport.”

Thomas, who was part of a fourth place Canadian squad in the London 2012 team event, credits a large part of the recent jump in evolution to advancements away from the pool, straying from some of the more traditional training routines and looking outside the sport for inspiration. 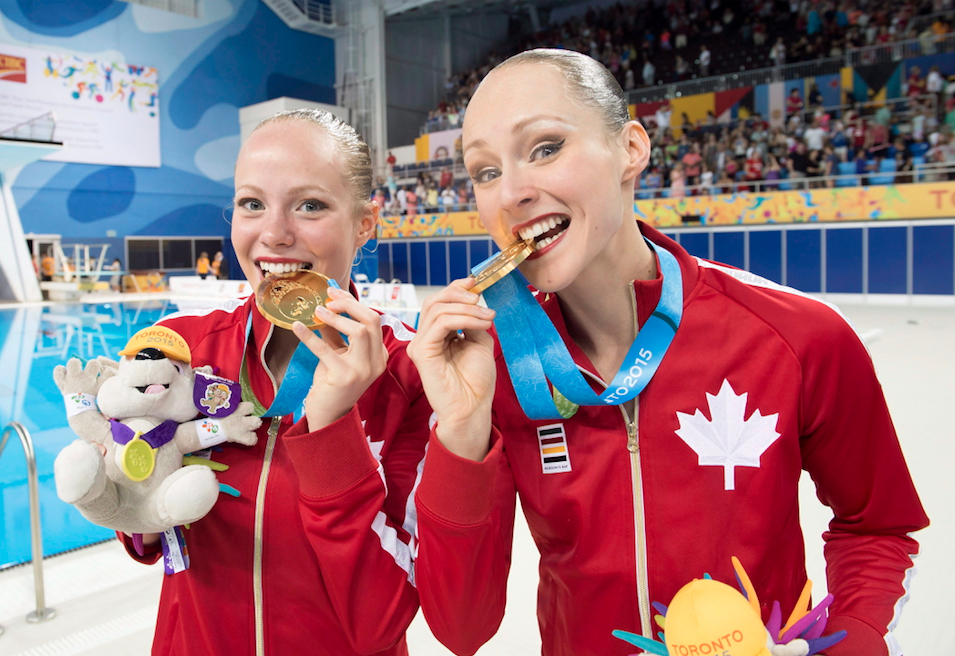 Canadians Jacqueline Simoneau and Karine Thomas (right) show off their Gold medals after winning the Synchronized Swimming duet competition at the 2015 Pan Am Games in Toronto on Saturday, July 11, 2015.

In addition to ballet, the Canadian synchro team also trains with a freestyle skiing coach in order to improve aerial techniques and reach new heights (literally). Much like divers, they train on mattresses before moving to the pool.

“We’re just starting to figure out how high we’re able to go and how fast can we can rotate. Canada is one of the countries on the forefront of this. We love to push the envelope.” 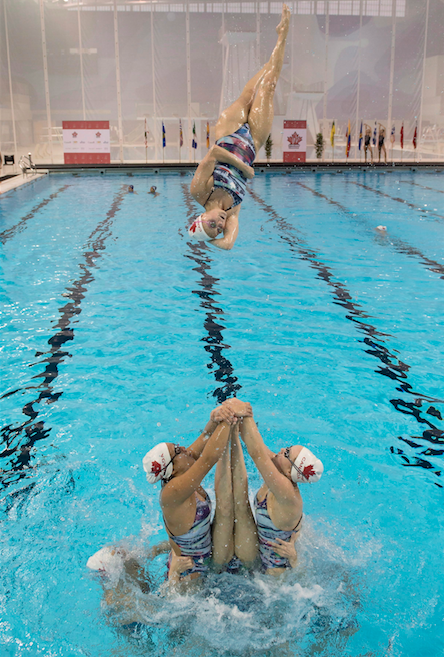 The knowledge and physical skills acquired through these different sports translates into never before seen execution speeds in the pool, prompting coaches to turn to technology to make sure they catch every detail. The use of instant video replay during training for instance has become essential.

“We wouldn’t be able to do without them (iPads), that’s for sure,” shares Lyne Piché, a member of the Senior National Team coaching staff since 2010 with more than 30 years of experience in the sport.

“With the increasing number of movements and eight swimmers to keep an eye on, we need to be able to verify what we think we saw and adjust if necessary. The movements must be exactly the same as much as possible,” added Piché.

According to Thomas, video replay for training purposes has proven just as helpful for the athletes who are always looking to improve.

“We’re able to slow down movements, stop and analyse specific angles which helps us be the most synchronized possible. We also work with biomechanics once a week to assess how efficient we are in our movements in the water.”

While the new speed standard has upped the wow factor, it’s also increased the difficulty for judges to follow along and give appropriate marks. Synchro swimmers are now able to achieve up to four leg movements in less than a second, which makes it harder than ever for judges to keep up.

“The way the sport is currently being scored is in the process of changing,” says Thomas. “You need to find the best way to determine the levels of difficulty and also execution. The key for judges is to find balance between the two.”

A seemingly easy solution would be to incorporate the use of video replay during competition. It’s commonly used in other sports such as short track speed skating. But given the average length of routines and amount of teams participating at any given World Cup or World Championships, implementing video replay could be problematic if not unrealistic.

Bobsleigh teams up with synchro

Alternatively, Piché’s recommendation would be for teams to submit their programs beforehand, like they do in figure skating for instance, giving the judges an idea of what to look for during competition and lowering the risk of missing routine elements.

“You almost have to be a super human to do this job. If they look down for a few seconds to take notes, they can easily miss certain aspects of the program that could add or subtract points.”

While the athleticism level in synchro is on the rise, the artistic elements are still at the forefront of the sport. Makeup has been part of synchronized swimming for many years now and with new day-long waterproof products that can only be removed using special soap, it is no longer a source of concern for athletes. 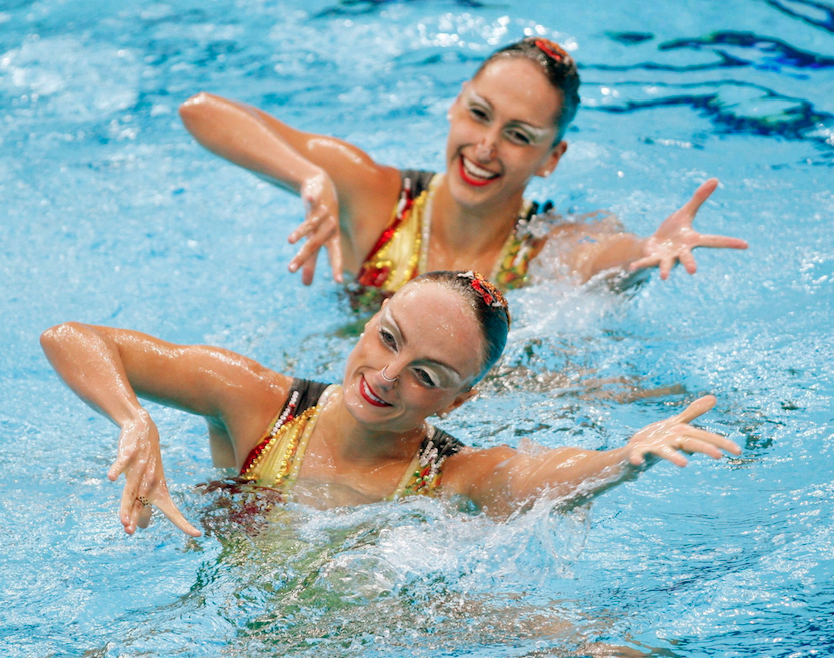 Canada’s Marie-Pier Boudreau Gagnon, front, from Riviere-de-Loup, Que., and Isabelle Rampling, from Burlington, Que., perform in the synchronized swimming duet final at the 2008 Summer Olympics in Beijing. The pair finished in sixth place.

It may not seem like a big deal, but advancements in makeup technology have allowed synchro swimmers to focus strictly on performance, having to sit in the makeup chair only once a day compared to the multiple touch-up sessions that might have been required in the past, taking time away from training and mental preparation.

“It’s really great for us. We can get our makeup done in the morning and not think about it for the rest of the day during training and competition later. We’re able to focus on our performance instead of all the fluff,” remarks Thomas.

Next summer, the Hull, Quebec native and her duet partner, 19 year-old Jacqueline Simoneau, also from La Belle Province, will head to Rio de Janeiro, Brazil in search of Olympic gold. The Rio 2016 synchronized swimming events will be held from August 15 to 20th. 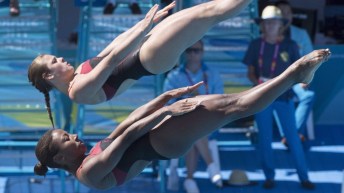 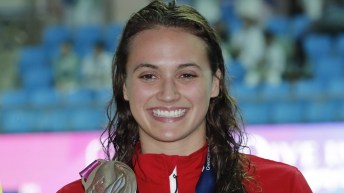