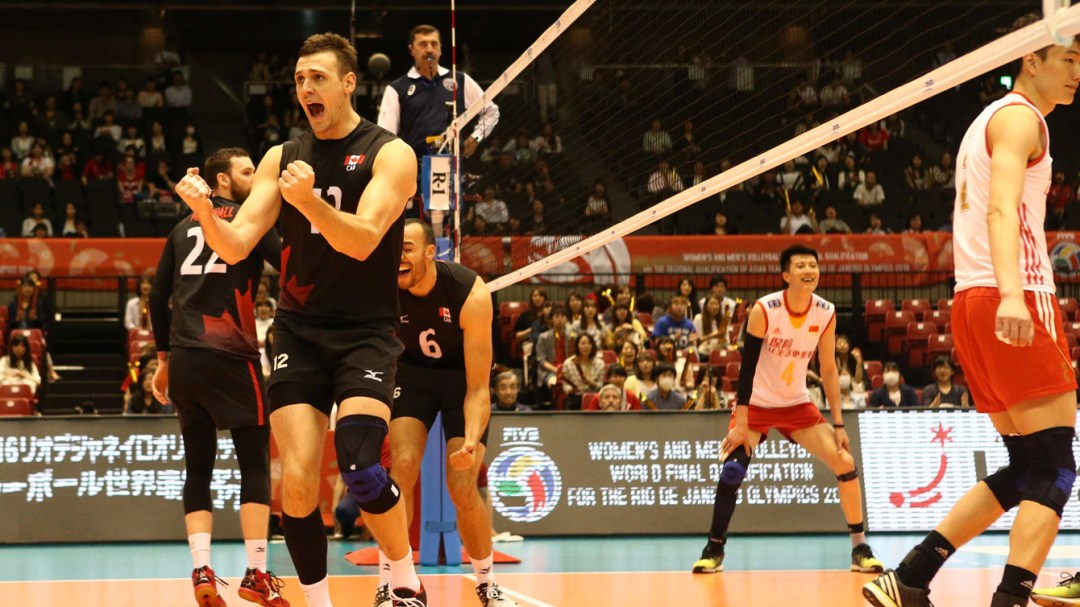 For the first time since Barcelona 1992 Canada will be sending a men’s volleyball team to the Olympic Games.

At FIVB’s World Olympic Qualification Tournament in Tokyo, it came down to the last day and the final spot for Volleyball Canada to secure a berth to Rio 2016. The men did their part, winning a five-set thriller over China 3-2 (25-16, 20-25, 24-26, 25-20, 15-9) on Sunday in Japan, and then watched Poland beat Australia, giving Canada the final Olympic spot at the tourney.

With four wins and 12 points from seven matches, Canada did enough to win one of the three Olympic spots available to non-Asian teams at this last chance tourney.

On Sunday, China needed to win by less than five sets over Canada to keep its own Olympic flame burning, and it looked like the emerging Asian volleyball nation would reach that promise at Canada’s expense, taking a 2-1 lead over the North Americans through three sets.

That’s when the Canadians found another gear, beating the capable Chinese defence for a fourth set win, evening the match 2-2 and taking it to a tiebreaker. 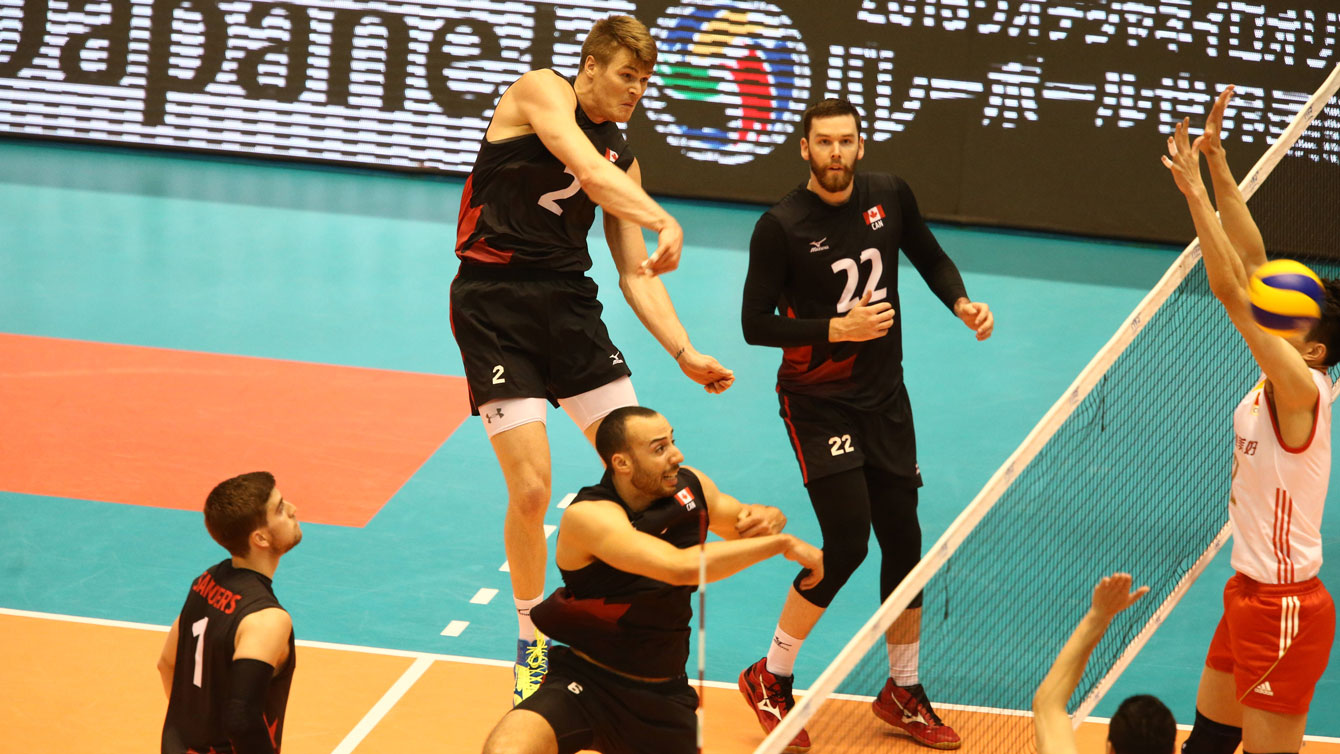 Gord Perrin (2) spikes past a Chinese block on June 5, 2016 in Tokyo at the final Olympic qualifying tournament for Rio 2016 (Photo: FIVB).

Deflated by its Olympic exit as the match reached a fifth set – China needed three points from the contest, winning in five sets only grants two – China was vulnerable and Canadians went for the kill. Led by Gord Perrin’s 27 points, Canada closed out the set 15-9 to take the match and tentatively sit in the final Olympic qualification spot.

Now sitting two points back of the Canadians and holding the set ratio tiebreaker in its favour, Australia had a chance to snatch that Olympic place from Canada against Poland, which had already qualified and dressed many of its secondary players.

However, led by chants of “Polska” from a partisan traveling crowd from volleyball-mad Poland (which won bronze at last year’s World Cup), the Europeans dominated the Aussies, winning in straight sets 3-0 (25-21, 25-15, 27-25). 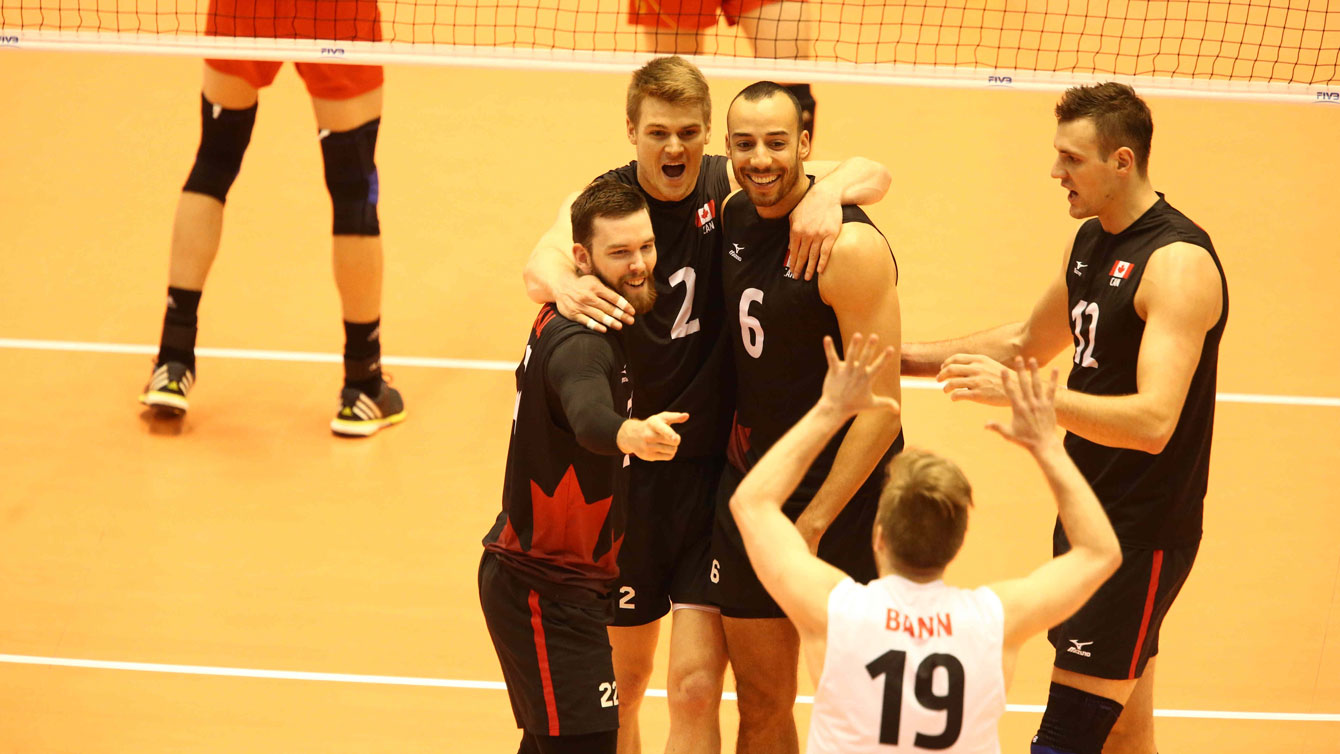 Canada celebrates a point against China on June 5, 2016 in Tokyo at the final Olympic qualifying tournament for Rio 2016 (Photo: FIVB).

That Polish result, combined with key Canadian performances earlier in the tournament such as a victory over Australia and forcing powerful (world number two ranked) Poland to five sets, helped Canada become one of the 12 countries that will play men’s volleyball in Brazil.

Given that only a dozen countries can punch an Olympic volleyball ticket in a sport played world over, Canada’s feat is truly remarkable.

Men’s Olympic volleyball will take place from August 7-21 at the Marcanazinho.