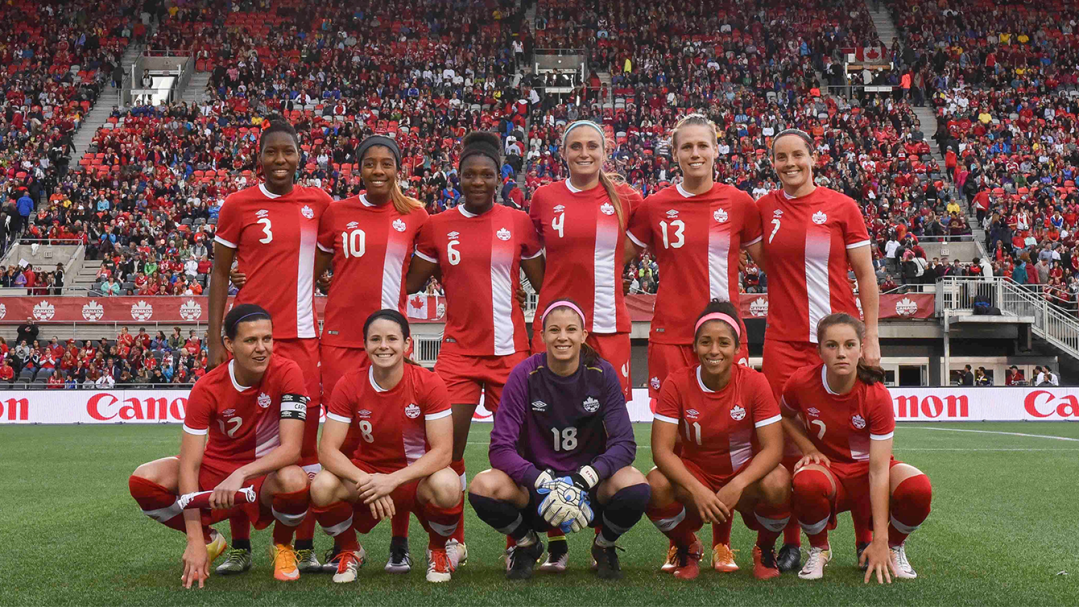 After clinching a berth back in February, the reigning Olympic bronze medal-winning team is now ready to take on the world at the Games once again. 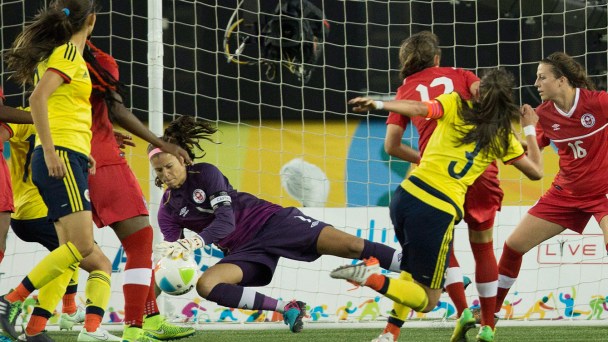 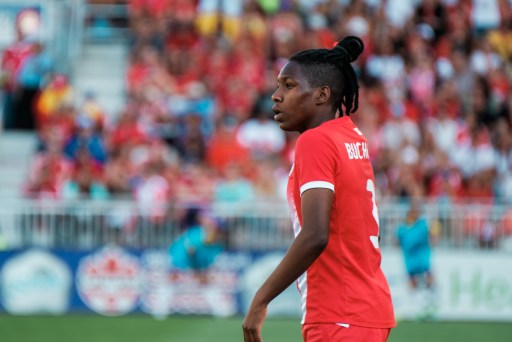 Defender Kadeisha Buchanan led the backline for Canada on June 4, 2016 in an international friendly against Brazil in Toronto. (Thomas Skrlj/COC) 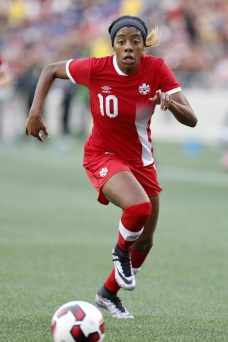 Ashley Lawrence started at midfield for Canada against Brazil on June 7, 2016 (Greg Kolz). 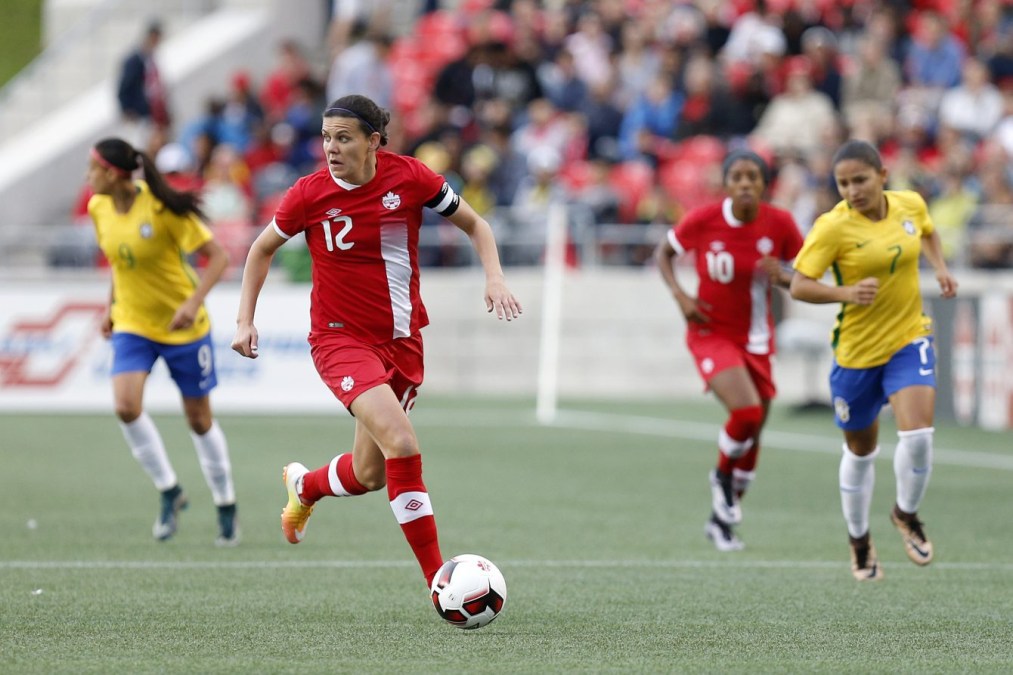 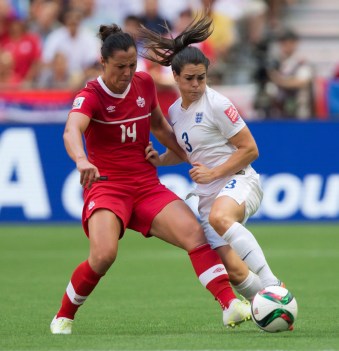 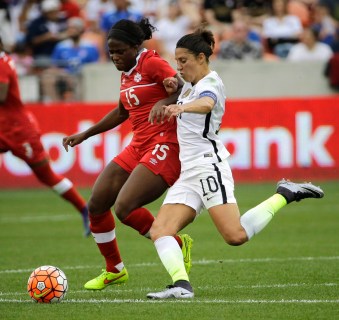 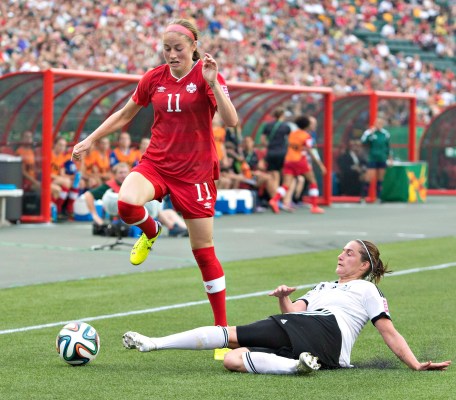 Canada’s Janine Beckie (11) and Germany’s Wibke Meister (15) battle for the ball during second half action of the FIFA U-20 Women’s World Cup quarter-finals in Edmonton, Alta., on Saturday August 16, 2014. THE CANADIAN PRESS/Jason Franson 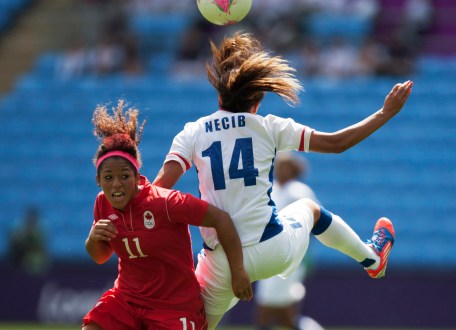 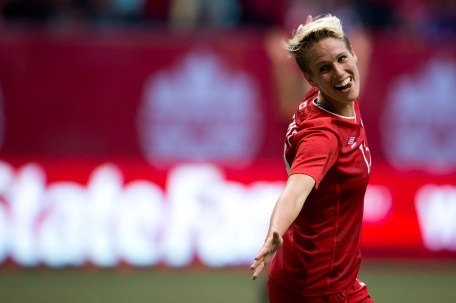 Canada’s Sophie Schmidt celebrates her goal against Germany during the second half of an international women’s soccer game in Vancouver, B.C., on Wednesday June 18, 2014. THE CANADIAN PRESS/Darryl Dyck 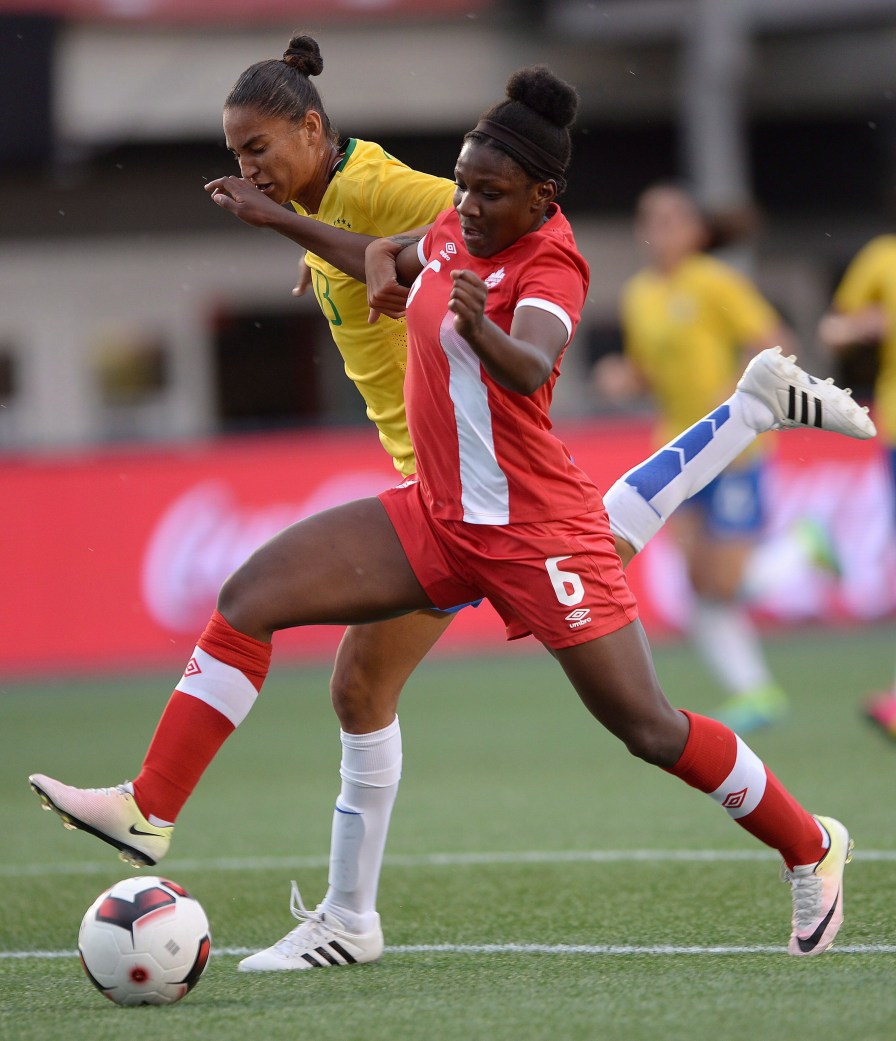 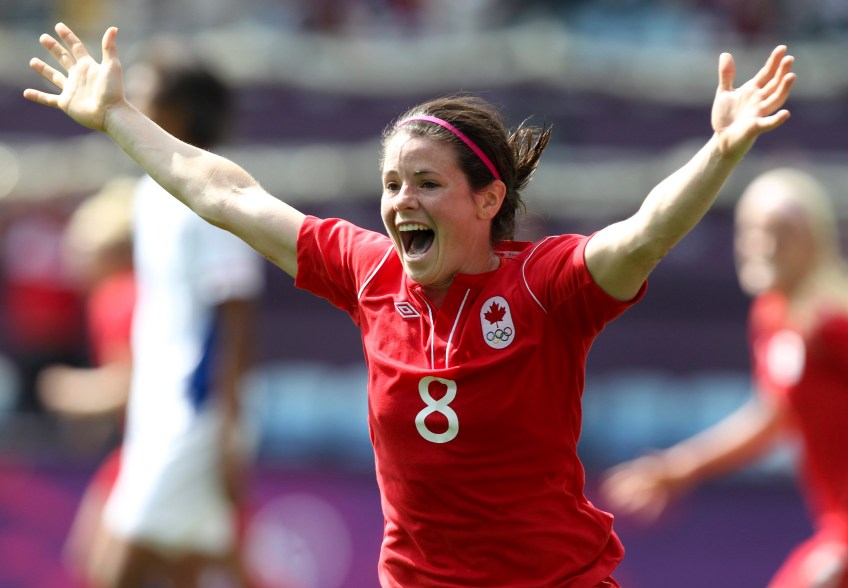 Diana Matheson of Canada celebrates her game winner against France in the bronze medal football match in Coventry at the 2012 London Olympics, Thursday, Aug. 9, 2012. THE CANADIAN PRESS/HO, COC – Mike Ridewood 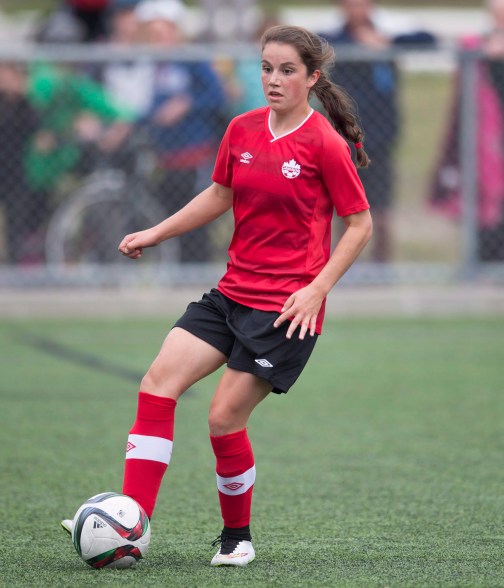 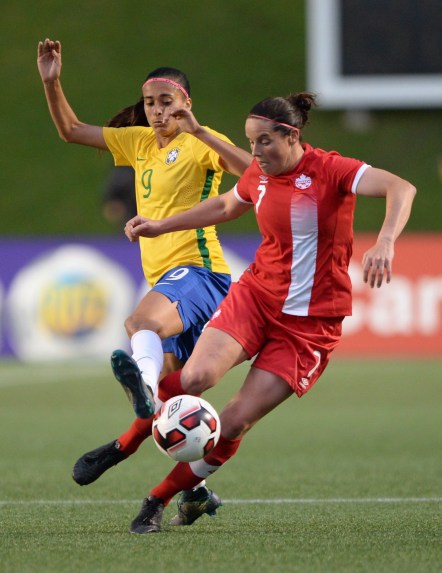 Canada’s Rhian Wilkinson (7) moves the ball away from Brazil’s A. Alves during second half international women’s soccer friendly action in Ottawa on Tuesday, June 7, 2016. THE CANADIAN PRESS/Sean Kilpatrick 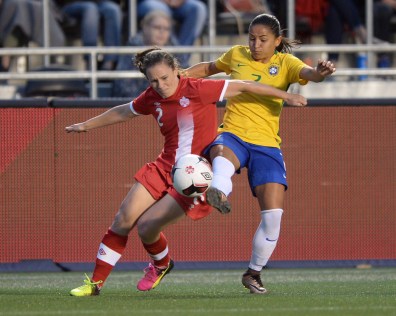 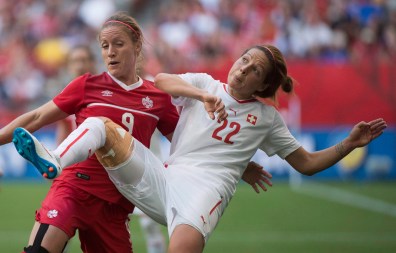 Switzerland’s Vanessa Bernauer, right, fights for control of the ball with Canada’s Josee Belanger during the second half of FIFA Women’s World Cup round of 16 soccer action in Vancouver, B.C. Sunday, June 21, 2015. THE CANADIAN PRESS/Jonathan Hayward 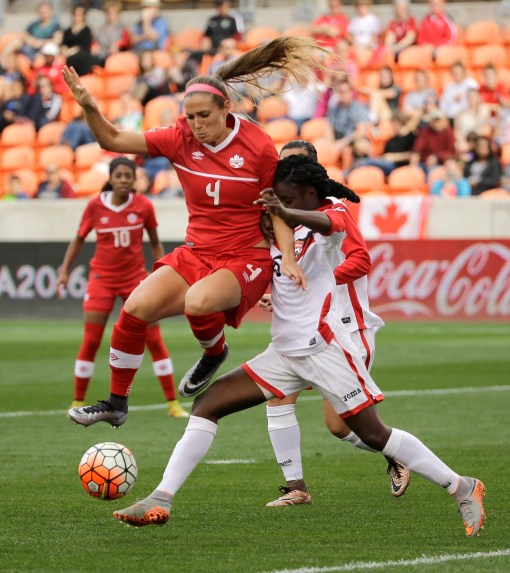 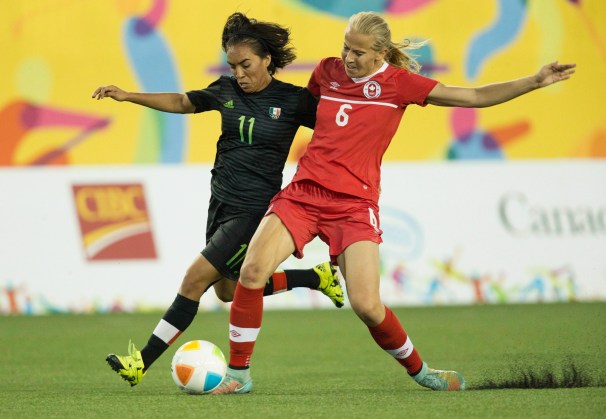 Canada’s Rebecca Quinn (6) and Mexico’s Monica Ocampo (11) fight for ball posession during the first half of the 2015 Pan Am Games women’s bronze medal soccer match in Hamilton, Ontario on Friday, July 24, 2015. THE CANADIAN PRESS/Peter Power 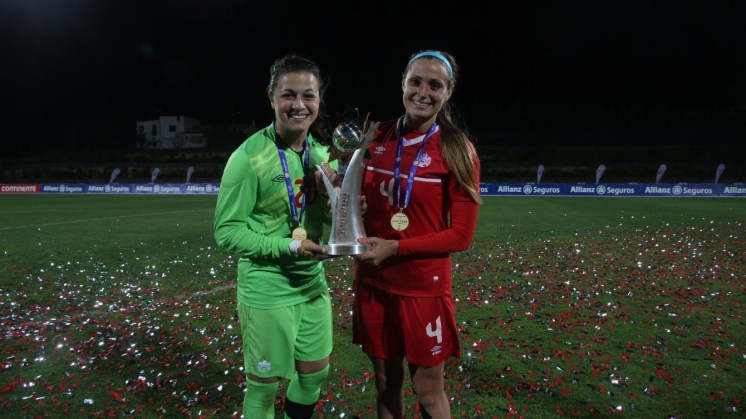 The roster is complete with 18 players from across the country – a mix of fresh faces and long time members. The team will once again be led by Christine Sinclair who will be headed to her third Olympic Games after scoring six goals in the London 2012 tournament and being named closing flag bearer for Canada. Sinclair will be joined by long time teammates Melissa Tancredi, Rhian Wilkinson, Diana Matheson and Sophie Schmidt.

RELATED: All athletes nominated to date

The team is also joined by some newer faces such as Shelina Zadorsky, Kadeisha Buchanan, Nichelle Prince and Janine Beckie – all of whom were elevated to the senior squad in the last four years since Canada competed in London. 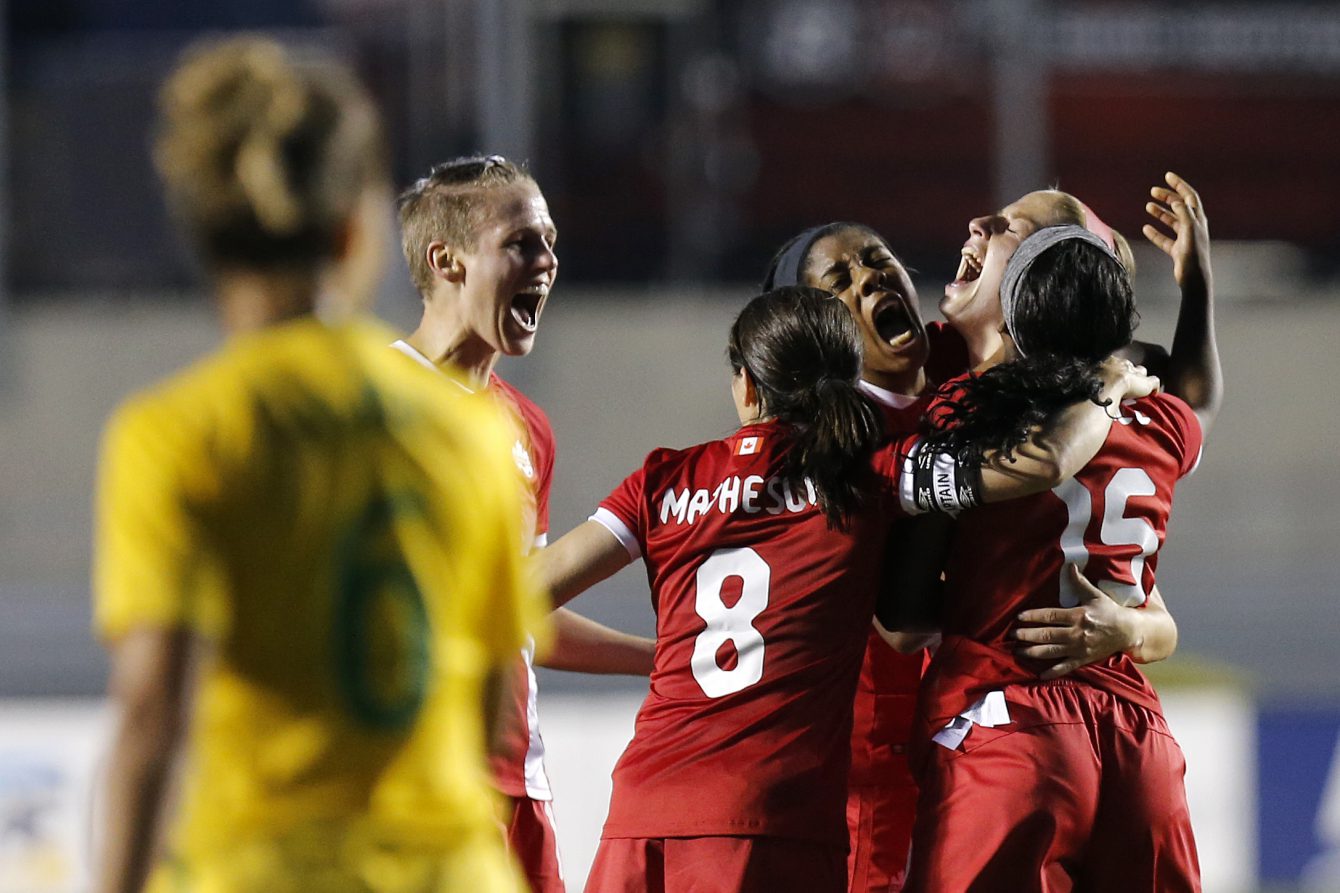 Janine Beckie (right) celebrates her late goal against Brazil to seal a 1-0 win in an international friendly on June 7, 2016 in Ottawa (Greg Kolz).

The team will be bringing along two goalkeepers: Stephanie Labbe and Sabrina D’Angelo. Labbe was the main keeper during TO2015 Pan Am Games for the team and has become the regular starter.

Canada recently played two friendlies against Brazil at home. After a loss in the first match in Toronto, the team went on to Ottawa where Beckie scored a goal during stoppage time leading Canada to victory. 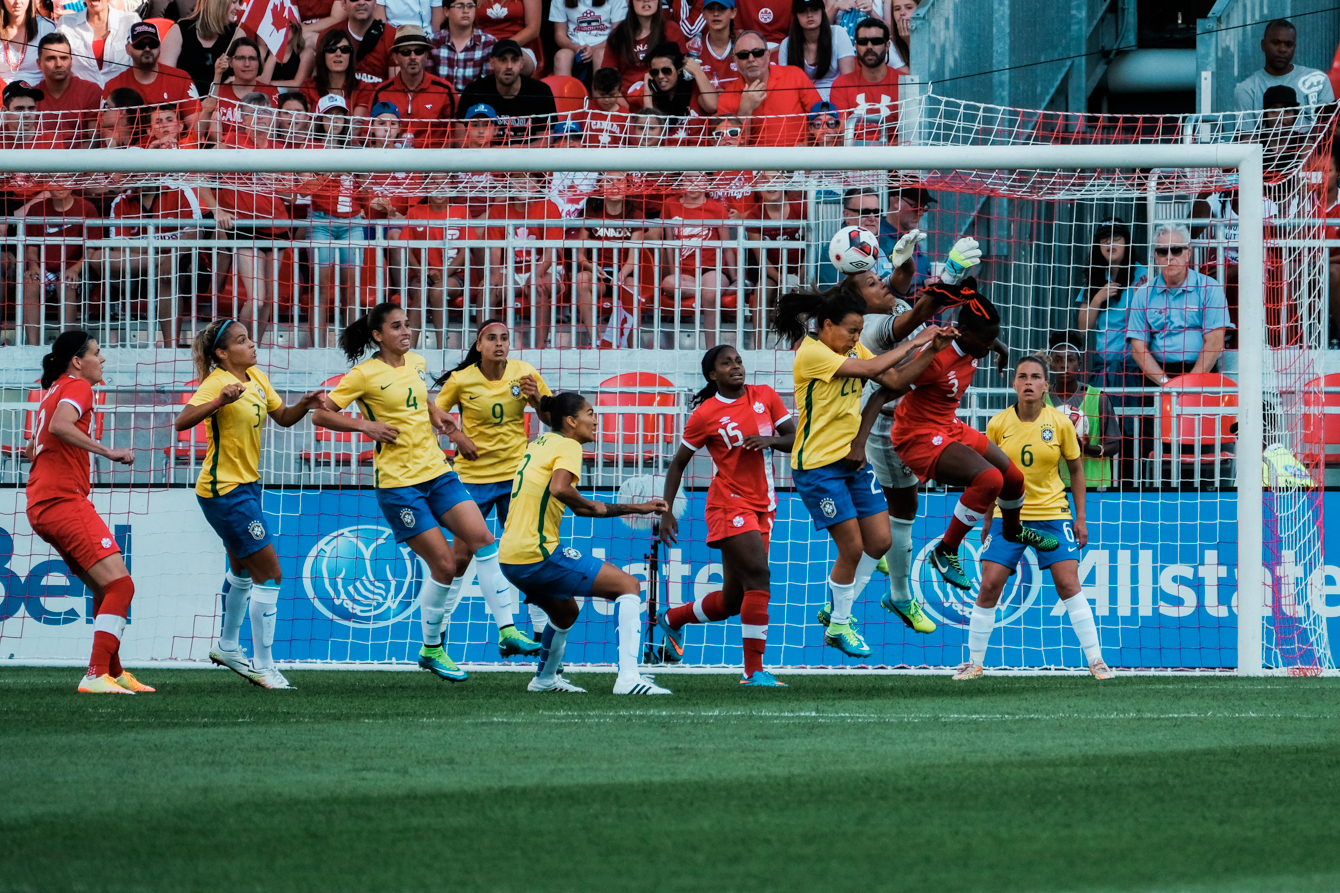 Canada challenging Brazil on a set-piece, though the visitors held the clean sheet for a 2-0 win in Toronto on June 4, 2016.

The team took Olympic bronze four years ago in London after Matheson scored the lone goal against France in the bronze medal match. They now look ahead to Rio for a chance to win gold.

Canada’s path to the podium will not be easy as they have landed in a group with world number two Germany, Australia (no. 5) and Zimbabwe (no. 95th). Canada is ranked no. 10 in the FIFA women’s world football rankings and will open on August 3, 2016 in Sao Paulo at 2:00 p.m. ET against Australia. 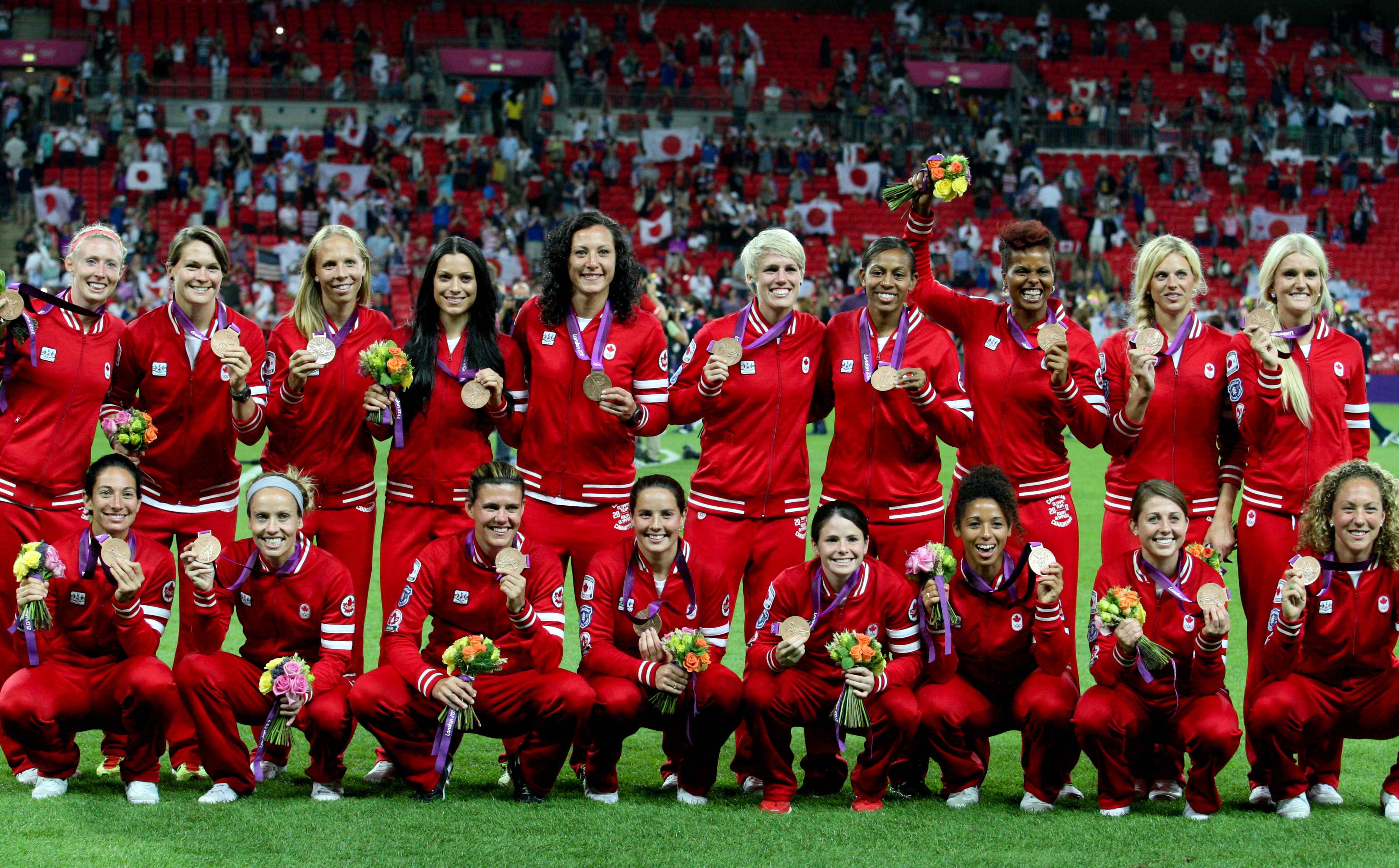 Here is the complete roster: