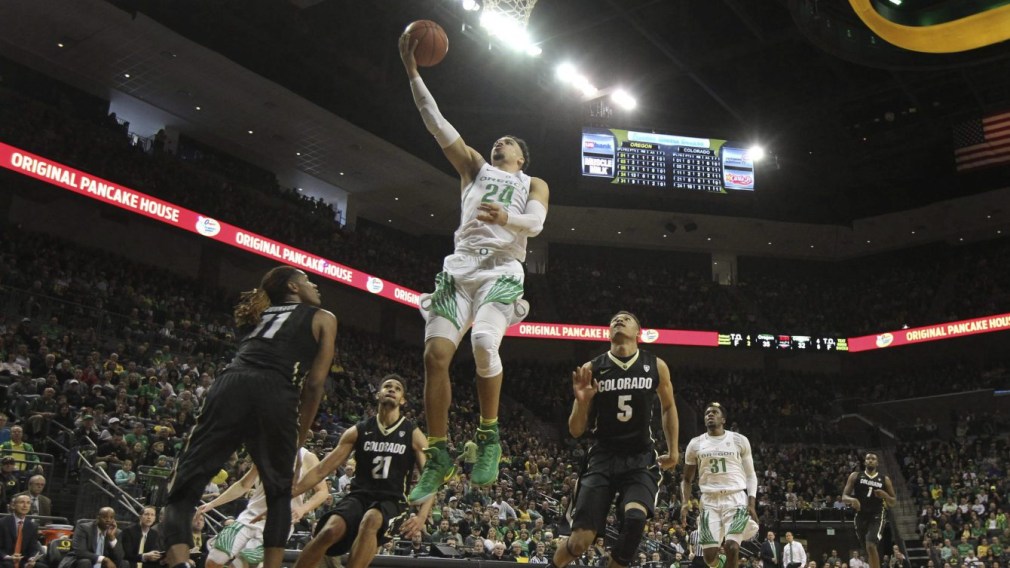 It’s the most wonderful time of the year!

As a former U Sports basketball player, nothing gets me more excited than a little friendly competition. The month of March is in full-swing, which for basketball fans such as myself, means only one thing: March Madness.

Selection Sunday has come and gone, so brackets are ready to be filled out. You can see the full bracket here.

With the rankings released, there are 13 Canadians on the top-10 seeded teams. Third-seed in the West Region – Oregon – has three Canadians on their roster (two healthy), all of whom will play a pivotal role in their tournament success. Once again, the team with the most Canadians is the 14th-seed in the East, New Mexico State, with four Canadians on its roster.

Up to 25 Canadians could see court time during the NCAA tournament, which officially begins on March 14 with the at-large games.

Overall, there are three provinces represented in this year’s tournament: Ontario, Quebec and British Columbia. Ontario leads with a total of 21 players, most calling Toronto and the GTA home.

Here’s a look at some of the standout Canadian players in this year’s tournament: 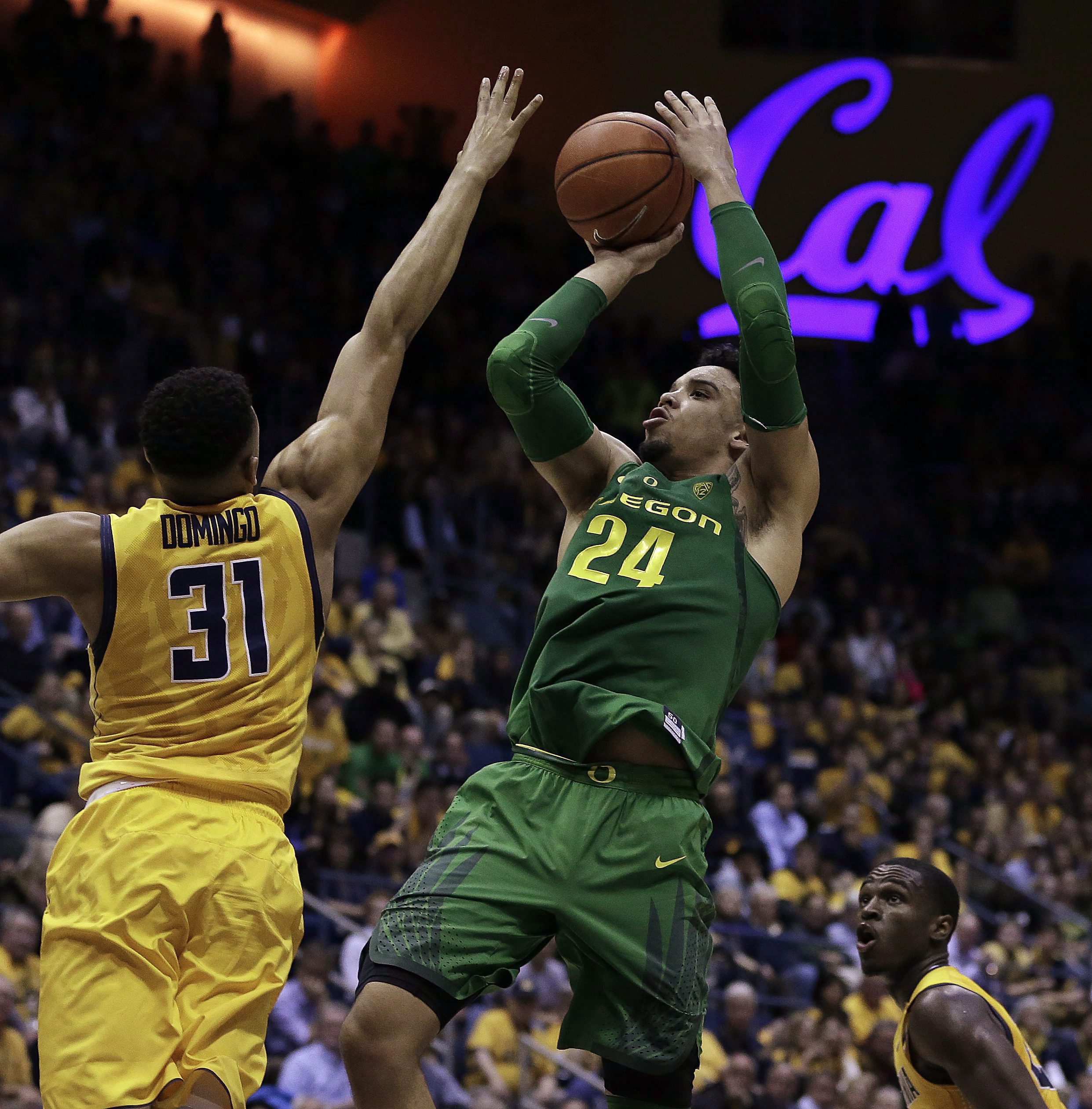 PAC-12 Player of the Year Dillon Brooks (24) will look to carry the third-seeded Oregon Ducks all the way to the championship. (AP Photo/Ben Margot)

A silver medalist at the Toronto 2015 Pan American Games, Brooks was recently named the PAC-12 Player of the Year. Averaging over 16 points per game, Brooks led the Ducks to a 29-5 record in the 2016-17 season. He finished with a team-high 25 points in Oregon’s loss against the second-seed Arizona in the PAC-12 Final. Heading into the tournament seeded third in the West Region, the junior forward is hoping to push his team past the Regional Finals, where they were eliminated by Oklahoma last year. 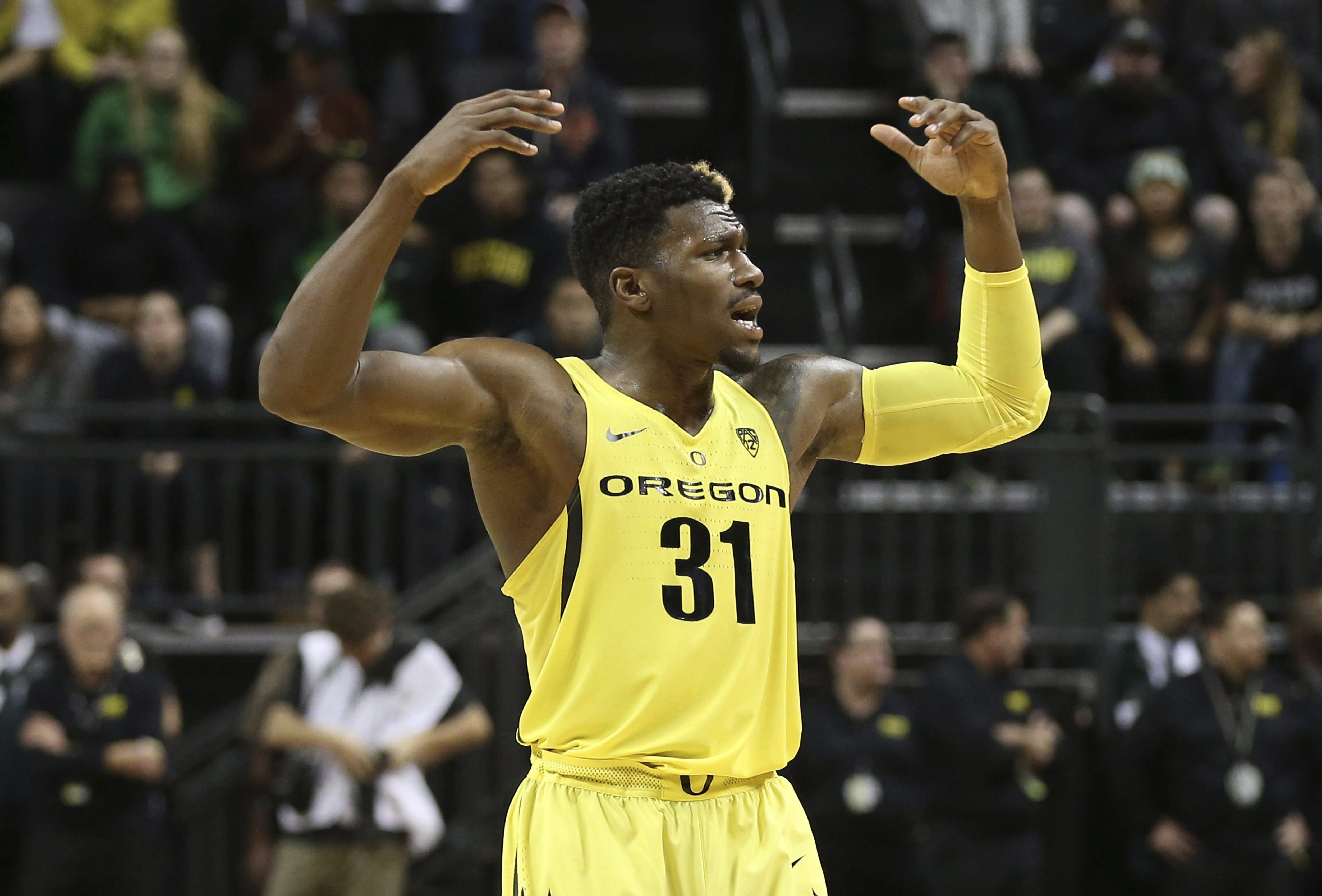 Oregon’s Dylan Ennis will be putting in lots of court time for the Ducks as they face Iona in the first round. (AP Photo/Chris Pietsch)

Younger brother of Canadian National Team member Tyler Ennis, Dylan is following in his brother’s footsteps after a stellar season. The 6 foot 2 senior guard averaged almost 11 points per game this season, and led the Ducks in minutes played per game with 30.7. 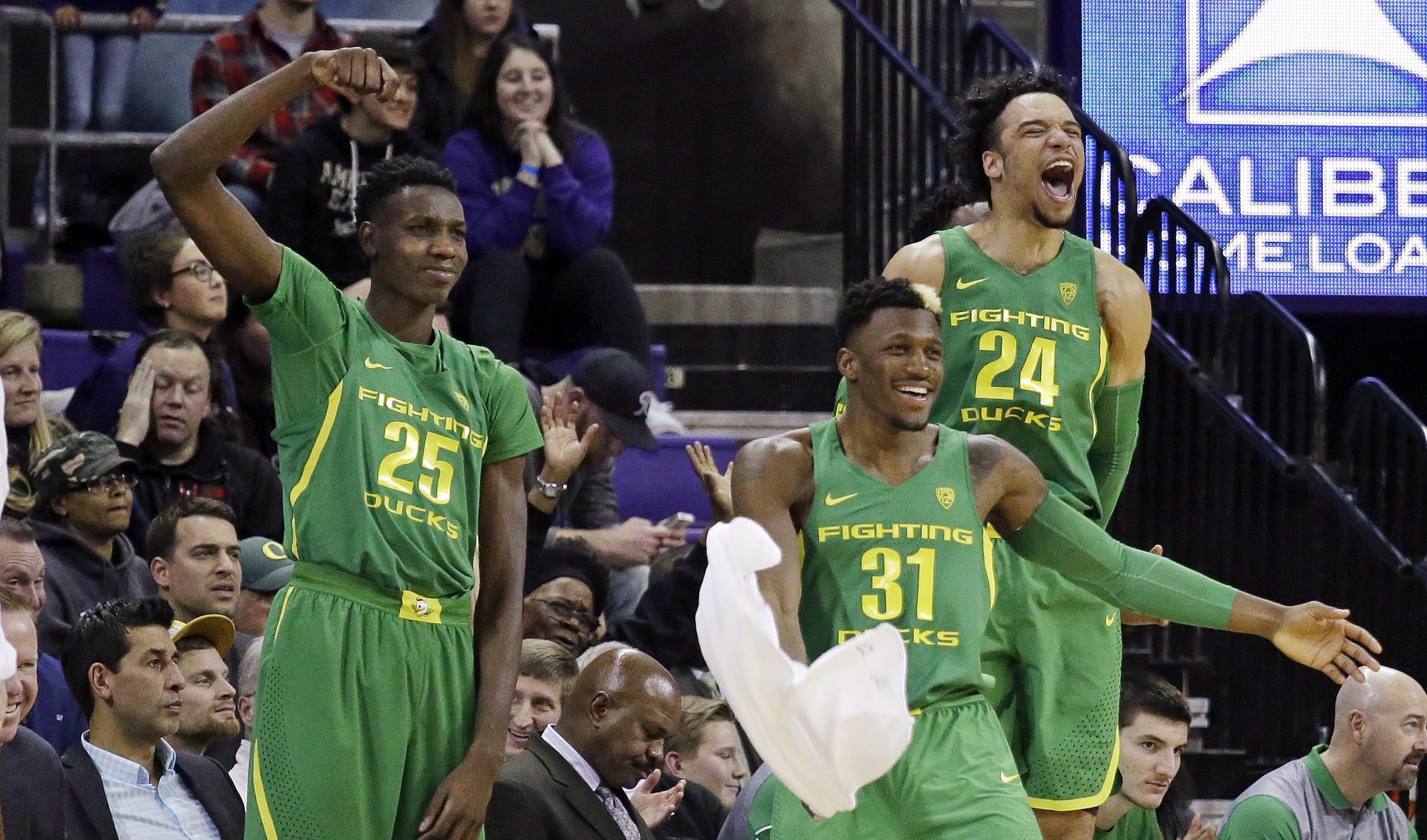 The third and final Canadian on the Ducks roster is Chris Boucher. The 6 foot 10 senior from Montreal was named to the PAC-12 All-Defensive Team for the second year in a row. Boucher was a force to be reckoned with in the key, averaging 2.6 blocks, 6.1 rebounds and 11.9 points per game. However, in the Pac-12 semifinal on Friday night, Boucher tore his ACL subsequently ending his season and NCAA career a few weeks early. 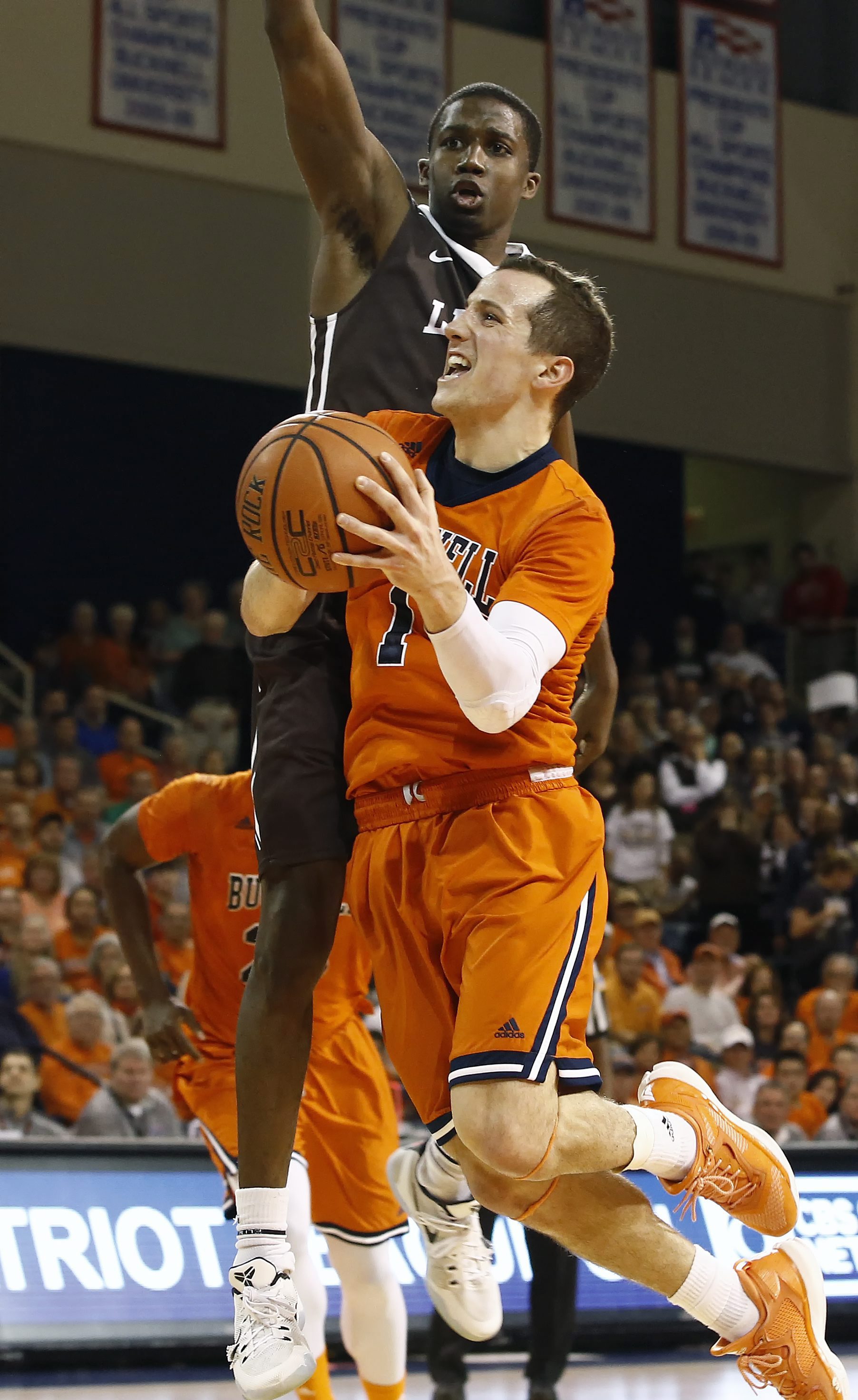 Bucknell’s Kimbal Mackenzie (1) looks to continue his stellar performance from the Patriot League Conference Final into the first round against West Virginia. (AP Photo/Chris Knight)

Leading his team in the Patriot League Conference Final with 18 points, Mackenzie is looking to do the same in the NCAA tournament. The 6 foot 1 guard averaged 11.3 points per game this season, almost 7 points less than the 18 he scored in the conference title. Although Bucknell will be the underdog, playing fourth-seed West Virginia in the first round of the West Region, an upset could be in the making if Mackenzie continues to put up big numbers. 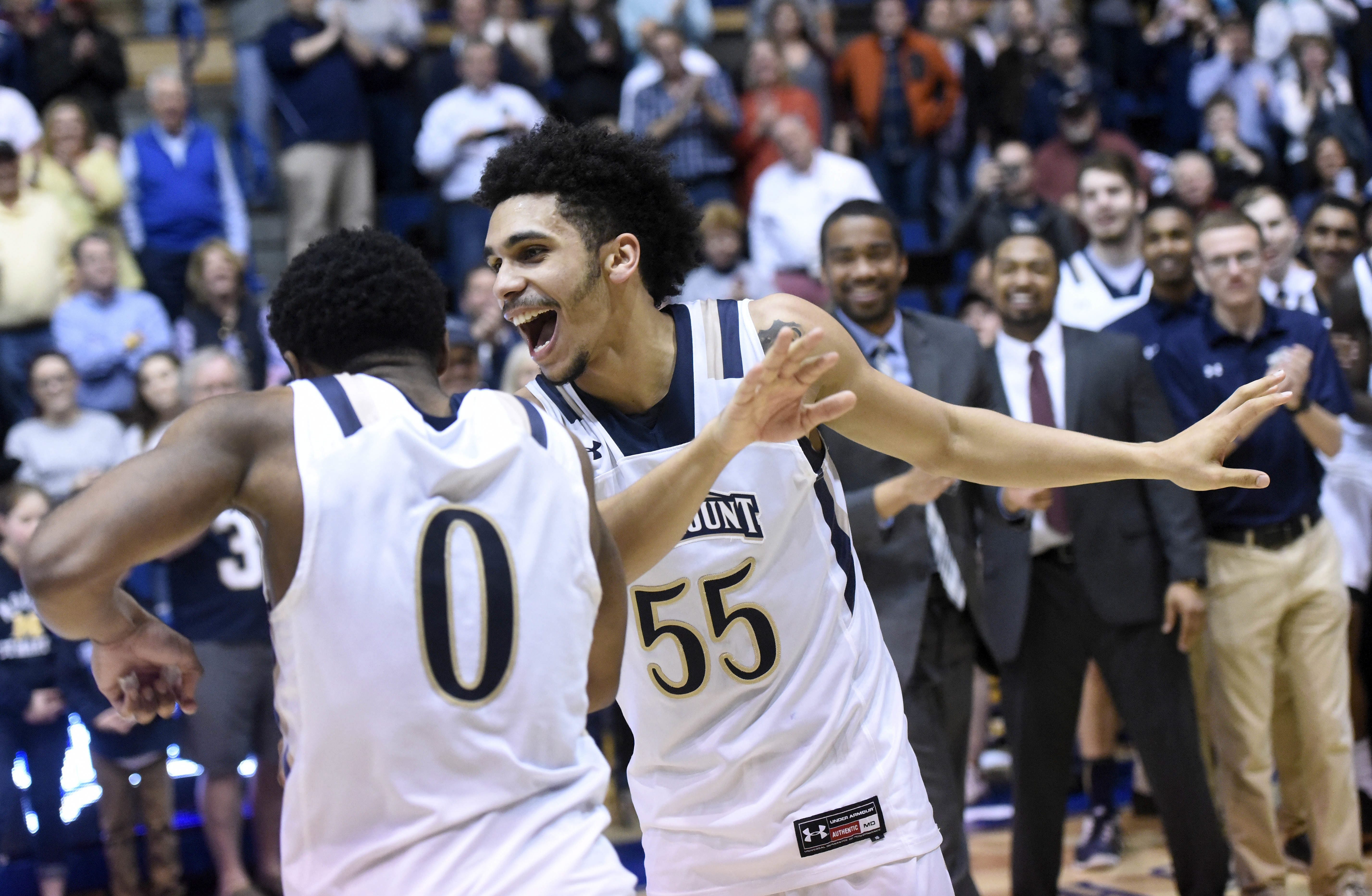 Mount St. Mary’s guard Elijah Long (55) will play in the at-large game against the University of New Orleans in the hopes of entering the first round. (AP Photo/Steve Ruark)

Another Canadian that could be at the forefront of a first round upset. Sophomore guard Long is heading into the tournament seeded 16th in the East Region. He and the Mountaineers beat the University of New Orleans on March 14 in the at-large game, booking their ticket to the first round in the East Region against first-seed Villanova. In the conference finals, Long came up big, scoring a team-high 24 points to lead the Mountaineers to a 71-61 victory. Elijah isn’t the only Long in the tournament; his brother Naz is a top guard on the Iowa State Cyclones. 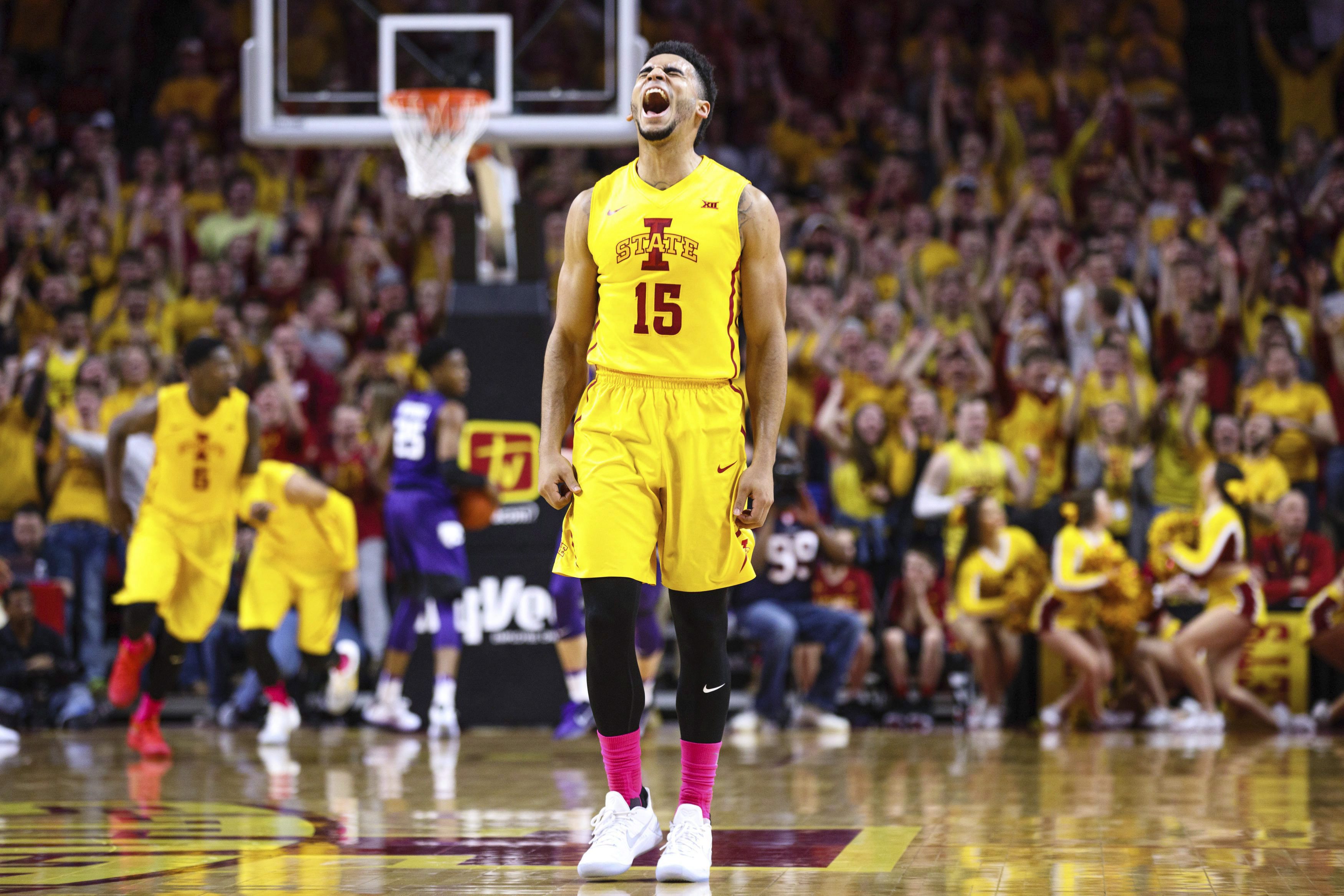 The senior guard for the Cyclones is looking to finish off his NCAA career on a high note. The elder Long finished the season averaging 15.9 points per game and helped lead his team to a 23-10 record. Next up for Long? A first round game against 12th-seed Nevada in the Midwest Region. The fifth-seed Cyclones are looking to get past the Sweet Sixteen, where they were eliminated last year by the Virginia Cavaliers. 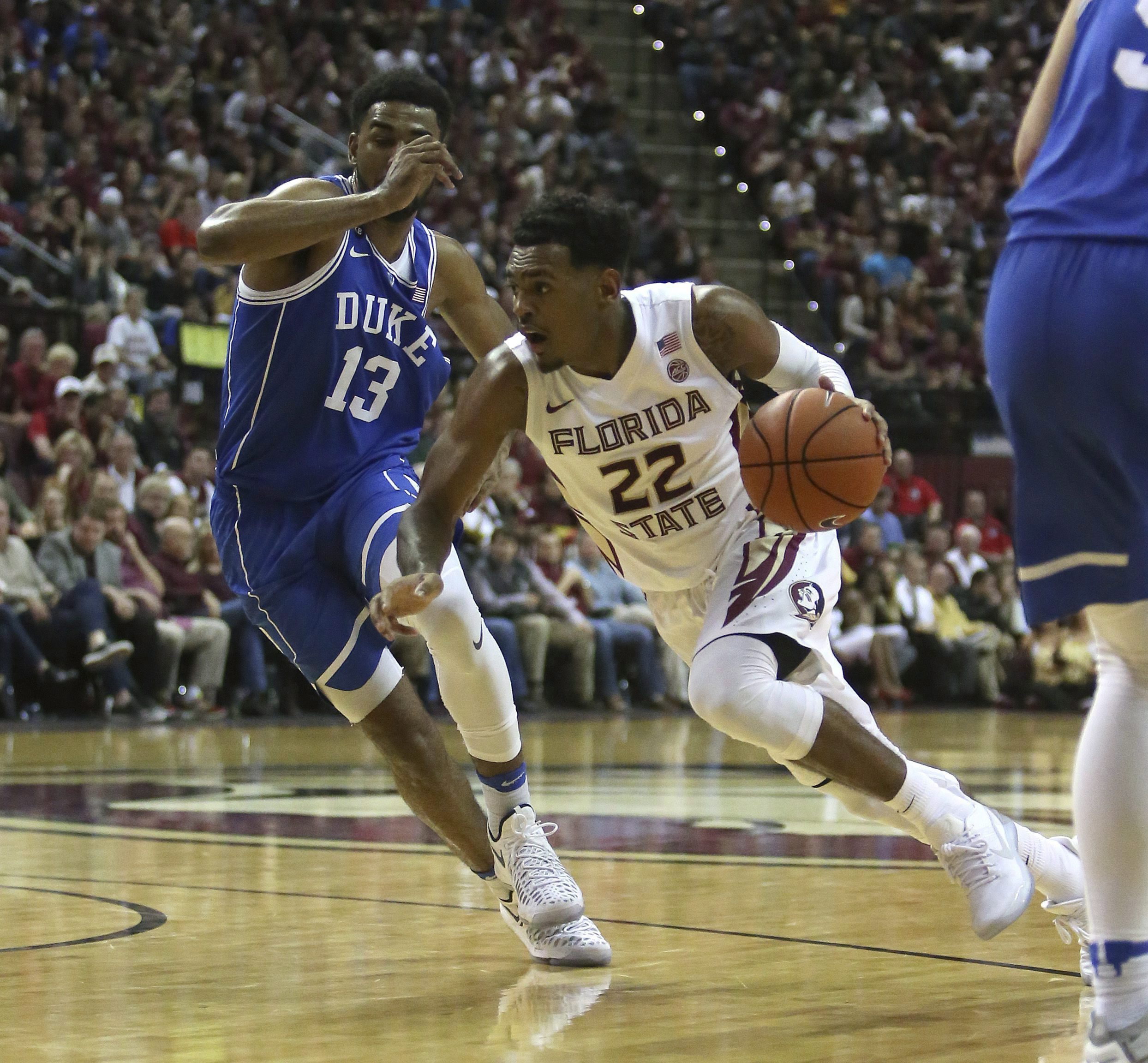 West Region third-seed Florida State will be tipping off against 14th-seed Florida Gulf Coast in the first round on March 16. Heading into the tournament with a 25-8 record, the Seminoles and 6 foot 4 junior guard Rathan-Mayes will be playing their first NCAA Tournament game since 2012. Rathan-Mayes plays a key role in the team’s success, contributing 10.3 points, while grabbing 3.0 rebounds and dishing out an impressive 4.8 assists per game. 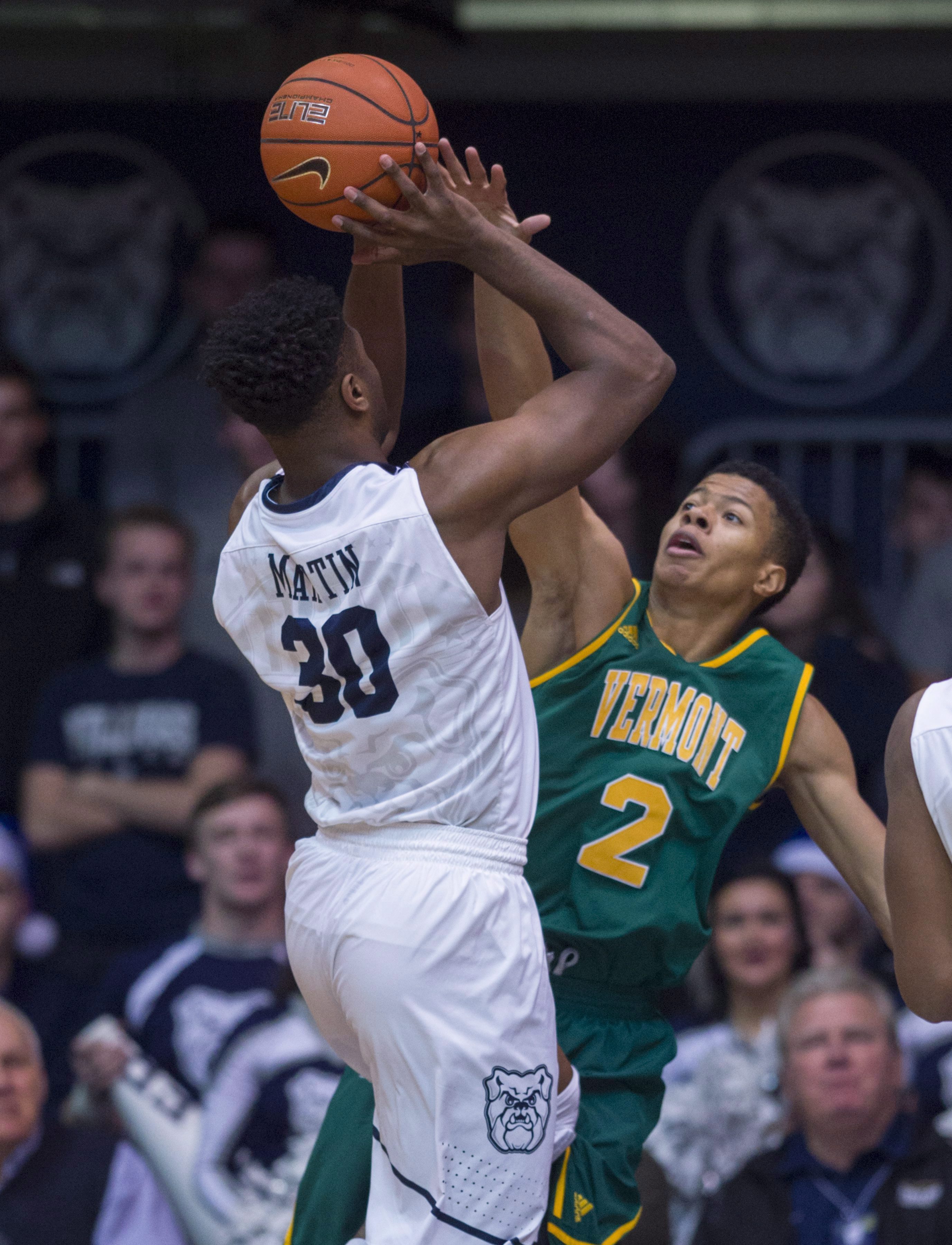 Vermont guard and America East Player of the Year Trae Bell-Haynes (2) is looking to upset Purdue in the first round. (AP Photo/Doug McSchooler)

Winning the America East Player of the Year, Bell-Haynes helped his team capture the America East title, securing their spot in the NCAA Tournament. Averaging 11.2 points, 2.5 rebounds and 3.8 assists per game, Bell-Haynes and the Catamounts finished the season 29-5 and head into the tournament seeded 13th in the Midwest Region. They will face fourth-seed Purdue on March 16. 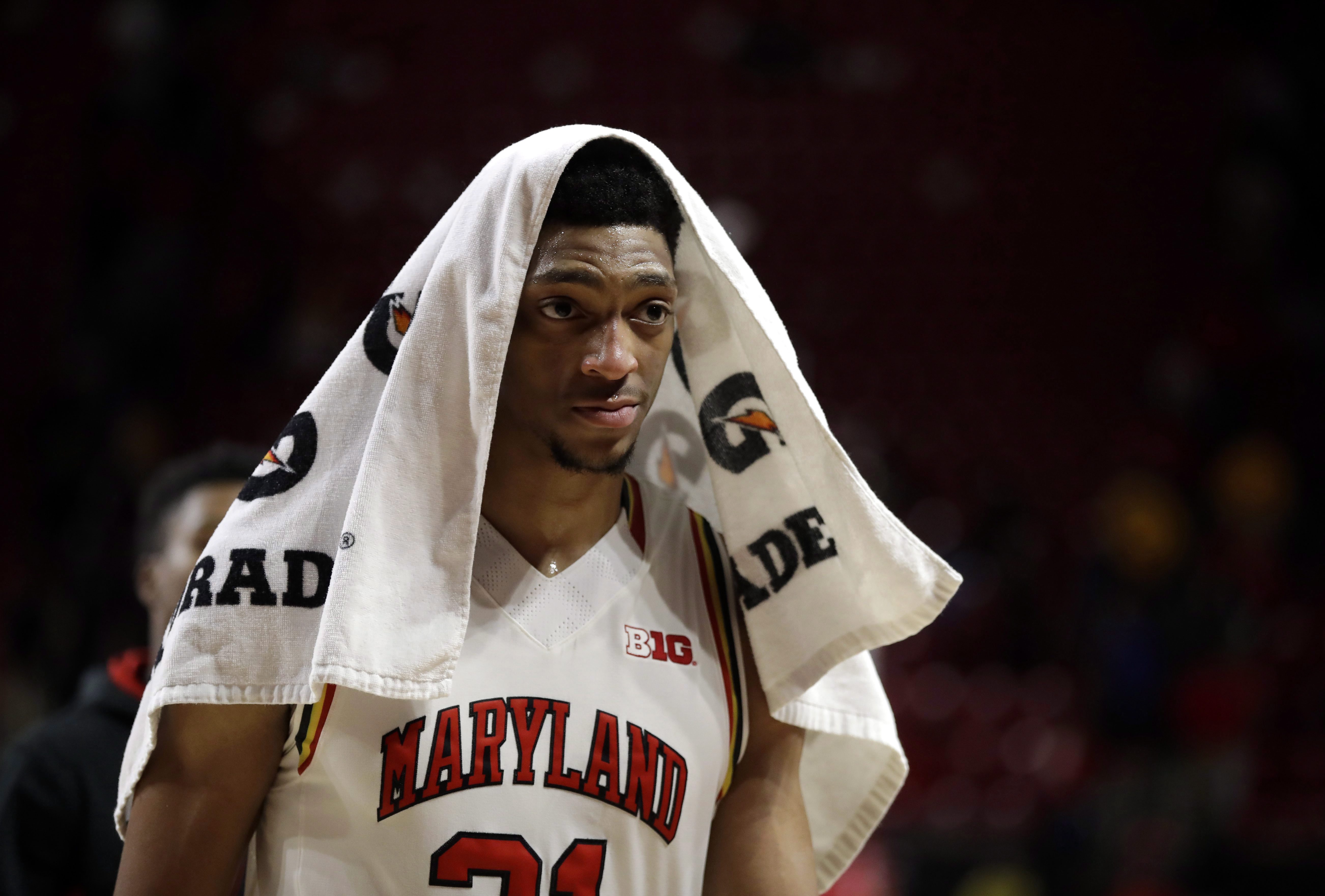 Freshman forward Justin Jackson heads into his first NCAA tournament seeded sixth in the West Region. Maryland will face 11th-seed Xavier in the first round. Jackson put up impressive stats for a rookie. The 6 foot 7 forward helped his team to a 24-8 record with 10.7 points, 6.2 rebounds and 27.5 minutes per game. 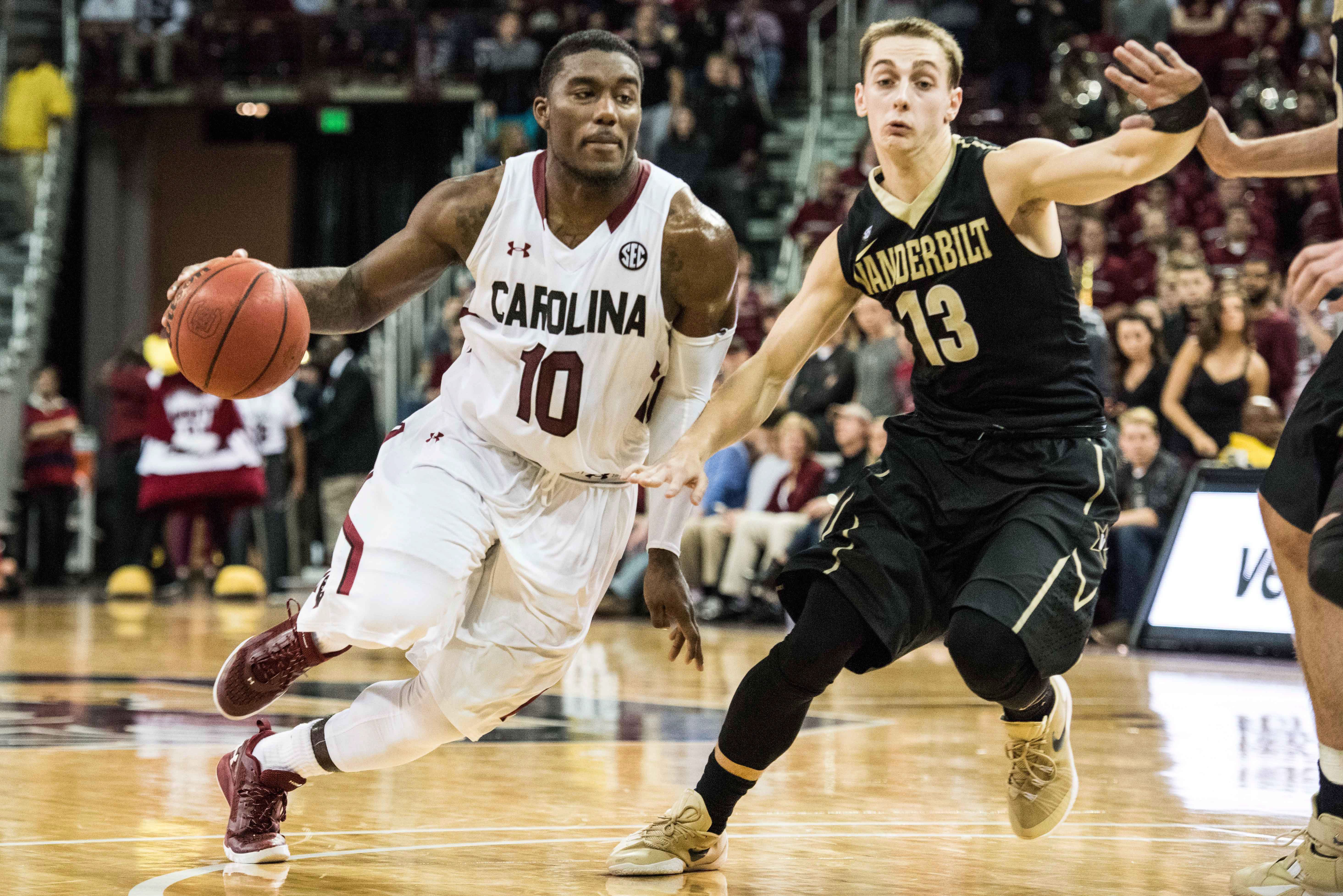 South Carolina guard Duane Notice (10) will look to move past Marquette in the first round. (AP Photo/Sean Rayford)

The Toronto native and seventh-seed South Carolina Gamecocks will battle with 11th-seed Marquette on March 17 for a chance to play in the second round of the East Region. The 6 foot 2 senior guard averaged 10.4 points, 2.3 rebound, 2.3 assists and almost 33 minutes of play per game in the Gamecock’s 22-10 season.

If you aren’t sure who to pick in your bracket, taking a team with a Canadian on the roster is always a good bet.

Here is the complete list of all Canadians in the NCAA Tournament, by region.

Canadians to watch during men’s March Madness
Ana Padurariu: Facing the never-ending challenges of 2020
What is the difference between racquetball and squash?
Shuttlecock and balls: The fastest moving objects in sport
Team Canada Athletes Train at Home
Getting vertical: The highest jumps in sport