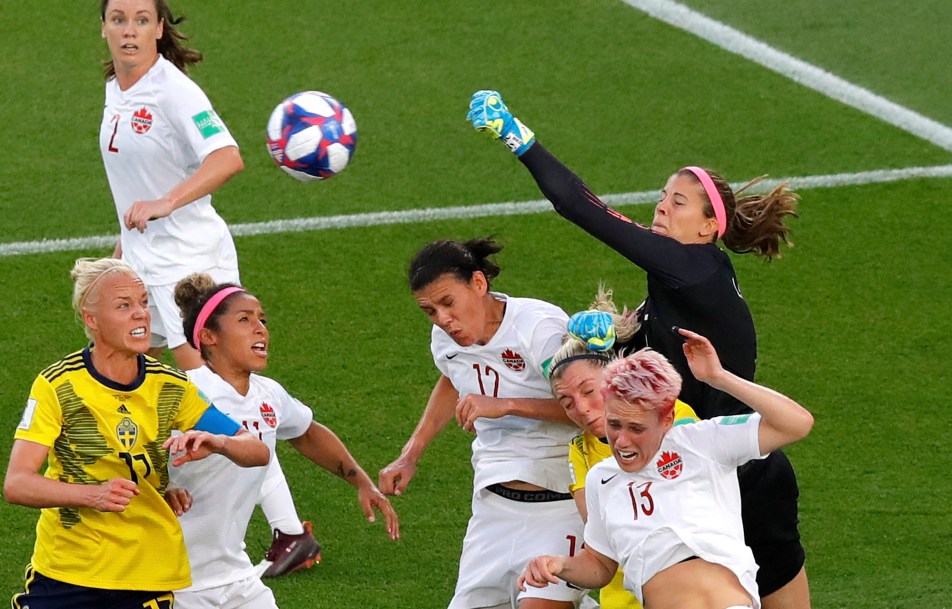 Canada’s World Cup journey came to an end on Monday with a 1-0 loss to Sweden.

The match remained scoreless going into halftime. Christine Sinclair had a free kick in the 53rd minute, but the shot went wide.

At the 55′ mark of the game Stina Blackstenius got the Swedes on the board after a giveaway from Canada. 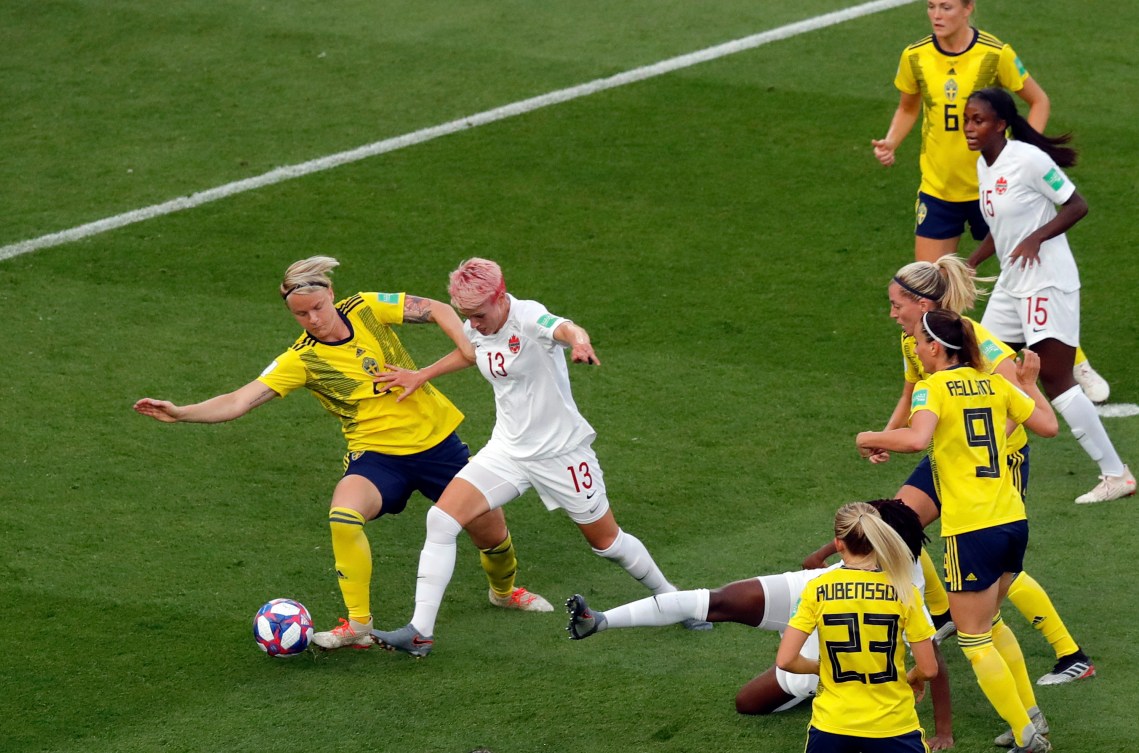 Sweden’s Nilla Fischer, left, vies for the ball with Canada’s Sophie Schmidt during the Women’s World Cup round of 16 soccer match between Sweden and Canada at the Parc des Princes in Paris, France, Monday, June 24, 2019. (AP Photo/Michel Euler)

Canada had a chance to tie the game up when they were awarded a penalty kick at the 68′ mark. However, Hedvig Lindahl made a diving save against Janine Beckie’s attempt to score.

#CAN draws the PK, but no luck for Janine Beckie. #FIFAWCC pic.twitter.com/2VYnB0b5lc

For the rest of the match Canada continued to put the pressure on, with several offensive attempts stopped by the Swedes. At the 81st minute, Sweden thought they had a penalty, from Ashley Lawrence taking down Blackstenius. However, it was overturned after VAR video review.

In the eight-plus minutes of stoppage time Canada was unable to get on the scoreboard.

Coming into the tournament, Canada was ranked fifth. In their first three games, they had a record of 2-1 to set up a Round of 16 matchup with Sweden.

Thank you #CanadaRED for your unwavering support of #CanWNT pic.twitter.com/l9lHVMKekY

The next Women’s World Cup will be held in 2023. Ten countries will bid for the tournament: Argentina, Australia, Bolivia, Brazil, Colombia, Japan, New Zealand, South Africa and South Korea.

Canada dropped its third match 2-1 to the Netherlands on Thursday at the FIFA Women’s World Cup in Reims, France. The Canadians will face either the United States or Sweden in the Round of 16.

In the first minute of the match, Canada’s Janine Beckie was tripped up by Desiree van Lunteren, earning Canada a penalty. However, it was ruled that the foul took place outside the box after a VAR review, and Canada was awarded a free kick instead.

The Dutch continued to apply pressure on Canada through the first half and into the second.

In the second half, Dutch forward Sherida Spitse took a free kick, leading to a header goal from Anouk Dekker at the 54′ mark.

A goal for #NED put them up 1-0 over Canada… but not for long. #FIFAWWC pic.twitter.com/klKbKqsY9H

Not long after, at the 60th minute, Christine Sinclair scored goal number 182 of her international career to tie the game up.

Christine Sinclair's (@Sincy12) 182nd international goal brings her two away from the all-time record and draws #CAN even with #NED in their battle for the top of Group E. @CanadaSoccerEN #FIFAWWC pic.twitter.com/2KSqkH9X05

The Netherlands pulled ahead 2-1 in the 75th minute with a goal from Lineth Beerensteyn.

Canada finishes the preliminary round in second place with six points. They needed to defeat the Dutch in order to win Group E and face Japan in the Round of 16.

Now they will wait for the outcome of the US versus Sweden match to see who they will face for the next round. Canada will play the loser of the match.

Team Canada qualified for the Round of 16 at the FIFA Women’s World Cup after beating New Zealand 2-0 this evening. After shutting the New Zealanders out at Stade des Alpes in France, the Canadian squad secured the eight place spot in the tournament.

The first half of the game proved to be a defensive showdown on both ends of the field, as the first point of the game did not come until the 48th minute.

See you in the Round of 16!#FIFAWWC pic.twitter.com/flI0ZuOTYQ

Although, in spite of the scoreless first half, Canada played a dominant game against New Zealand. During the first 45 mins of play, Canada had possession of the ball 73 per cent of the time, completed 85 per cent of their passes and made 11 shots (to New Zealand’s one).

After the break, Jessie Fleming wasted no more time to get the Canadians on the board. At the 48th minute, Fleming was able to slot in her goal past New Zealand netminder Erin Naylor off a solid pass from Nichelle Prince. Following the game, Fleming was named player of the match.

Next up, it was Prince’s turn to score who secured Canada’s victory with their second goal of the match at the 79th minute. Prince’s goal came off a missed goal from Canadian captain Christine Sinclair. When Sinclair’s header hit the post, 24-year-old Prince made sure to capitalize. This was Prince’s first goal of the Women’s World Cup and 11th for Team Canada.

Nichelle Prince pounces on the loose ball and makes it a 2-0 game for @CanadaSoccerEN!#FIFAWWC pic.twitter.com/emwi94x995

This win marks the first time in history that the Canadian women opened the World Cup with two straight wins. This victory is also Canada’s 10th win of the year (7-0-3) – its second longest streak without defeat.

Canada will hope to carry their momentum with them when they travel to Reims, France where they are set to take on the eight-ranked Netherlands on Thursday.

Canada’s Kadeisha Buchanan scored Canada’s lone goal against Cameroon on Monday at the FIFA Women’s World Cup in Montpellier, France.
For the first half of the game, Canada had a 69 per cent possession rate.

By the 42nd minute it was still scoreless, looking like the game was heading into halftime tied 0-0.

Then at the 45′ mark of the match, Buchanan scored her first-ever World Cup goal. It was also her first goal in three years for Canada.

In the second half of the game, Cameroon tried to tie it up, but were unsuccessful in their efforts. Canada had several chances to extend its lead.

Near the 88th minute, team captain Christine Sinclair had a chance to increase Canada’s lead, but her attempt was blocked by a Cameroon defender.

#CAN with a great opportunity to double its lead, but they are denied.#FIFAWWC pic.twitter.com/eUsYScEHLb

With the victory, Canada earns three points. Next up they will head to Grenoble to face New Zealand at 3pm ET on June 15.