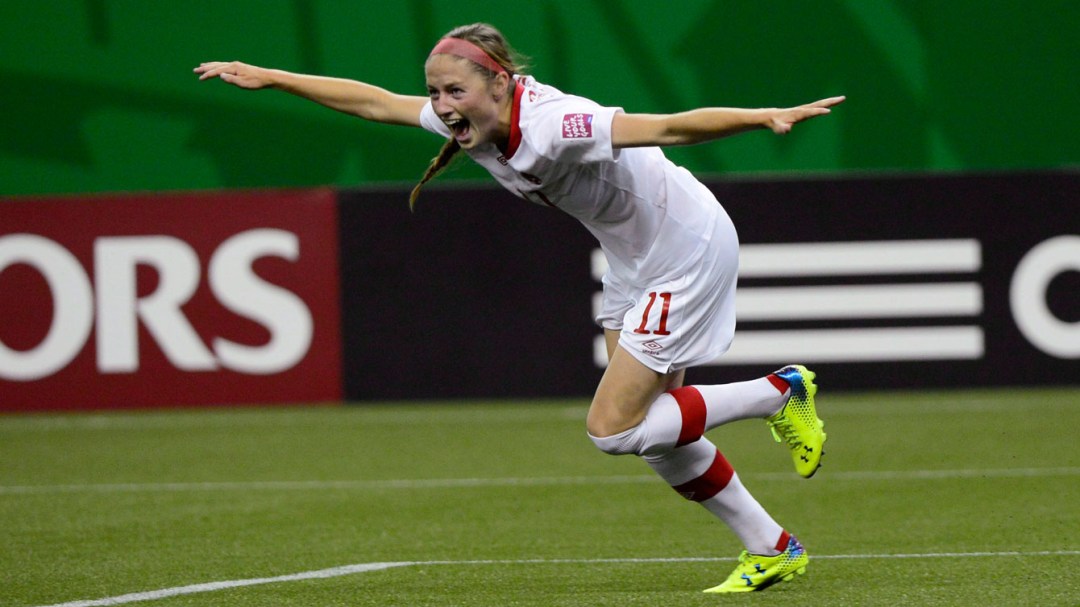 In her second Olympic appearance, Janine Beckie helped Canada win the gold medal at Tokyo 2020. She scored both goals in a 2-1 preliminary round victory over Chile and played at least 90 minutes in four of Canada’s six games.

Beckie made her first appearance with Canada at the 2014 FIFA U-20 World Cup where she scored twice in four games, helping Canada reach the quarterfinals. She made her senior team debut later that year in a friendly against Sweden and played in the 2015 Cyprus Cup.

After scoring her first senior international goal against South Korea in January 2015, Beckie notched two against Ecuador in Canada’s opening match of the 2015 Pan Am Games, where the team finished fourth overall. That year, she was the last cut from the team that would compete at the 2015 FIFA Women’s World Cup, something that took her time to grasp but ended up changing her mindset.

She would go on to score once in each of her two appearances in the CONCACAF Olympic Qualifier where Canada finished second to earn a spot in Rio. With two goals, Beckie was Canada’s top goal scorer in winning the 2016 Algarve Cup. In her Olympic debut, she scored in the first minute of Canada’s opening game against Australia at Rio 2016, and added another two goals in their second match against Zimbabwe. She finished tied for the team lead with three goals, helping Canada to a bronze medal.

Since Rio 2016, Beckie has been a part of another pair of podium finishes at the Algarve Cup, winning silver in 2017 and bronze in 2019. In 2018 she competed in her first CONCACAF Championship, scoring two goals and helping Canada come away with a silver medal. The following year she made her FIFA Women’s World Cup debut, starting all four games for Canada at France 2019 as they bowed out in the round of 16 against Sweden.

In 2020, Beckie scored a hat trick against Jamaica during the CONCACAF Olympic Qualifying Tournament. Canada went on to finish second, booking their ticket to Tokyo 2020. In 2021 she played with Canada at the inaugural She Believes Cup, finishing third.

Beckie played collegiately for Texas Tech from 2012 to 2015. She finished her Red Raider career as the school’s all-time leading scorer with 57 goals. She was a four-time selection to the All-Big 12 first team and was twice the Big 12 Offensive Player of the Year. In her freshman year she was awarded the Big 12 Rookie of the Year and named to the All-American Second Team as she led the Big 12 in shots and goals and finished third in the country in goals by a freshman with 14. As a junior, she was named an All-American and finished ranked among the top 15 players in the country.

Beckie turned pro in 2016 and played three seasons in the NWSL before joining Manchester City of the FA WSL. Her first year overseas in 2018-19 she scored eight goals in 15 matches, helping City win the FA Cup and League Cup. In 2019-20 she won the FA Cup for the second year in a row and scored a hat trick in her first Championships League start.

A Little More About Janine

Getting into the Sport: Started playing soccer at age 4, following in her older siblings’ footsteps… Did not specialize in soccer until university, previously doing basketball, lacrosse, hockey, gymnastics and track… Outside Interests: Has a passion for helping underprivileged kids and plans to start her own non-profit for kids to play sport… Graduated from Texas Tech University with a degree in Media Strategies in 2017… Would like to pursue interior decorating and buying and renovating old homes… Enjoys coffee, cooking, being in the gym… Odds and Ends: Favourite quote: “To give anything less than your best is to sacrifice the gift” – Steve Prefontaine… Nickname: Neener… Older brother Drew plays professional soccer in the Canadian Premier League… Grew up in Colorado where her Saskatchewan-born parents moved for her father’s work before she was born…