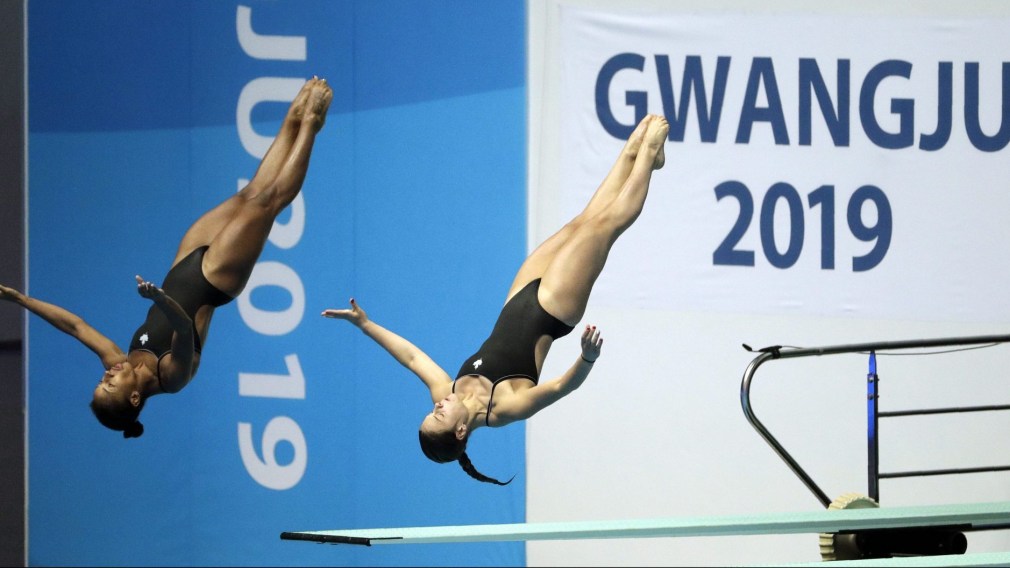 There were first-time podiums, national records and a Tokyo 2020 qualification this weekend for Team Canada’s athletes.

Nothing quite like getting it right at the World Championships. Jennifer Abel and Melissa Citrini Beaulieu of 🇨🇦 certainly succeeded, in the Women’s 3m Synchro, where they took a silver behind China and ahead of Mexico. #Diving #FINAGwangju2019 @DivingCanada pic.twitter.com/4lFq42KnOW

Team Canada’s diving duo Jennifer Abel and Mélissa Citrini-Beaulieu have locked in their spot for Tokyo 2020 in the women’s 3m synchro event.

Their performance on Monday at the FINA World Championships landed them the silver with 342 points.

This podium finish also secured Abel the national record for most medals won by a Canadian at the World Championships.

⭐️: this is her second medal in under two weeks😍 pic.twitter.com/b2GUyKJuyK

On Saturday, Kelita Zupancic defeated Maria Portela of Brazil for the -70kg bronze during the Budapest Grand Prix.

Zupancic, currently ranked 13th in the world, was seen as the underdog in the matchup versus Portela, who is ranked sixth.

Wrestling had a strong weekend taking home one gold, one silver and one bronze at the Yasar Dogu tournament in Turkey.

After defeating the second and third world ranks to qualify for the final, Olympic champion Erica Wiebe yet again did not disappoint and claimed the top of the podium in the 76 kg category. Wiebe won 2-1 against Brazilian Aline Da Silva Ferreira.

Danielle Lappage captured silver after battling against Maryia Mamashuk of Belarus in the 68 kg final and Samantha Stewart won the bronze in the 55 kg.

Congrats to 🍁 champ Sean Fincham on this incredible achievement! Next on the list 👉 Defending his title at the #canmtbchamps next weekend! pic.twitter.com/tHdl9klyjO

For the first time in his career, Sean Fincham reached the podium to claim the bronze at the U23 category at the UCI Mountain Bike World Cup in Les Gets, France on Sunday.

Canada’s women showed how it’s done at the World Rowing Cup in Rotterdam, Netherlands on Sunday. The women’s doubles and women’s eight each picked up a bronze.

In women’s doubles, Andrea Proske and Gabrielle Smith battled through the challenging conditions and finished with a time of 08:03.77s.

📺: Tune in to @cbcsports coverage of the 2019 World Aquatics Championships on CBC TV now & Sunday at 1pm ET👏pic.twitter.com/FZLYKb7L1R

In a tight matchup Canada’s Eric Hedlin raced to a bronze medal in the 5km open water swim on Saturday at the World Aquatics Championship in Gwangju, South Korea.

The 26-year-old had a final time of 53:32.3s, securing his his second world championship medal in this event.

But what a run for Gaby and Julie! Onward and upward from here. pic.twitter.com/iQhsCVTMpZ

They faced the No. 3-seeded team of Barbora Strycova and Su-Wei Hsieh and unfortunately fell in straight sets 6-2, 6-4.

Despite the disappointing finish, Dabrowski became the first Canadian to reach a Grand Slam women’s doubles final in over 30 years.

On y va! Une autre course! @bravelikegabe mile tomorrow at 3:20PM EST (Friday July 12) at the Monaco Diamond League. So grateful that this season I am back in a place where I am loving racing, and what a thrill to be afforded opportunities to do so on the biggest of stages. May we all strive to emulate Gabe's strength and courage tomorrow. @cbc.sports is live streaming. You know the drill 😉 #cyathen #RoadToTheFinal #LikeaG #FamilyYoung #BraveLikeGabe #MonacoDL #nike #justdoit 📸: @cortneywhite_

On Friday, Gabriela DeBues-Stafford raced to third place and smashed the national record at the Diamond League in Monaco.

This bumped herself to 15th fastest woman in the world to run the outdoor mile.

Weekend Roundup: Records, first-time victories and Olympic qualification
Figure Skating: Keegan Messing wins bronze at Skate America
What is the difference between racquetball and squash?
Shuttlecock and balls: The fastest moving objects in sport
Adventure, culture and food: 9 things Peru is famous for
Getting vertical: The highest jumps in sport