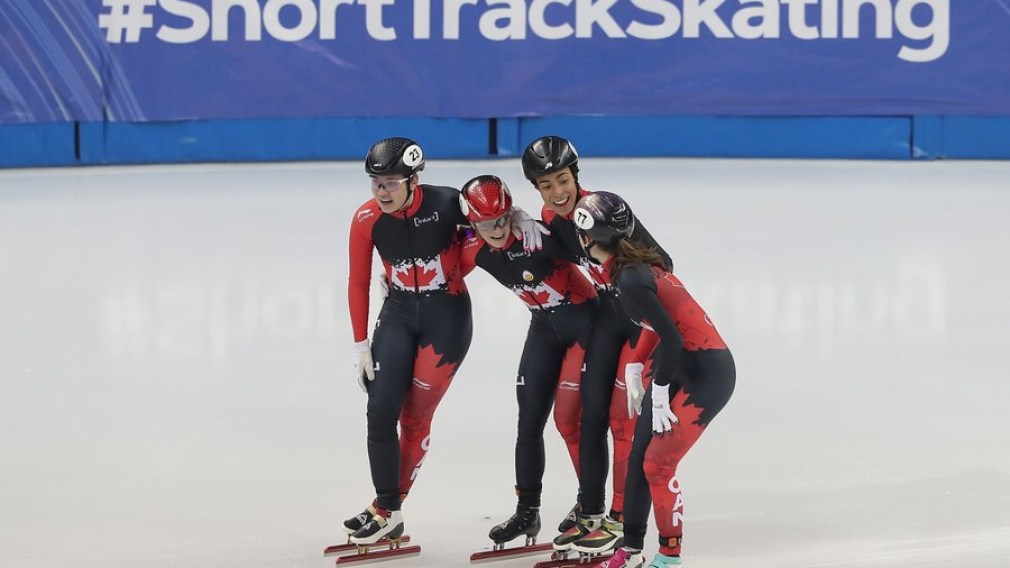 The Canadian women’s short track relay team captured the gold medal on the final day of the ISU World Cup in Shanghai.

Kim Boutin and Steven Dubois both earned individual bronze medals, reaching the podium in the 1000m and 500m respectively.

The relay team, composed of Alyson Charles, Courtney Sarault, Danaé Blais and Kim Boutin, finished with a time of 4:09.460 to win the gold medal for the first time since the 2014-15 season. It is the fourth medal of the season for the women but first gold medal victory. Previously, they have won three consecutive bronze medals before Shanghai.

The Netherlands (4:09.810) put up a tough fight, but could not overtake the Canadians, finishing with silver. The bronze went to the United States (4:13.280) after being upgraded from fourth due to a Korean disqualification.

Kim Boutin captured her first bronze medal of the season in the 1000m in a very tight finish. She has won a medal in all eight of her individual distance races this season, bringing her individual race count to six gold, one silver, and one bronze.

On the men’s side, Steven Dubois captured the bronze medal in the 500m (2) with a time of 41.289. Dubois held the lead during the third lap but a skater from Kazakhstan fell coming out of the final turn, pushing Dubois back into a podium position. This is the first career medal in the 500m for Dubois. On Saturday in Shanghai, he finished just off the podium with fourth place in the 1500m.

This marks the final day of competition in Shanghai. The Canadian team is back in action at the ISU Four Continents Short Track Championships from January 10-12 on home ice in Montreal. The next World Cup will take place February 7-9 in Dresden, Germany.