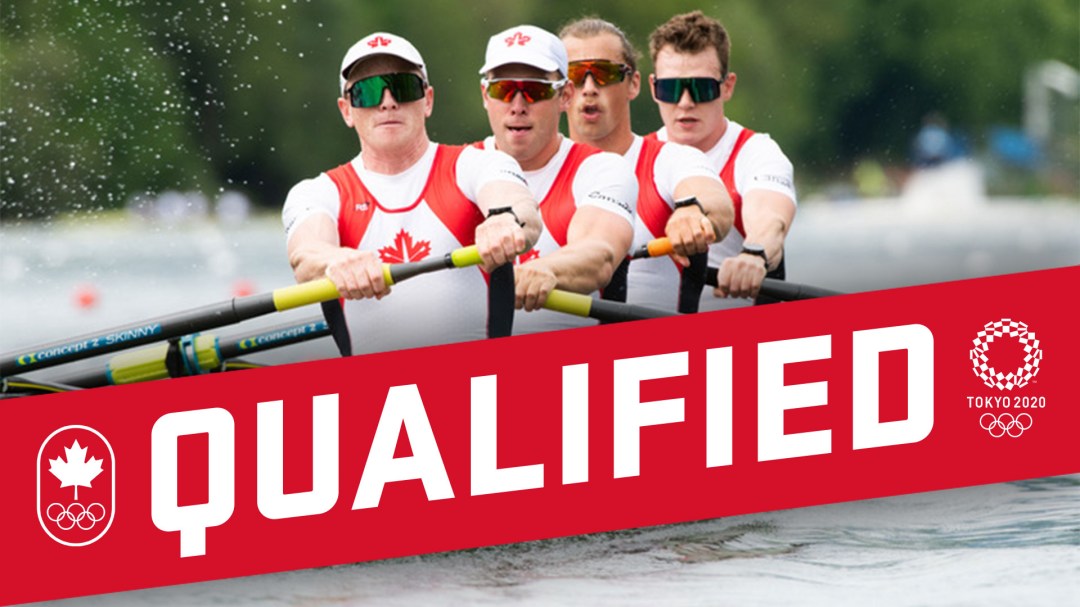 With flat waters and cloudy skies, Canadian rowers finished the weekend of racing on Lake Rotsee in Lucerne, Switzerland by qualifying boats in men’s single sculls, men’s lightweight double sculls and men’s four. At the last-chance rowing qualifying event, rowers were faced with an intense race schedule at the 2000m course due to incoming inclement weather.

Final races were moved forward from Monday May 17 to Sunday May 16. The finals got underway just moments after the semifinals concluded. As top athletes, Canadian rowers overcame this challenge, showcasing a spectacular performance during both the semifinals and finals.

The first Canadian boat to secure a quota spot was in the men’s four (M4-) after an exciting final race by Olympic silver medallist Will Crothers (stroke), Gavin Stone, Luke Gadsdon and Jakub Buczek. South Africa took the early lead, with Canada and France trailing closely behind. Canada decided to rate 40 strokes a minute down the entire course with hopes of catching the South Africans. The race was decided in the third quarter when the Canadian rowers did not let up, while France lost some momentum that they were unable to regain. South Africa (06:06.11) and Canada (06:07.84) finished first and second respectively to secure the two qualification places in the men’s four event.

“Our heat gave us a good idea where we were, lots of nerves, lots of adrenaline. We’ve done lots of race series back home against the women’s eight, which was good preparation for us.” Luke Gadsdon told World Rowing.

In the men’s single sculls (M1x) final, Canada’s Trevor Jones achieved the same result, finishing second with a time of 7:01.48 to secure another entry for Canada. Off the start, it was Russia’s Alexander Vyazovkin who took the lead. Closely behind was Poland’s Natan Wegrezycki-Szymcyk, followed by Jones. The middle of the race would decide the places as Vyazovkin secured his lead, leaving Jones and Wegrzycki-Szymczyk to battle it out for the second position. Nearing the finish, Jones looked strong as he raced to a slight advantage. Sitting tall and grabbing more water with each stroke, Jones crossed the finish line in second position to secure a quota spot for Canada.

“It was interesting having only two hours between the semi and the final. Yesterday’s heat was good to get the jitters out. I’ve put in lots of miles this winter, and I’m really relying on that” said Jones following his race.

With two crews already qualified, all eyes were on the final Canadian boat of Max Lattimer and Patrick Keane. The pair finished the men’s lightweight double sculls final in top spot with a time of 6:28.53. Despite the incoming rain, the Canadian duo was successful in overpowering the Chinese rowers who got off to a quick start. Both the Canadians and Czech Republic putt down their move through the middle of the race, but Canada was able to cross the finish line first, followed by the Czech Republic than China.

“At the beginning, we were a good chunk back, but we were just confident in our training and execution: In lightweight rowing, the leader of the race changes a lot but the fastest boats will always come out on top. What a thrill!” said Lattimer.

Prior to being named to Team Canada, all nominations are subject to approval by the COC’s Team Selection Committee following its receipt of nominations by all National Sport Organizations.