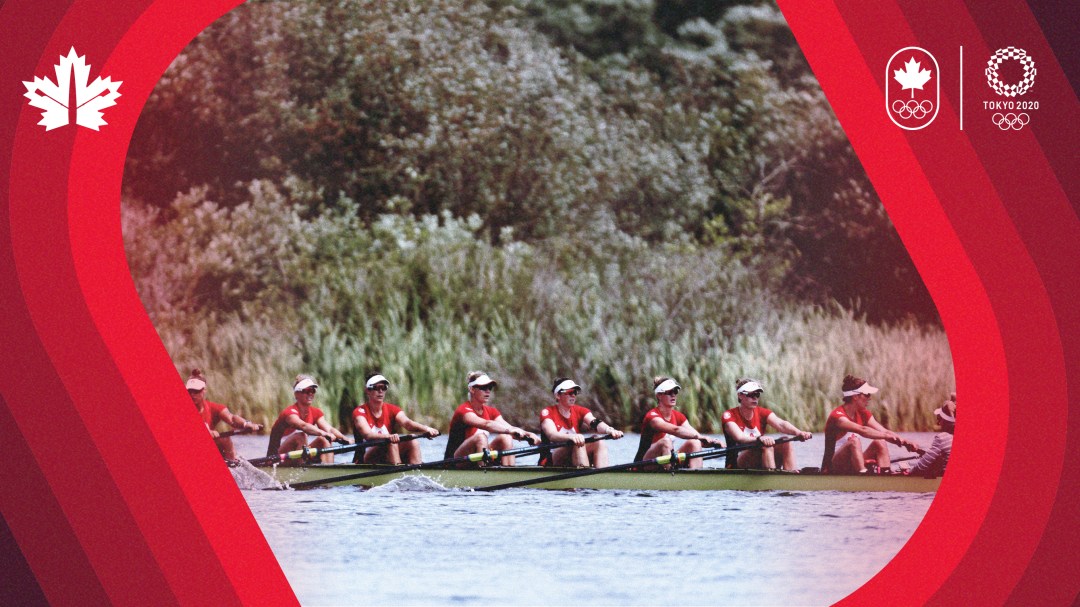 The Olympic rowing regatta at Tokyo 2020 will include 29 Canadians in 10 boats.

Seven of those boats qualified on the strength of results at the 2019 World Rowing Championships with three more attaining their tickets at the Final Olympic Qualification Regatta in Lucerne, Switzerland in May. Since then, the rowers have been undergoing assessment at their training centre in Victoria with the goal of selecting the strongest crews possible.

Canada will be entered in six of the seven women’s rowing events, accounting for 20 of the team members.

The largest crew is the eight, which will be coxed by Kristen Kit. She’ll be directing Susanne Grainger, Kasia Gruchalla-Wesierski, Madison Mailey, Sydney Payne, Andrea Proske, Lisa Roman, Christine Roper and Avalon Wasteneys down the 2000-metre course, in hopes of putting Canada back on the Olympic podium.

Six of those women (Grainger, Gruchalla-Wesierski, Kit, Roman, Roper, Wasteneys) were part of Canada’s fourth-place finish at the 2019 Worlds while Grainger, Payne, Roman, Roper and Kit all won silver at the 2018 Worlds.

Consistently a podium contender in the big boat, Canada has four Olympic medals in the women’s eight, the last being the silver from London 2012. The returning Olympians in the boat are Grainger, Roman and Roper, who finished fifth in the eight at Rio 2016.

Kit’s nomination will make her just the second Canadian summer athlete to compete at both the Olympic and Paralympic Games. In 2016, she was the cox of the PR3 mixed coxed four that won bronze for Canada’s first ever Paralympic medal in rowing.

It’s been the women’s pair that has produced the most world championship success for Canada in recent years. In 2018, their first season competing together, Caileigh Filmer and Hillary Janssens were crowned world champions after winning gold and silver on the World Cup circuit. They added a bronze medal at the 2019 Worlds. Filmer made her Olympic debut in the eight at Rio 2016 while Janssens was an alternate for those Games.

Carling Zeeman will be on the single sculls start line for the second straight Games. Twice a medallist at the U23 World Championships, she has reached the six-boat A final at the world championships in three of four attempts and has earned multiple World Cup medals.

The women’s coxless four is back on the Olympic program after having been included only once previously – at Barcelona 1992 where Canada won the gold medal. In the boat in Tokyo will be Stephanie Grauer, Nicole Hare, Jennifer Martins and Kristina Walker. Hare and Martins competed together in the pair at Rio 2016, so it will be a boat of mixed experience with Olympic first timers Grauer and Walker.

In the women’s double sculls, Gabrielle Smith will be joined by Jessica Sevick. Smith qualified the boat for Tokyo when she and Andrea Proske finished fourth in the event at the 2019 Worlds, missing the podium by just six-tenths of a second. Sevick’s international experience is highlighted by her gold medal in the single sculls at the 2019 Pan Am Games in Lima.

Getting the nod in the lightweight double sculls are Jill Moffatt and Jennifer Casson. They first joined forces in 2018 and were B finalists at the 2019 Worlds.

The veteran crew on the men’s side will be Conlin McCabe and Kai Langerfeld, who will compete in the pair. McCabe won silver in the eight in his Olympic debut at London 2012. He and Langerfeld were both in the four that made the A final at Rio 2016. They first teamed up in the pair in 2019 and won bronze in their only World Cup race before finishing eighth at the world championships.

Another member of that four in Rio was Will Crothers, who will be back in that boat at Tokyo 2020. Like McCabe, Crothers was part of the silver-winning eight at London 2012. He’ll be joined by three Olympic rookies: Jakub Buczek, Gavin Stone, and Luke Gadsdon.

Maxwell Lattimer is back for his second straight Olympic Games. After making his debut at Rio 2016 in the lightweight four, he’ll be in the lightweight double sculls with Patrick Keane. Racing partners since 2018, they’ve had fourth-place finishes at three World Cups.

Canada will have its first Olympic male single sculler since Sydney 2000. Trevor Jones was twice a U23 World Champion in 2017 and 2018 before undergoing surgery for compartment syndrome in his arm. After recovery, he made his senior worlds debut in the doubles sculls in 2019 but then switched back into the single for the final qualification regatta.

The 10 boats are the most Canada has qualified for an Olympic rowing regatta since Atlanta 1996 when the country also sent 10 crews who came home with six medals.

Rowing at Tokyo 2020 will take place at Sea Forest Waterway, a newly built venue in the Tokyo Bay Zone. The regatta will be held in the first week of the Games, with heats in several events getting underway on July 23, the day of the Opening Ceremony. The finals for the 14 events will take place over four days, from July 27 to 30. These are the first Olympic Games at which the rowing program is completely gender equal, with the same seven events for men and women.