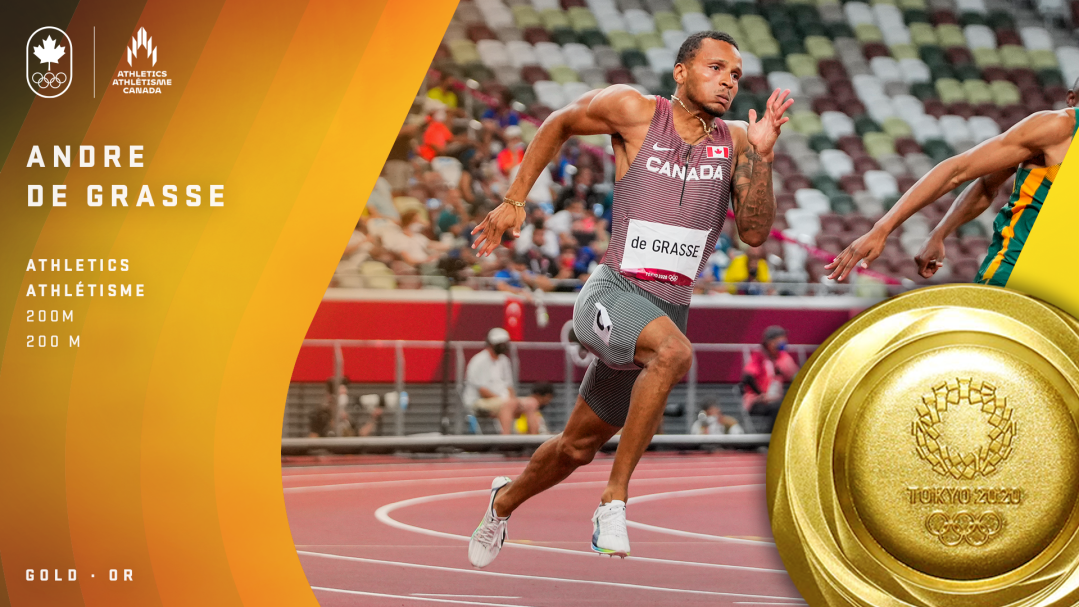 It is his second medal of these Games and his second straight Olympic medal in the 200m, following a silver at Rio 2016. De Grasse ups his career medal total to five, tying him with Phil Edwards for the most Olympic medals won by a Canadian in athletics. De Grasse has never missed an Olympic podium yet in the five events he has raced.

De Grasse just edged out American Kenneth Bednarek to the line, beating him by 0.06 of a second. Another American, Noah Lyles, took the bronze in 19.74 seconds.

This was the first time since Percy Williams won gold and John Fitzpatrick finished fifth at Amsterdam 1928 that Canada has qualified two men for the Olympic 200m final. De Grasse had lowered the Canadian record to 19.73 seconds while winning his semifinal heat. Aaron Brown, who finished sixth in the final, had also won his semifinal heat in a season’s best 19.99 seconds.

That put them in the middle of the track for the final — Brown in lane 4 and De Grasse in lane 6. As they came out of the bend, De Grasse held a slight lead, but Bednarek and Lyles were right there with him. De Grasse was able to keep them at bay as he crossed the finish in first place.

De Grasse noted that prior to the race, he knew the Americans would push him and his coach reminded him of what he needed to do: “Gotta go hard on the bend. Stay with Kenny (Bednarek) on the turn, once you get off that turn, just relax and flow.”