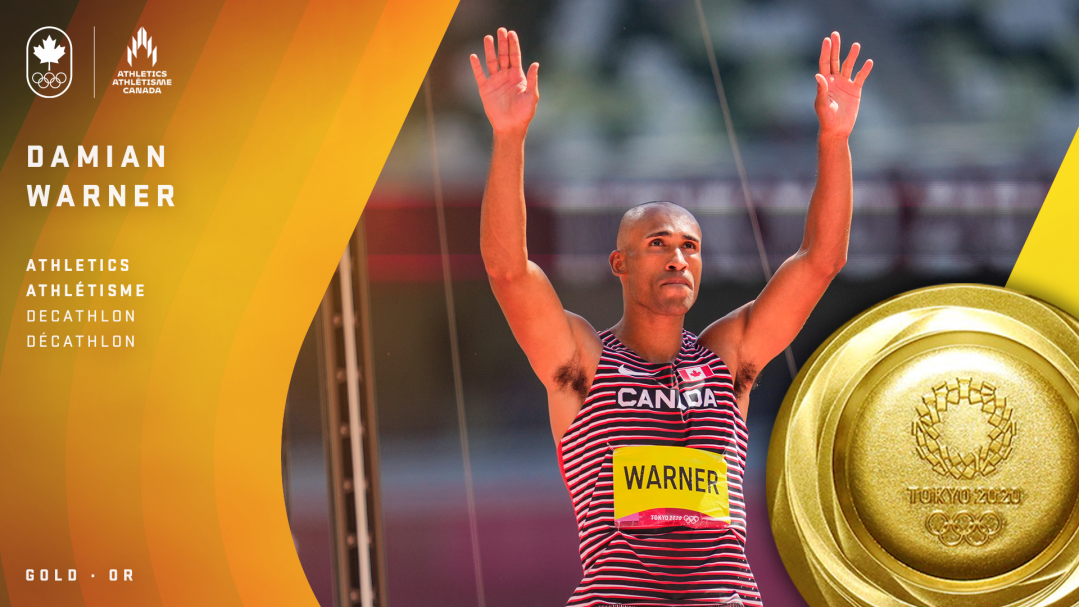 Damian Warner is Canada’s first ever Olympic champion in the decathlon, earning the unofficial title of World’s Greatest Athlete.

His final score of 9018 points is an Olympic record and a Canadian record. This is the first time Warner has surpassed the 9000-point mark, becoming just the fourth decathlete in history to do so. It is also the first time the Olympic decathlon gold medallist has broken through 9000 points as Warner breaks the previous mark of 8893 points set by American Ashton Eaton at Rio 2016.

Warner is the first Canadian decathlete to win multiple Olympic medals, as he adds to the bronze he won at Rio 2016. The only other Canadian to win an Olympic medal in the decathlon is Dave Steen, who captured bronze at Seoul 1988.

Warner had an outstanding competition, which began on Day 12 with one of his strongest events, the 100m. He matched his own world decathlon best time in the event, running it in 10.12 seconds. He followed that up immediately with an Olympic decathlon best 8.24m in the long jump, coming just four centimetres shy of his own world best distance that he set in late May at the famed Hypomeeting in Götzis, Austria. It was there that he set the Canadian record for total points at 8995, making him the fourth-highest scoring decathlete all time.

Warner also put up a strong effort in the shot put, throwing a season’s best 14.80m. That was followed by a 2.02m clearance in the high jump. He closed out day one by running a season’s best 47.48 seconds in the 400m. After leading all day, Warner held onto the yellow bib overnight with a total of 4722 points.

He started day two in much the same fashion, running an Olympic decathlon best time of 13.46 seconds in the 110m hurdles. That was just a tenth of a second off the world best time he’d run in Götzis. He launched the discus 48.67m and then achieved a personal best in the pole vault, clearing the bar at 4.90m.

As they took the midday break, Warner had 7490 points and a 221-point margin over second place at that point, Australian Ashley Moloney. Below Warner, things started to change up with the javelin, as Rio 2016 silver medallist Kevin Mayer of France threw a whopping 73.09m for a personal best, moving him up from fourth place to sit behind Warner in second. The biggest drop among the leaders came from Warner’s teammate Pierce LePage, who had been steadily in third throughout most of the competition. But in the javelin, his best effort was only 57.24m, which caused him to fall to fifth place overall.

Warner’s best throw in the javelin was measured at 63.44m, a season’s best by close to four metres. That meant that heading into the last of the 10 events, the 1500m, Warner had accumulated 8280 points and held a 214-point lead over Mayer.

In that last race, Warner settled into the pack early, before deciding to make his move on the last lap, knowing exactly the time he needed to hit to break that 9000-point mark he has sought for so long. His time of 4:31.08 equaled 738 points, putting him over the barrier.

Mayer finished with 8726 points to win silver while Moloney hung on for bronze with 8649 points. LePage finished fifth, a very impressive Olympic debut, as he earned a new personal best of 8604 points.