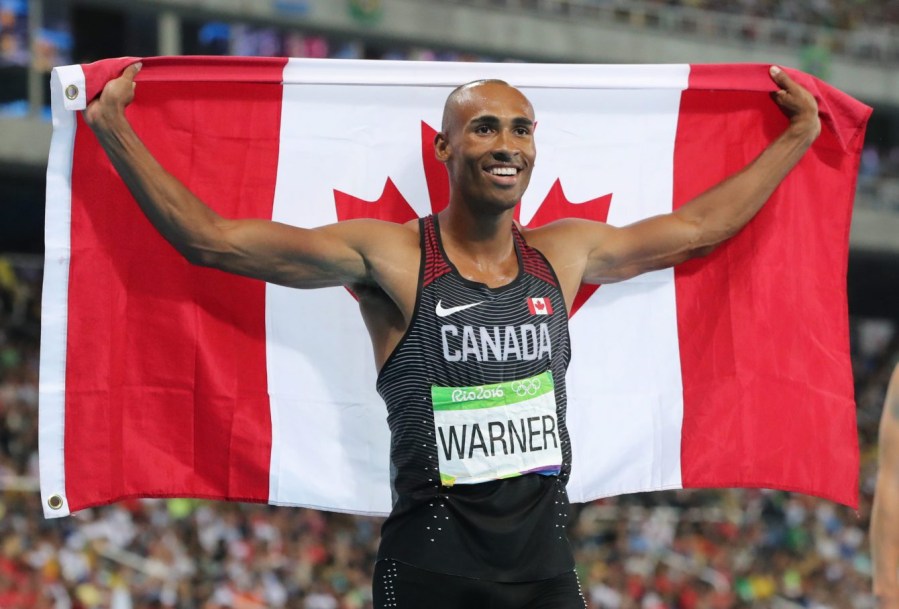 Damian Warner won decathlon gold at Tokyo 2020, setting an Olympic record as he became just the fourth man to ever break the 9000-point mark. Warner led the Olympic decathlon from start to finish as he completed the two-day, 10-discipline event with 9018 points to become the first Canadian to earn the honourary title of World’s Greatest Athlete.

Warner had won bronze at Rio 2016 for Canada’s first Olympic medal in the decathlon since Dave Steen’s bronze at Seoul 1988. That had followed a sensational summer in 2015, which began with a gold medal at the Pan American Games in Toronto where he broke the national decathlon record that had stood since 1996 with his score of 8659 points. Just a month later, he improved on that national record, earning 8695 points to win silver at the World Athletics Championships behind only a world record performance by American Ashton Eaton.

Warner had surpassed all expectations when he finished fifth in his Olympic debut in the grueling two-day event at London 2012. He beat his previous personal best score by more than 300 points, posting personal best marks in six of the 10 events. He improved his personal best to 8512 points in winning bronze at the 2013 IAAF World Championships.

Warner achieved another career highlight in 2013 when he won the prestigious Hypo-Meeting in Götzis, Austria for the first time. He went on to win gold at the 2014 Commonwealth Games. Warner added a second Götzis title in 2016 when he lowered his 100m personal best to 10.15 seconds, the fastest ever recorded by a decathlete. In 2018, he won his third straight Hypo-Meeting by scoring 8795 points, once again breaking his own Canadian record.

Warner made more history in 2019 when he became just the third athlete to ever win five decathlons at Götzis, lowering the 100m world record by a decathlete to 10.12 seconds. He followed up with a second straight Pan Am Games gold medal in Lima before winning another bronze medal at the World Athletics Championships in Doha, Qatar.

After not competing a decathlon in 2020 because of the COVID-19 pandemic, Warner returned to Götzis in May 2021 and won gold for the sixth time. He scored 8995 points to break the national record once again and rank him as the fourth-highest scoring decathlete all-time. He achieved that score in part by recording world decathlon bests in the long jump (8.28m) and 110m hurdles (13.36s). He also became the Canadian record holder in the long jump.

A Little More About Damian

Getting into the Sport: Started in track and field at 17, pushed by his high school basketball coaches… Had his Olympic dream sparked by watching Catriona Le May Doan and Donovan Bailey compete when he was a kid… Outside Interests: Graduated from Fanshawe College in 2010… Enjoys art and drawing, playing video games, travelling… Odds and Ends: Favourite motto: “You can do anything you set your mind to”… Role model is Vince Carter, who he watched as a kid and inspired him to pursue professional sports… Has collected a stuffed animal from every big competition he has participated in…