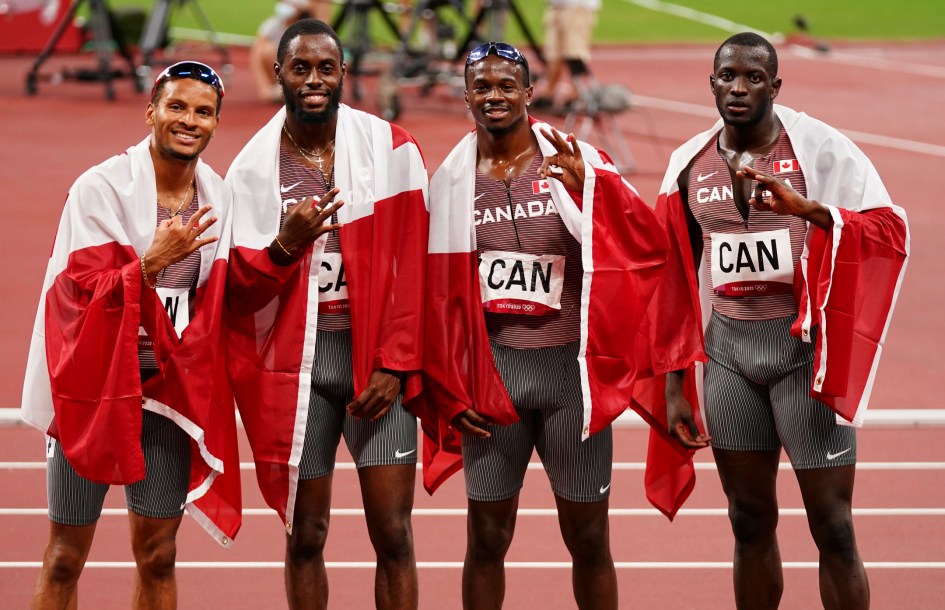 In their final race at the Tokyo 2020 Olympic Stadium, the men’s 4x100m relay team made it count. They will stand on the podium once more as the Olympic bronze medallists.

As Aaron Brown, Jerome Blake, Brendon Rodney, and Andre De Grasse raised their flags in celebration, the reigning bronze medallists from Rio 2016 were happy to stand on the podium again but also vow to be back and better at Paris 2024.

“We came out with an Olympic medal, second consecutively at the Olympics,” said Brown. “We’re proud of that achievement and this group of guys will be back. We’ll get faster and stronger and improve from this.”

Going with the same team and positions as in their qualifying heat — Brown, Blake, Rodney, to De Grasse — the Canadians edged out China at the line to finish with a season best time of 37.70 seconds.

Coming into the final with the third fastest time in qualifying, the team knew they needed to bring everything to this final race.

“The race went by really quick,” said Blake, who is competing at his first Olympic Games. “I feel like there’s little things that I could do to put us in a better position, but at the end of the day, to come in here and leave with an Olympic medal, we’re pretty happy about it.”

Taking nothing for granted, they’re proud of this moment. Paris will look to be Brown’s fourth Games, De Grasse’s and Rodney’s third and Blake’s second Olympic appearance. They hope this team will be back together and better than ever before.

“We’ll be back and I feel like we’ll be an even better team,” De Grasse added. “I feel like we can bite the national record. We have three other fast guys here. I think our team was actually better than it was in 2016, so we’ll continue to get better.”