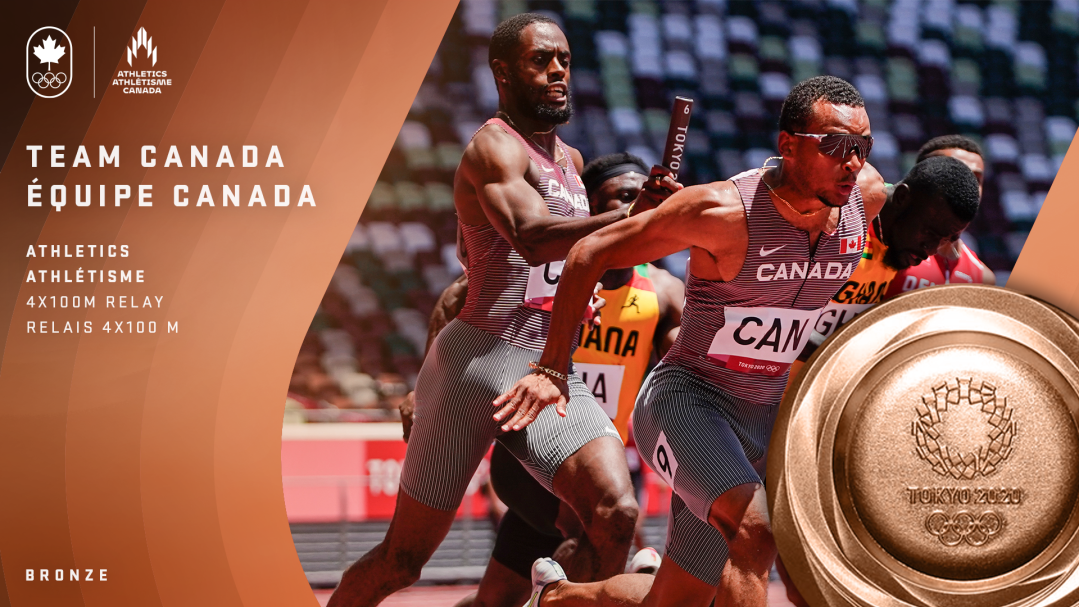 UPDATE: On May 19, 2022, the IOC confirmed that Canada would be upgraded to the silver medal following the disqualification of Great Britain for an anti-doping violation.

It is Canada’s fourth Olympic medal all-time in the event and comes 25 years after the gold medal won at Atlanta 1996.

The lineup for the final had Aaron Brown leading off, followed by Jerome Blake and Brendon Rodney, who made the final handoff to anchor runner Andre De Grasse. That same quartet had raced in the heats, where their time of 37.92 seconds ranked them third heading into the final. They had done that after Brown and De Grasse had gotten only about three hours of sleep following the 200m final where De Grasse won gold and Brown finished sixth.

For the final, the Canadians were in lane 4. They had clean handoffs throughout the race, but when the baton got to De Grasse, he had some ground to make up, trailing behind Great Britain, Italy, China and Jamaica. But he turned on that trademark speed to get past China and Jamaica, coming in for the bronze in 37.70 seconds. Italy won the gold in 37.50, beating out Great Britain by 0.01 of a second.

De Grasse, Brown and Rodney were all members of the bronze medal-winning team five years ago at Rio 2016, where they broke the national record set by the 1996 Olympic champion squad of Donovan Bailey, Bruny Surin, Glenroy Gilbert and Robert Esmie. There was also a bronze medal won at Los Angeles 1984.

The medal is De Grasse’s third of Tokyo 2020 and the sixth of his career, ranking him second all-time among Canadian summer Olympians, behind only swimmer Penny Oleksiak who upped her career total to seven here in Tokyo. De Grasse has never missed the podium in any of his Olympic events.