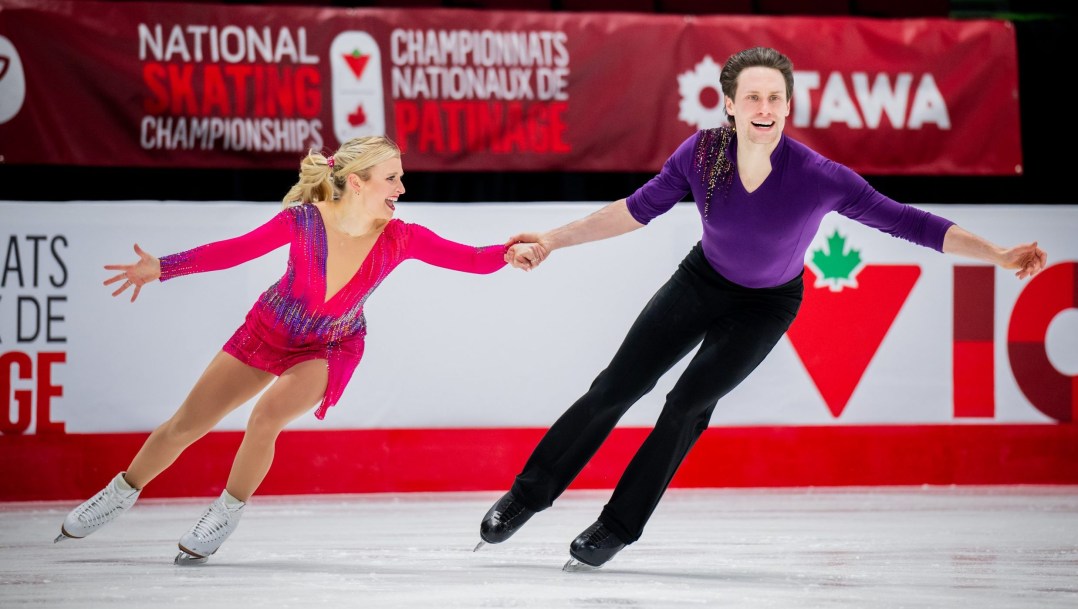 The nationals are the final competition to be considered in the selection of the Canadian Olympic figure skating team, which will be announced on Sunday, following the free skates on Saturday. Results at nationals are not the sole determining factor in Olympic team selection, as Skate Canada’s high performance committee will also take into account results at international competitions over the last year.

Here is a quick recap at what happened in the short programs:

Reigning world bronze medallists Piper Gilles and Paul Poirier scored 86.98 points to take the lead in the rhythm dance. The only blip in their technical mark was a level three on the required Midnight Blues pattern. Otherwise, they hit the top level four on all of their other elements and received strong components marks, including two individual perfect 10s.

Gilles and Poirier are looking to win their second straight national title before they head off to their second Olympic Games together. They won two Grand Prix medals this fall and qualified for the Grand Prix Final, which was unfortunately cancelled in December because of the most recent wave of the COVID-19 pandemic.

“First and foremost we’re really treating this competition as a training opportunity for the Olympic Games. That’s where we really want to be peaking,” Poirier said in the virtual mixed zone. “We’re just excited to be back on a competitive stage, performing these programs and I think we’re just really trying to be present in the performances.”

Sitting in second are Laurence Fournier Beaudry and Nikolaj Soerensen with 81.04 points. Eighth at the 2021 World Championships, the duo are looking to compete at their first Olympic Games after missing the opportunity in 2018. At that time, they represented Soerensen’s native Denmark internationally, but Fournier Beaudry could not attain the Danish citizenship needed to be Olympic eligible. In 2018, they decided to compete for Canada and Soerensen — who has lived in Montreal for a decade — received his Canadian citizenship late last summer.

In third place are their training mates from the Ice Academy of Montreal, Marjorie Lajoie and Zachary Lagha, who scored 76.67 points. The 2019 World Junior Champions made their world championship debut this past March.

Keegan Messing overcame a travel odyssey and lost luggage to sit in first place after the men’s short program. It wasn’t his best performance, as he popped his planned triple Axel into a single, but on this night, it was enough.

Messing had spent 33 hours in transit to get from his home base in Alaska to Ottawa via three flights. Arriving later than planned and with his suitcase stuck in Toronto, he was without his own skates until Friday. On Thursday, he had sourced a new pair and attempted to quickly break them. But he didn’t end up having to compete in them after his luggage was recovered.

Messing opened with a beautiful quad toe-triple toe combo and also landed a triple Lutz to help him earn 84.38 points. That put him just under three points ahead of Wesley Chiu, in second place with 81.47 points. Still just 16, Chiu competed on the Junior Grand Prix circuit this past fall, earning one gold and one bronze, before entering his first senior international event in November. His only mistake was a step out on the landing of his triple Axel .

Joseph Phan is in third place with 78.14, following close behind by Roman Sadovsky with 77.17 points.

Canada has two men’s spots for Beijing 2022. Messing’s sixth-place finish at the 2021 World Championships locked up one of those and made Canada eligible to go after a second quota spot, which Sadovsky secured for the country at Nebelhorn Trophy in September.

After a disappointing first half of the season, Kirsten Moore-Towers and Michael Marinaro showed exactly what they’re capable of in the pairs short program. The two-time national champions looked solid in the execution of their technical elements as they totalled 73.02 points to sit in first place. They have more than a six-point lead on the current second-place team, Evelyn Walsh and Trennt Michaud.

Moore-Towers and Marinaro received positive grades of execution on all elements except for their opening triple twist. They landed their side by side triple toes as well as the throw triple loop. They also received the highest components scores in the field. They’re looking to compete at their second straight Olympic Games together.

Walsh and Michaud, who finished 12th at the last two world championships in 2019 and 2021, also put out their best performance of the season to score 66.88 points. They only had slight issues on one element, the side by side triple toes. They’ve been the runners-up at the last two national championships and would love to make their Olympic debuts in a few weeks.

Just over three points behind them are two teams separated by just two-tenths of a point. Deanna Stellato and Maxime Deschamps (63.54) hold onto third place over Vanessa James and Eric Radford (63.33).

James and Radford made headlines in April when they announced they were coming out of retirement to form a new partnership. They were the top Canadian couple on the Grand Prix series this fall with two fourth-place finishes, but were still working through some of the difficulties that come with being a new pair. They, as well as Stellato and Deschamps, are competing at nationals on just four days of training after being off for two weeks following positive tests for COVID-19 in late December. In their short program at nationals, James fell on her triple Salchow and they had troubles with their triple twist, an element that depends on good timing.

Canada has two pairs spots for Beijing 2022. Stellato and Deschamps will not be under consideration for the Olympic team as she is American-born and has not yet received Canadian citizenship.

Madeline Schizas was the star of the women’s short programs and will take a 12.70 point lead into Saturday’s free skate.

Schizas’ clean performance included a triple Lutz-triple toe combo and a solo triple loop as well as the required double Axel. The 18-year-old earned level four on all three of her spins as well as her step sequence as she scored 72.05 points.

Sitting in second with 59.35 points is Veronik Mallet, who is just ahead of two-time Olympian Gabrielle Daleman and her 58.48 points. Daleman, who was part of Canada’s team gold medal at PyeongChang 2018, doubled the planned triple toe on the back end of her combo and fell on the triple Lutz.

Schizas has been Canada’s most consistent women’s singles skater in 2021. In her world championships debut in March — which was also her first major senior international competition — she finished ninth in the short program and 13th overall to earn Canada a women’s quota spot for Beijing 2022. This fall, she entered her first Grand Prix events, the highlight of which was her sixth place finish at Rostelecom Cup, where she placed fourth in the short program.

“The Olympics were not even on my radar until after the world championships last year,” said Schizas, who has been enjoying quite the rise since her bronze at the 2020 Canadian Championships. “When I qualified Canada a spot at the Games, that’s when I said to myself, ‘You know, I could do this. I could qualify.'”

Canada has just one women’s spot available for Beijing 2022.