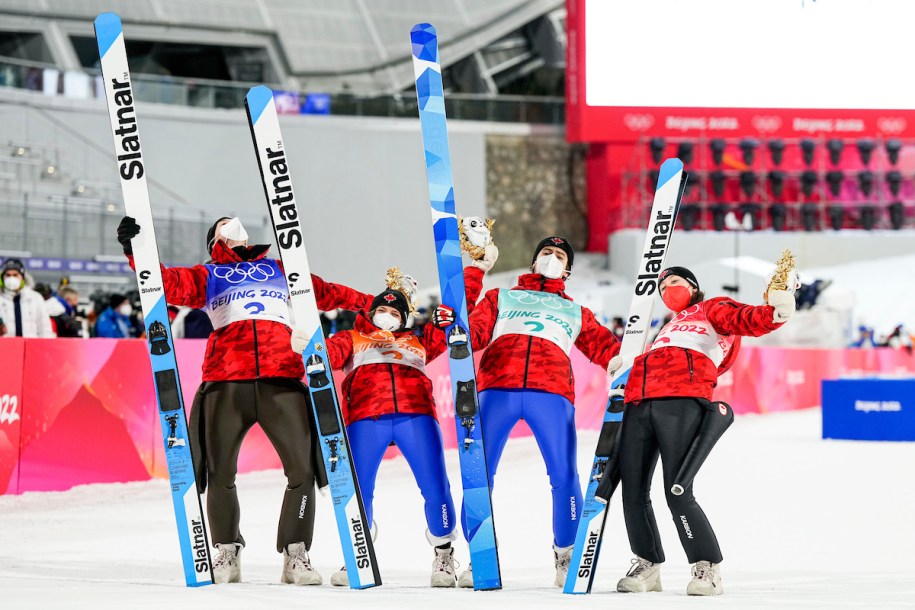 The Canadian ski jumping team is on cloud nine after winning a surprising bronze medal in the mixed team event at Beijing 2022.

“I’m still processing it. It doesn’t feel real yet!”

Alexandria Loutitt simply cannot believe it, and neither can the rest of the world. She and her three teammates, veteran Mackenzie Boyd-Clowes, along with Matthew Soukoup and Abigail Strate made Canadian sport history by winning the country’s first Olympic medal in ski jumping.

While it was a first Olympic experience for Loutitt, Soukoup and Strate — which makes this story even more magical — it was not Boyd-Clowes’ first rodeo who, at the age of 30, is competing in his fourth consecutive Games.

It was just a day earlier that he recorded his personal best finish at the Olympics, finishing 16th in the men’s individual normal hill event. That had been Canada’s best Olympic result in a men’s individual ski jumping event since Calgary 1988.

Suffice to say, Boyd-Clowes was not expecting to add “Olympic medallist” to his resume today. “Honestly, I believed in myself enough to continue to ski, but winning a medal was not the goal.”

He also took the time to highlight his teammates and their hard work.

“I’ve got my teammates to thank. We just all did our job and stuck together, and we’re stoked,” said Boyd-Clowes. “It’s the best possible outcome. The girls are amazing, my teammates are amazing. They all work so hard and inspire me to be at my best. We have all done the work and it’s just incredible.”

As thrilling as winning an Olympic medal is, the quartet are also hoping it has a positive long-term impact on the sport in Canada.

Since the closure of the ski jumping facilities that were used for the 1988 Olympic Winter Games in Calgary, the team has been based in Slovenia, keeping them away from home for most of the year as they competed and trained for just a moment as they celebrated on Monday night in Beijing.

“It gives us a chance to save our sport,” said Loutitt of the medal and the exposure it will bring to ski jumping in Canada. “Abi (Strate) and I have been living away from home since we were about 13. It shows that even though our sport was struggling and there wasn’t a lot left there, we still pursued our passion and our love carried through.”

“I didn’t think a medal was possible, so it really meant everything to me. I’ve been doing the sport for 23 years and I haven’t seen ski jumping in Canada get a boost yet, so I’m hoping this might do something,” confided Boyd-Clowes.

So, given all the adversity they have faced, to what do the ski jumpers attribute their breakthrough in Beijing?

“I think it’s honestly the way we work together and how much we love each other,” said Loutitt. “We don’t have any jumps at home, so we live 8,000 kilometres away from home together. And so that gives us the ability to work so well and be so happy for each other.”

The 18-year-old, who until this year had her eyes more so on competing at Milano-Cortina 2026, knows the power that the visibility of success on the Olympic stage can bring.

“I was personally inspired by watching the Olympics and I can only imagine how inspiring it can be to watch someone win a medal.”