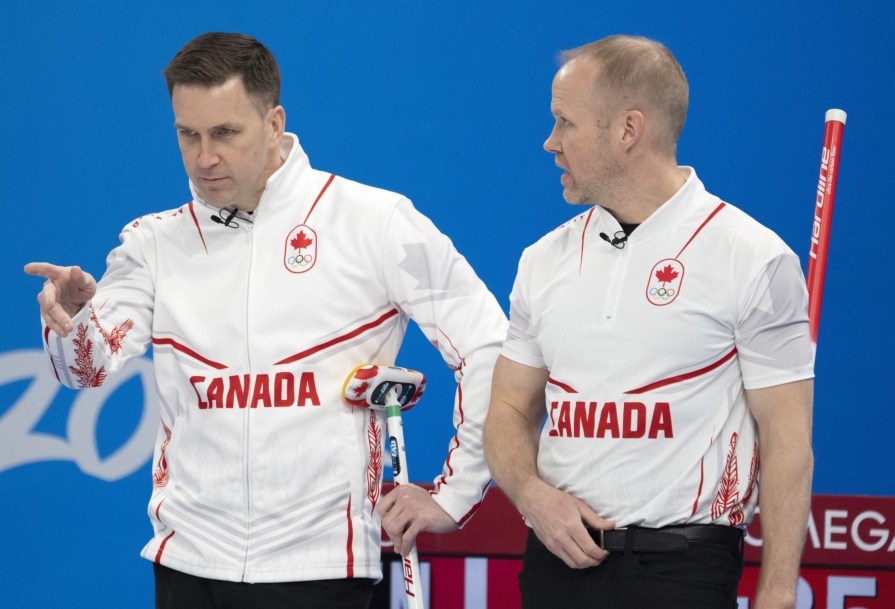 Lifelong friends back for another shot at Olympic glory

Mark Nichols has known Brad Gushue since they were teenagers. They’ve curled together for most of the last 24 years. They’re business partners and life-long friends.

And there’s no one Nichols would rather be doing it with than Gushue.

“I can’t imagine being at the Games without him,” the 42-year-old Nichols said after the team opened its 2022 Olympic Winter Games with a 10-5 win over Denmark. “He’s one of the best curlers in the world and we’ve had a great friendship over the past 20 years.”

The two first curled together in 1998-99, going to three Canadian junior championships before winning it in 2001. Nichols retired briefly after the 2011 Brier, returning that winter to play two seasons with Jeff Stoughton before rejoining Gushue for the 2014-15 season.

They played a ton of Briers together before finally winning one in 2017 in Gushue’s hometown of St. John’s. They won again in 2018 and 2020.

“I guess he’s very big (in my life), we’ve been through everything in our sporting career together. Big life moments, too. It’s pretty special that I get to do this with him again, 16 years after our first one,” said Nichols.

It’s been so long, although only three Winter Olympics, since they won their gold medal that Nichols, who has played third for Gushue throughout their career, admits there were times he wondered if they would ever have another chance

“At times you think you might not get back,” he said. “At times you’re starting to think well, maybe I was only going to get the one. I know in ’06 we said, ‘Treat it like it could be your only one’. Fortunately for us now it’s our second.”

And just like their first trip to the Games, they weren’t one of the favourites to win the right to represent Canada. In 2006 they were young and hadn’t won any major titles. At the Canadian Trials back in November there were some who considered them past their prime, trying to butt heads against the likes of Brendan Bottcher, Matt Dunstone and Brad Jacobs.

“The depth in Canada is so good, you’ve got to have one of the best weeks of your life just to get here,” said Nichols who is a co-owner with Gushue in an Orangetheory Fitness facility. “So for us to win the trials back in November, December last year, it shows the depth of our team.”

Obviously life and curling has changed dramatically from 2006, including the reality of playing in the midst of a pandemic that seriously restricts where the curlers can go and what they can do while in Beijing.

“I got my first cellphone given to me when we got to the Olympics in ’06 – that was the first time I ever had a cellphone,” recalls Nichols. “Twitter didn’t exist. There was none of that. So now we’re connected to all our friends and family pretty easily, which makes not having them here a heck of a lot easier.

“Obviously playing at an Olympics in a pandemic is something crazy in itself. But I feel fortunate to be playing in an Olympic Games with everything else that’s going on, pandemic-wise. So we’re just enjoying the opportunity to play against the best teams in the world.”