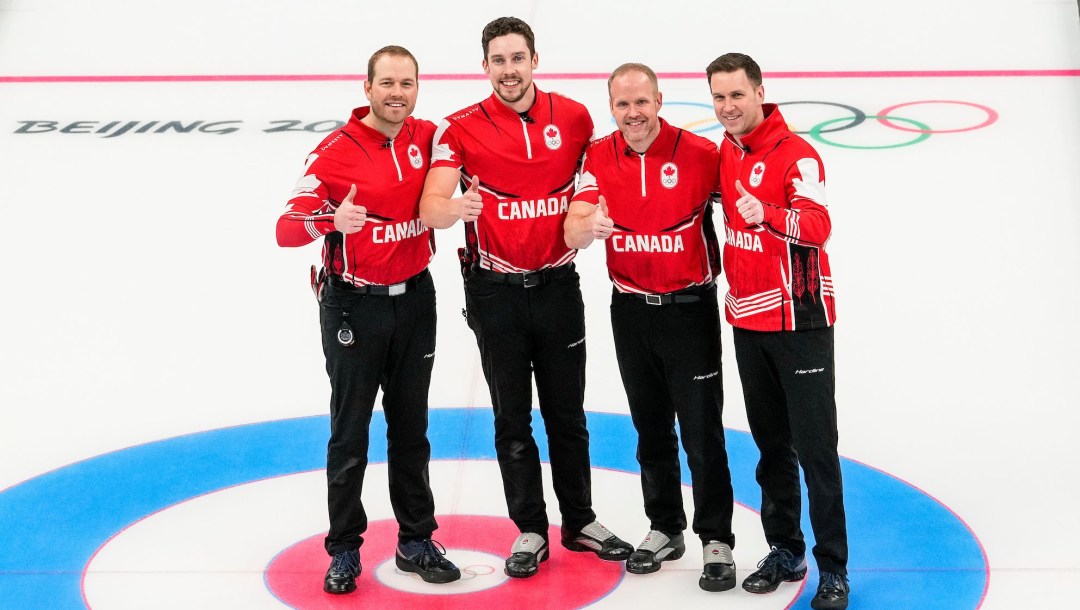 It wasn’t the colour they came to win but Brad Gushue and Team Canada will gladly take home the bronze medal in men’s curling to cap off what has been a difficult week at the 2022 Olympic Winter Games.

“It’s a real good way to end a tough week for us and to stand on the podium is going to be real special,” said Gallant, who along with Walker was making his Olympic debut.

“We came here for a gold medal, but we wanted to make sure we were on that podium for each other and for (our) families and for Canada.” added Walker. “Any time you get on the podium it’s good for Canada curling, getting people to come and try to play curling if they have not already. Curling is a big part of Canada, so being able to podium like that is very special, it’s a lot of hard work that goes into it.”

Gushue and Nichols won the gold medal in 2006 and both say the bronze will be a nice addition to their trophy case.

“Obviously it’s not the colour we wanted,” said Nichols, stating the obvious. “Every Canadian cheering us on and supporting us wanted and expected us to win gold and that’s what we wanted. But when you don’t play your best against some of the best in the world it’s really hard. Obviously we’re disappointed it’s not a gold, but it could also have been nothing.

“The bronze medal is going to look real nice next to the gold medal and there’s not many people in the world who can say they got two of them.”

Gushue said the medal is a testament to how hard the team battled this week when they knew they weren’t playing their best.

To win the bronze the foursome had to bounce back from a crushing last-end loss to Sweden in the semifinal just nine hours earlier.

“I think the key today, and last night, was working as a team and supporting each other to try to get the best out of each and every one of us,” explained Gallant, who celebrated his 32nd birthday on the day of the bronze medal match. “We knew we maybe didn’t have our best stuff and we struggled a little, but we certainly didn’t stop fighting and didn’t stop believing in one another.”

It was that belief and the Olympic experience of Gushue and Nichols that helped Team Canada shake off three sloppy ends that allowed Shuster to grab a 5-4 lead after six ends.

Canada was outplayed at every position through the first half but Gushue and his teammates totally flipped that in the final five ends, especially Nichols. He made two huge shots in the eighth and ninth ends to set Canada up to score a lead-changing two in the eighth and steal the game-clinching deuce in the ninth.

“Not once did this team quit and I’m super proud to be part of it,” said Nichols, adding he was going through “every emotion in the book.”

“There were times I never thought I would be here and the preparation leading up to this was something we had never experienced before. And then to get back here, struggle, not play at our best and just fight, and man did we ever fight hard. It could have been real easy to just say, well it’s not our week, especially after yesterday.”

Gushue, who had a couple of costly misses in the fourth and sixth ends, countered those with pivotal shots in the later ends. After Gallant made a run back double to turn the seventh Canada’s way, Gushue hit a last-stone double to blank the end and flip the hammer to Canada for the important even ends.

That paid off with Canada scoring two in the eighth to regain the lead. Gushue had a choice with last rock: try an in-out with the potential for four or a tough draw for three. He elected to draw and was inches heavy and settled for the deuce.

Nichols made a key hit and roll to the button shot in nine and Gushue was pinpoint accurate on a tap back double that that led to Shuster trying a tight tap back to score two. But he was slightly offline and left Canada with a steal of two and an 8-5 edge. Canada ran the U.S. out of stones in the tenth.

“We came here to win gold but the reality is even if we came here and played out best, the two teams that in the final are good enough to potentially beat us,” said Gushue. “So we might have still been in the same situation, go 9-0 and lose in the semi then win this game. So to get a bronze medal, with all the great teams in the world, to be one of three teams is pretty special. Hopefully curling fans understand that.”

And after 16 years away from the Olympics, having failed to win Canada’s Olympic trials three times before finally winning in November, Gushue appreciates winning this medal at age 41.

“It means just as much at this point.” he said. “The fact that I was away for 16 years, this whole experience means a lot. Even if we lost today, we’ve made the most of the experience. At 41, those are the things you remember more than at 25, when it’s all about winning. The perspective has changed dramatically.”

“Physically, mentally and emotionally, I’m as tired as I’ve been in a long, long time. This week took a lot out of us. We put a lot into it and we’re … tired.”