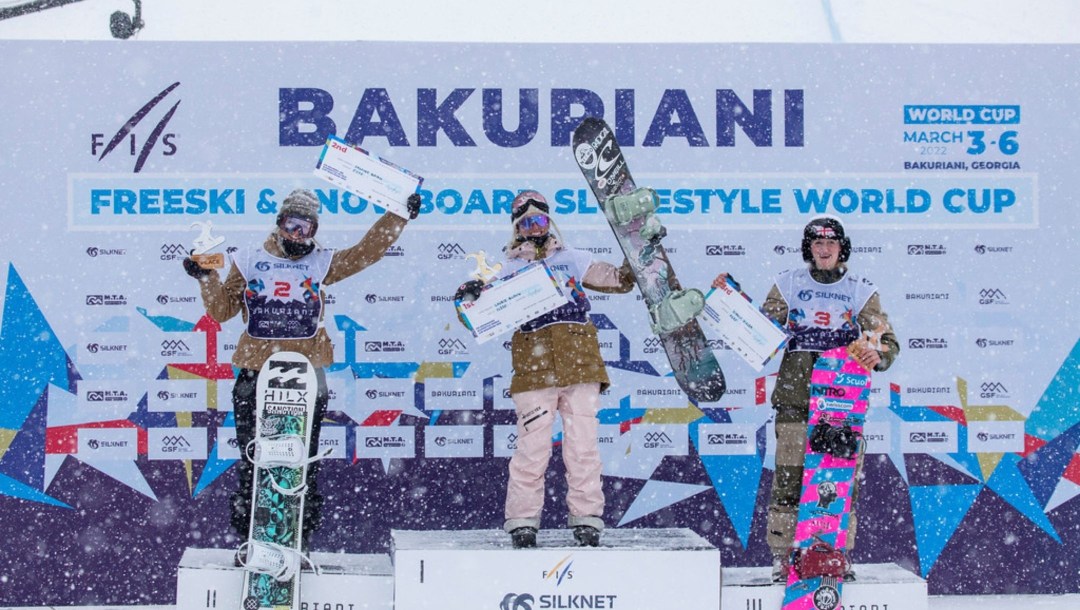 Team Canada took to the podium in numbers at Bakuriani, Georgia with Jasmine Baird winning silver and Laurie Blouin winning gold in snowboard slopestyle at the FIS World Cup.

Blouin finished with the score to beat of 76.25 with fellow Canadian Baird finishing just behind her with 70.00. Switzerland’s Bianca Gisler secured the bronze medal with a score of 67.25.

Blouin entered the event with one goal in mind: gold. During her first run, she landed a frontside 180 on to switch backside 360 before finishing with a 50-50 frontside 360. This was enough to earn her 76.25 points. Her second run would not yield any significant point boost, but none of the other competitors could surpass her.

Baird put together a similarly impressive run with her landing a cab double underflip 900. This earned her a earned her a score of 70.00 which was enough for the third World Cup podium of her career and her first slopestyle top-3 since the 2018/19 season

Both Baird and Blouin brought their A-game to Beijing 2022 and have stayed hot since. Baird found herself building momentum towards the big air event which led her to an impressive seventh-place finish. In the slopestyle event, she added a 15th place finish to round out her Olympic debut.

Blouin also put together a Games she is sure to remember as she finished just shy of the podium in the slopestyle, finishing fourth. She also went on to add an eight-place finish in the big air event.

With their World Cup medals, Biard and Blouin add to their already impressive resumes.

With her win, Blouin collects her third gold medal to accompany the one she won in the big air event in 2021 and her slopestyle gold medal from 2017. She also holds a trio of medals from the Winter X Games and a 2013 gold medal from the FIS World Junior Championships.

The next opportunity to repeat for the Canadians will be at Spindleruv Mlyn in the Czech Republic on March 18-19, 2022.

Mélanie Blouin made her Olympic Games debut in London and competed in the pole vault event, finishing in 19th place.