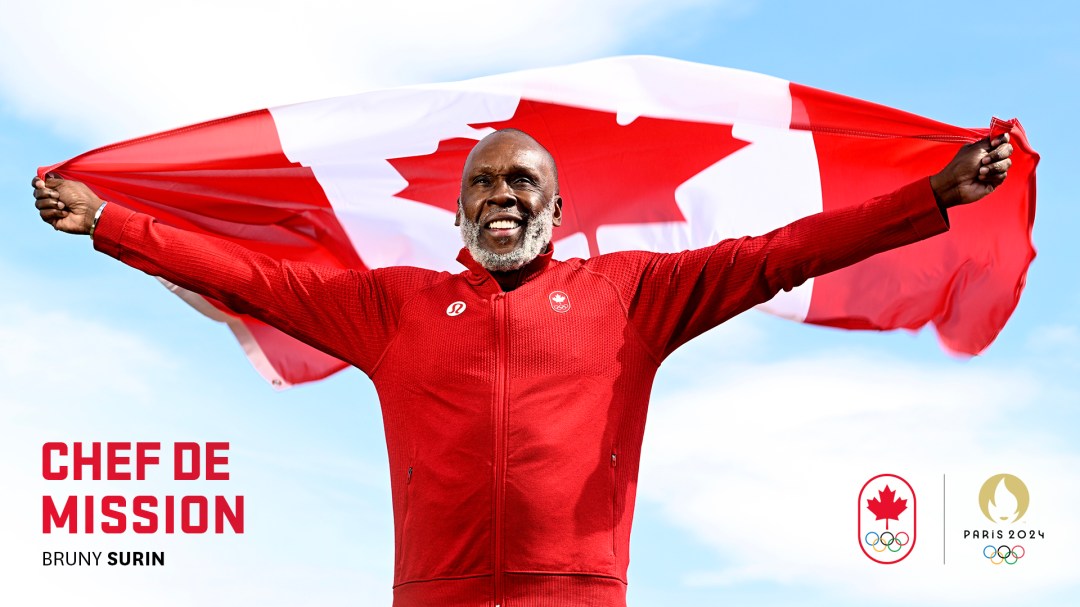 Nearly three decades after he became an Olympic champion, Bruny Surin is headed back to the Games, this time as Team Canada’s Chef de Mission for Paris 2024.

“It’s an incredible gift. I can’t wait,” Surin told Olympic.ca of being given such a prominent role with Team Canada.

“At the end of my athletic career, I knew that I wanted to stay involved in sports and serving as Chef de Mission for the Olympic Games really is another level,” added Surin, who genuinely appreciated serving in the same position for the 2018 Summer Youth Olympic Games in Buenos Aires.

Indeed, that first experience as Chef de Mission confirmed his desire to assume those duties again.

“It’s a role I’ve been considering for a long time. I’ve been thinking about it for at least 12 years. I take it very much to heart.

“At the Youth Olympic Games, I saw the ways in which being a Chef de Mission can have a positive impact on the athletes’ experience. Athletes confide in you, seek advice, or just need someone to listen,” he said.

It’s a fitting role for the charismatic Surin, who describes himself as a unifier and someone who places great importance on shared experiences. He also has a strong desire to share what he’s learned with the next generation. The wide range of experiences he had over his four Olympic Games gives him a good understanding of what athletes go through.

“At my first Games, I didn’t know what to expect and I was very nervous. In 1996, I experienced the euphoria of winning a gold medal. I also know how an athlete feels when things don’t work out performance-wise, or when they’re injured. I’ve had some great performances in my career, but also some poor ones. When an athlete comes to me after one of these situations, I know what to say and how to support them. I understand their emotions because I’ve lived that myself,” he said.

As Chef de Mission, Surin wants athletes to see him as a friend, a confidant, someone who’s been in their shoes and understands them. At the same time, he doesn’t want to impose himself on the athletes; rather he views his role as complementary to that of the coaches and specialists who are with them every day.  He wants to be one more option in the toolbox that competitors have access to before, during, and after the Games.

“I never want athletes to hesitate to contact me for advice or concerns. It doesn’t matter what sport they’re in,” he said while stressing that he wants them all to feel supported, regardless of their result.

“I’m going to spend as much time with a rookie as I do with a potential gold medalist. The team and I are there for all the athletes.”

While for some the 2024 Games may still seem far away, Surin is thrilled to be embarking on the adventure immediately. He follows the performances of Canadians in every sport with great interest and says “it’s a privilege to be part of their journey to the Games” over the next two years.

Just as he didn’t skimp on effort when he was competing, the former sprinter wants to prepare effectively to do the best job possible, which includes learning from those who have been Chef de Mission before.

“I want to learn from them, how they felt, how it went,” he said.  “I want to benefit from their experience to improve.”

Though Surin has coveted the role of Chef de Mission for over a decade, Paris 2024 seems like a natural time for it to finally be his.

“I love Paris. It has a special place in my heart. I used to compete there almost every year, so I know the city.”

Born in Cap-Haitien, Haiti, Surin grew up in Montreal. The fact that the Games are being held in a French-speaking city will enable him to interact even more with the people there and enrich the experience of Canadian athletes.

At Paris 2024, he wants to help athletes enjoy a positive Olympic experience filled with lifelong memories.

“I remember the connections I made with other Canadian athletes at the Olympics and the connections I made with athletes from other countries. Friendships will be established with people from all over the world. That’s something I like. Yes, there’s the competition aspect, but I’ve always kept things separate. I didn’t have any friends at the starting line, but once I crossed the finish line, I was a very social guy. I’m still like that,” added Surin, who has been described as a bon vivant.

Proud of his Olympic background, Surin aspires to ensure that all Team Canada athletes cherish their Olympic legacy.

“When you’re an Olympian, it’s for life, it’s tattooed on your heart,” he said. “The Olympics represents the culmination. There’s nothing bigger. It’s the pinnacle. Participating in the Games is an achievement. The medals are a bonus.”

Beyond the hardware, he believes that a high-performance athlete’s journey prepares them to excel outside of sport. That’s why he places such great importance on the sports experience.

“My Olympic background allowed me to develop work ethic, perseverance, resilience, and my go-getter side. That has stayed with me for life. My athletic background comes in handy in everything I do.”

Surin wants to help Olympians showcase the skills and abilities they’ve refined through sport. He hopes to use his personal and athletic backgrounds to guide those following in his footsteps.

Gratitude is one of the driving forces behind his commitment.

“I’m not looking for recognition. If I can make a difference for at least one person, that’s a great accomplishment. Life has given me a lot. Life still gives me a lot. I want to give back. It would be selfish of me to say, ‘I’ve had these opportunities, but you’re on your own.’ I couldn’t do that.”

Surin is now in position to help others because of the people who supported and encouraged him throughout his career. For him, it’s about returning the favor.

“Giving back to others is a way of saying thank you to all those people. It’s thanks to them that I’m here today.”

The talkative and enthusiastic man with an infectious laugh has a clear message for the athletes he is set to lead: