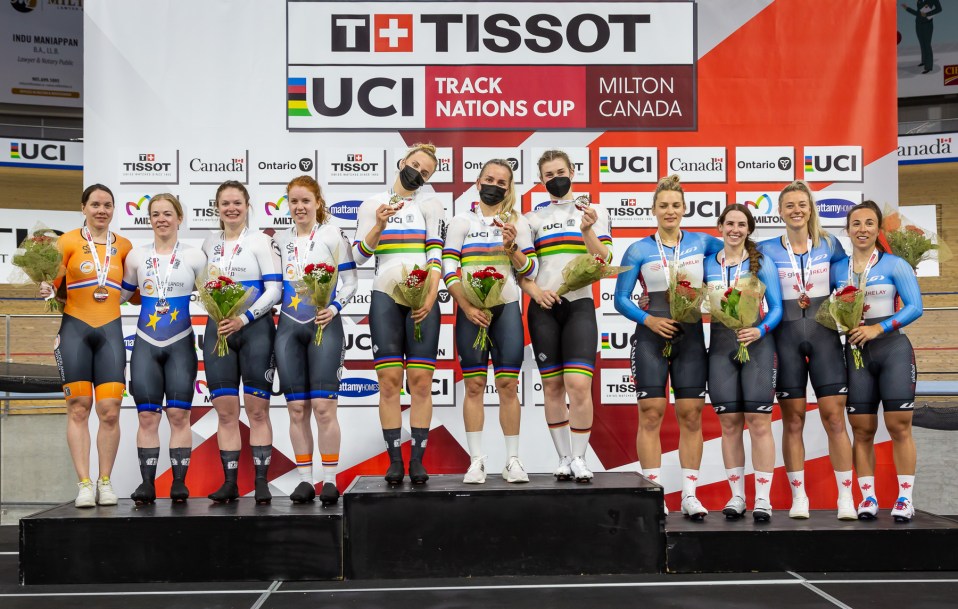 Team Canada is back on the track at the UCI Nations Cup in Milton, Ontario for 4 days of competition. On the first day, Kelsey Mitchell, Lauriane Genest, Sarah Orban and Jackie Boyle claimed Canada’s first medal – a bronze in the women’s team sprint event, after sliver in Glasgow.

Genest, Mitchell and Orban started the day with the third fastest time in the qualifying round, finishing at 47.907 seconds with an average speed of 56.359 km/h. Boyle took Orban’s place in the first round of the competition. The Canadian team then won their heat against Poland and finished with the third fastest time of all heats, which allowed them to advance to the bronze medal final.

Genest, Mitchell and Orban faced Lauren Bate, Lauren Bell and Emma Finucane of Great Britain in the final race. After the first lap, the Brits took a 0.466 second lead, but the Canadians came back to win the race and the bronze medal with a time of 47.817 seconds. The Germans (Lea Sophie Friedrich, Pauline Sophie Grabosch and Emma Hinze) were the big winners of this event, ahead of the Dutch (Kyra Lamberink, Hetty van der Wouw and Laurine van Riessen).

“We’re happy to walk away with a bronze, especially in front of a home crowd,” said Mitchell. “We heard them cheering every time we went up there and it definitely helped give us the legs that we needed. We all gave it our best and it’s awesome to see that there’s four of us that are strong and competing for spots on the team. It’s amazing to watch the program grow and the depth that we have really is phenomenal.”