Tammara Thibeault and Charlie Cavanagh have both booked their ticket to the Women’s World Boxing Championship finals after winning the semifinal bouts of their respective weight classes.

Thibeault had a unanimous 5-0 victory against Mozambique’s Rady Gramane in 75 kg division action. At 1.83m (6ft) she towered over her opponent and was dominant throughout the duration of the fight. Thibeault will face Atheyna Bylon of Panama in the final on Friday.

In the quarter-finals on Monday the 25-year-old boxer defeated Australia’s Anne Parker 5-0 to secure a place on the podium. With that win she match her result from the World Championships in 2019 where she won a bronze medal.

Cavanagh took to the ring to face Ichrak Chaib of Algeria in a clash of welterweights 66 kg. From the start of the bout Cavanagh had the upper hand, but a spirited effort from her opponent kept her on her toes. The fight finished with a 3-2 split decision to move Cavanagh into the finals where she will face Turkey’s Busenaz Surmeneli.

Earlier in the week Cavanagh secured a podium finish by beating Ivanusa Gomes Moreira of Cape Verde 5-0 in the quarter-finals.

The Women’s World Boxing Championships which began on May 9 will conclude on Friday when both athletes will return to the ring to fight for gold. 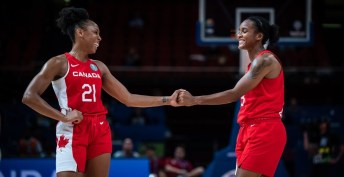