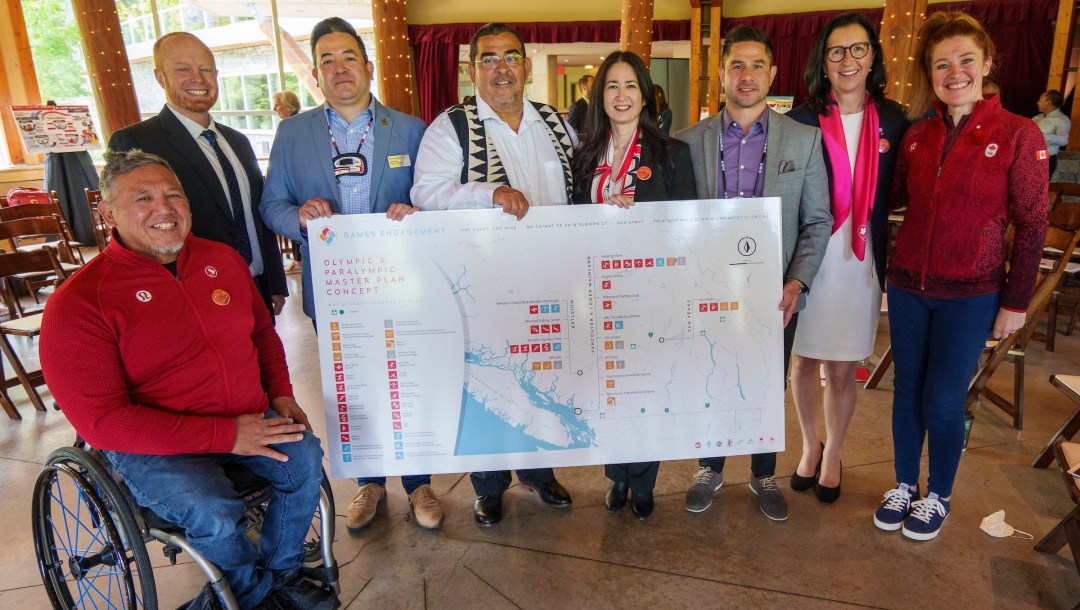 This article was updated on July 8, 2022 to include the financial estimates to host a future Olympic and Paralympic Winter Games in British Columbia.

Twelve years ago, Canada welcomed the world to Vancouver and Whistler for the incredibly impactful and memorable 2010 Olympic and Paralympic Winter Games.

Now, work is well underway with an eye on bringing the Games back again in eight years.

Following several months of discovery, an initial concept to host the 2030 Olympic and Paralympic Winter Games in British Columbia was publicly revealed on June 14, 2022. The financial estimates for the legacy-driven Games followed on July 8.

This exploration is an Indigenous-led, privately funded process. These Games would be a chance to remember our past, renew our present as the country and the world emerges from the pandemic, and reimagine our future as a nation that holds Truth and Reconciliation, sustainability, and our physical and mental health paramount.

The Games would also be an investment in Canada – in jobs, infrastructure, sport, our athletes, and First Nations – and offer an opportunity to revitalize the tourism industry and local economy. These will be the first Games that are required to be climate positive.

Read on for the answers to some of the most frequently asked questions about the history and current status of the effort to bring the Olympic and Paralympic Winter Games back to the traditional territories of the Lil’wat, Musqueam, Squamish and Tsleil-Waututh Nations Canada’s west coast. As more details become available, this page will be updated.

You can also learn more about the vision behind the project and the progress being made by visiting GamesEngagement.ca.

What does it mean that the process to host the 2030 Games is Indigenous-led?

These First Nations have had and will have governance-level oversight at every stage of the project. This is a change from Vancouver 2010 when the Four Host First Nations joined the bid process after it had already begun and advanced.

This new approach stems from a commitment to reconciliation. Truth and Reconciliation Call to Action 91 states “We call upon the officials and host countries of international sporting events such as the Olympic, Pan Am, and Commonwealth Games to ensure that Indigenous peoples’ territorial protocols are respected and local Indigenous communities are engaged in all aspects of planning and participating in such events.”

What cities are included in the concept to host the 2030 Games?

What Vancouver 2010 venues are being included in the 2030 Games concept?

Many venues used for Vancouver 2010 – some of which were newly built for those Games while others were already existing – would once again play host to Olympic and Paralympic competitions and celebrations.

It includes four competition venues on the Lower Mainland:

In addition, BC Place would host the Olympic Opening and Closing Ceremonies once again as well as the Paralympic Opening Ceremony. The Vancouver Convention Centre would be the site of the Main Press Centre and International Broadcast Centre.

What other existing venues are being included in the 2030 Games concept?

What new venues will need to be built for the 2030 Games?

A temporary ramp for the big air events in freestyle skiing and snowboard would be constructed at the Hastings Racecourse near the Pacific Coliseum and Agrodome.

All other Olympic freestyle skiing and snowboard events would be held at the Sun Peaks Resort, which has recently hosted national level competitions in both sports.

A new stadium and courses would be constructed at Whistler Ptarmigan for alpine skiing technical events as well as para alpine skiing.

There are a few key categories into which the financial estimates can be divided.

How will public funds be used for the 2030 Games?

Public funds will be directed towards the elements of the Games that will have a direct impact on the region: venue upgrades, housing, legacy funds, and security. This is all part of the Games being sustainable and values-led.

How will spending money to host the 2030 Games create a legacy?

Investing in necessary upgrades to existing venues would renew them for at least another 20 years. That will allow these much-used facilities to continue to bring in revenue and provide a legacy that contributes to the mental and physical health of local residents, sport infrastructure in Canada, and the development of Canadian athletes.

As an example, the Richmond Olympic Oval is visited by about one million people every year while it serves as a multi-purpose hub of sport, fitness, and wellness for the community. By upgrading the ice plant that would create the 400-metre surface for long track speed skating, the future of the two ice sheets that are used by locals outside of the Games would also be assured. Ice plant upgrades are also planned for Pacific Coliseum, the Agrodome, and the Whistler Sliding Centre.

The Games will kickstart important housing development in both Vancouver and Whistler and ensure First Nations housing legacies. The Olympic and Paralympic Village in Vancouver would be an example of Reconciliation in action with the development led by MST Development Corporation, a partnership of the Musqueam Indian Band, Squamish Nation, and Tsleil-Waututh Nation.

What are the potential economic benefits of hosting the 2030 Games?

When talking about costs, it is important to know that for every dollar spent by the region, there would be several more coming back from outside that would stay in the region. This would not be achieved if the Games did not take place. Vancouver 2010 created an estimated 45,000 jobs and contributed more than $2 billion GDP to British Columbia’s economy.

Each upgraded venue provides an opportunity for further impact. As an example, the Vancouver Convention Centre (which was constructed as the International Broadcast Centre for the 2010 Games) brings in several hundred millions of dollars in economic impact each year. Tourism can get a huge boost, as has been seen in Whistler and in the Indigenous tourism sector since 2010.

What are the proposed dates for the 2030 Games?

Where are we in the bid timeline for the 2030 Games?

It begins with a non-committal Continuous Dialogue phase during which interested parties talk to the IOC about potential bids for future Games and receive support to analyze and assess their projects.

Then comes the Targeted Dialogue phase which opens when the IOC Executive Board invites one or more Preferred Host(s) to have more detailed discussions to refine their proposal for a specific edition of the Games. After several months in this phase, the Future Host Commission prepares a report to be considered by the IOC Executive Board. The Board then decides whether to recommend one or more Preferred Host(s) to the IOC Session for the final selection.

In December 2021, the Four First Nations, the City of Vancouver and the Resort Municipality of Whistler signed a Memorandum of Understanding to explore the feasibility of hosting the 2030 Olympic and Paralympic Winter Games in British Columbia.

From January to June 2022, the feasibility study was undertaken by the COC, CPC, Four First Nations, and experts hired by the COC.

On June 14, 2022, the Games hosting concept was publicly revealed in a traditional Indigenous ceremony. Through July that concept will be reviewed by all Games partners – including all levels of government – for their approval.

From July 2022 to November 2022, public engagement is taking place to talk to people about the Games and the opportunities they provide.

From November 2022 to April 2023, the hope is to be invited into the Targeted Dialogue phase with the IOC and launch a formal bid.

What other regions are considering a bid to host the 2030 Games?

In addition to Canada, three other countries had publicly expressed interest in hosting the 2030 Olympic and Paralympic Winter Games:

On June 21, 2022 the Spanish Olympic Committee announced that it would be withdrawing from the bid process.

When will the host for the 2030 Olympic and Paralympic Winter Games be announced?

It is anticipated that the IOC will name the host of the 2030 Olympic and Paralympic Winter Games during the IOC Session in May 2023.

What do you remember most about Vancouver 2010? Stir up the nostalgia and share your stories about what those Olympic and Paralympic Winter Games meant to you.