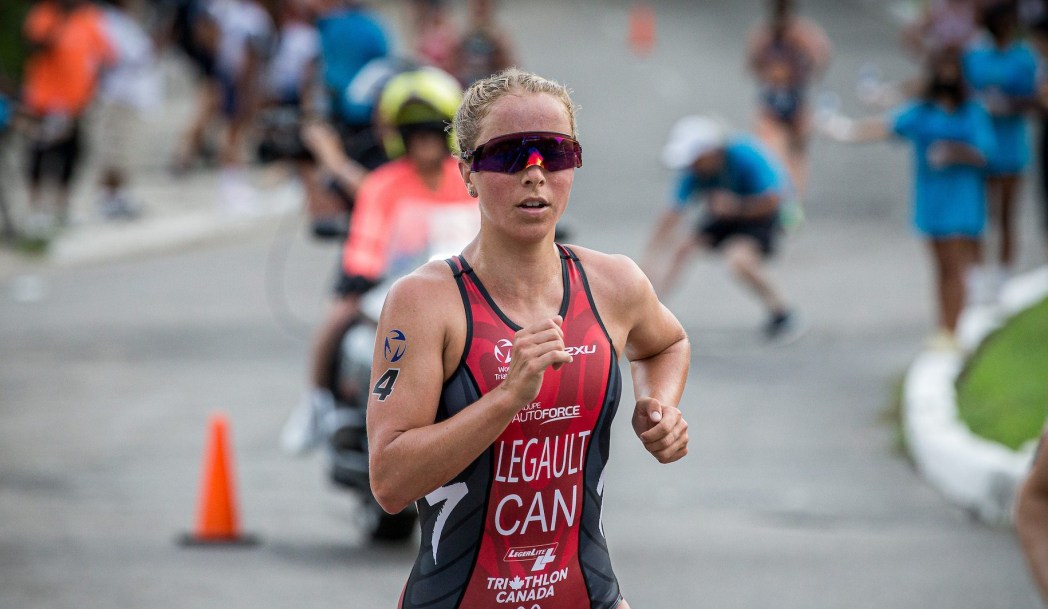 Team Canada stood out at the Triathlon World Cup in Huatulco, Mexico with two silver medals from Emy Legault and Tyler Mislawchuk.

In the women’s event, Legault ran her way to her first career World Cup podium on Saturday evening. In this sprint-format race, the 26-year-old Quebecer clocked a total time of one hour and 13 seconds to finish second behind Germany’s Annika Koch (1:00:01). After a sprint finish with Legault to determine the final two spots on the women’s podium, Italy’s Bianca Seregni (1:00:15) was forced to settle for the bronze medal.

“At first I couldn’t believe it but it is starting to soak in now so I’m pretty happy.”

Legault was well placed in the water until things got rough with the 55-woman field fighting for position around the first buoy. Legault continued to battle into the top-10, exiting the 750m swim just 30 seconds behind the lead. She picked up four spots on the field while charging out of first transition and onto the four-lap bike course. Conditions were hot and humid, with temperatures approaching 30 degrees Celsius.

The race was very tight at the end of the cycling portion with 28 athletes within eight seconds of the lead. The race was going to be played on the 5 km of running where Legault stood out. The Canadian and German went stride-for-stride in the first half of the 5km run. Legault was out front heading onto the second lap, but Koch pulled away in the final lap, leaving the Canadian and Italian to battle it out for silver and bronze. Racing shoulder-to-shoulder, Legault found the power to overtake Seregni in the last metres of the race to climb the second step of the podium.

The Canadian athlete finished 14th last year at the same venue. On Saturday, Canadians Dominika Jamnicky placed 11th at 1:00:55 and Kira Bupta-Baltazar finished 39th with a time of 1:04:32. She was second in the swim but experienced a crash while on the bike.

On the men’s side, the two-time defending champion Tyler Mislawchuk was trying to match this feat once again in Huatulco, but came up short finishing in second place. The two-time Olympian raced at the front of the pack throughout all three disciplines. With 40 riders charging into the second transition within five seconds of the lead, it was clear the hunt for the podium would be determined by foot.

It was a battle down to the blue carpet with the top three athletes finishing within three seconds of one another. In a thrilling end, Spain’s Genis Grau resisted the pressure of his competitors and edged out the Canadian for his debut victory with a time of 53 minutes and 47 seconds. Mislawchuk finished the 750m swim, 20km bike and 5km run a second later (00:53.48) to capture silver. This marks his third straight World Cup podium in Huatulco. Brazil’s Miguel Hidalgo (00:53.50) followed the Canadian in third.

“This feels pretty darn good. You never know when your next one (podium) is or when your last one is so after a year like last year with the achilles tear, I wasn’t sure I’d ever be on one of these again. I am thankful. I wasn’t even sure I’d make a start line about 12 days ago so I am really happy to be standing up here because it has been a long road,” said 27-year-old Mislawchuk following his race.

From June 24-28 the Canadians are heading to the World Sprint and Relay Triathlon Championships in Montreal.