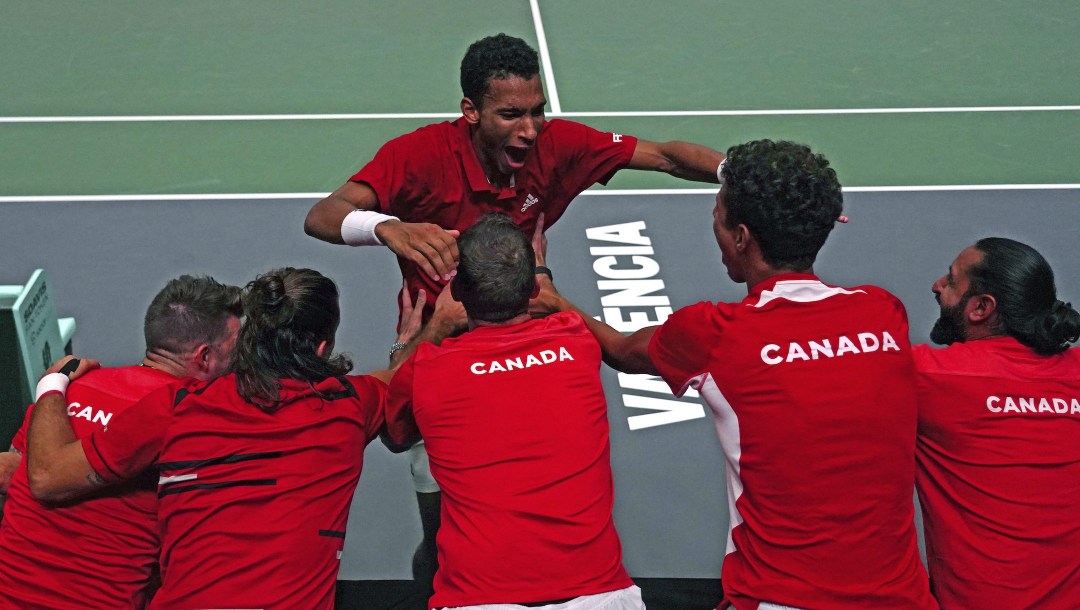 Félix Auger-Aliassime‘s straight-set win over Serbia’s Miormir Kecmanovic on Saturday during the final tie of the group stage at the 2022 Davis Cup, guarantees Team Canada a spot in the knock-out stage in November.

Team Canada lost the tie to Serbia 2-1 in Valencia, but finished in the top two of Group B with a 2-1 record to book a ticket to the finals in November. All four members of the Canadian team participated in the tie on Saturday.

Gabriel Diallo had his debut in Davis Cup competition for Team Canada on Saturday. The 20-year-old fell in his first match to Laslo Djere in straight sets of 6-2, 6-2. He fell behind an early break in each set, unable to recover. The Canadian struggled under the constant pressure from Djere, leaving it up to Auger-Aliassime to book Team Canada’s spot in Malaga.

Since the Canadians have won both their ties so far, they only needed to win one of their remaining matches on Saturday to book their place in the knockout stage.

Trailing Serbia 1-0 in their final group stage, Auger-Aliassime rose to the occasion to claim a 6-3, 6-4 win and the final point Canada needed to guarantee a top-two finish in Group B. There were no signs of exhaustion from Auger-Aliassime, who played a nearly perfect match against an opponent he had never previously won a set against.

Shortly after, Davis Cup veteran Vasek Pospisil teamed up with Alexis Galarneau for the final doubles match. Unfortunately, Pospisil was forced to retire from the match due to injury, giving the win to Serbia.

Previously on Friday, the Canadians stunned the hosts Spain 2-1 in Valencia. The two nations split the singles matches before the Canadians rallied from a break down in the third set to claim victory in the decisive doubles match.

In the opening singles match, Pospisil was beaten in three sets by Spain’s Roberto Bautista Agut. Pospisil took the opening set but the Spaniard dug in and proved too consistent for his Canadian opponent, securing a 3-6, 6-3, 6-3 win.

The second singles match saw Auger-Aliassime stun the new world No. 1 Carlos Alcaraz. Right from the start, the Canadian was playing at a high level, applying constant pressure. In a nearly three-hour battle of rallies and stunning shot-making, the Canadian silenced the home crowd with a 6(3)-7, 6-4, 6-2 victory and joins a short list of Canadians to defeat a current world No. 1. By ranking, it is the biggest win of Auger-Aliassime’s career as it was his first win over a world No. 1.

Less than an hour after Auger-Aliassime completed his singles match, he returned to the court with Pospisil for another thrilling comeback. Everything came down to this final match against Marcel Granollers and Pedro Martinez. The Canadians were unable to get anything going on the Spanish team’s serve in the opening set, which they dropped 4-6. The Canadians continued to press in the second, saving a couple of break points before converting their first break point of the match at 5-4 to send the entire tie to a final set. Pospisil then stepped up and served the Canadians to a 6-5 lead and they again applied heavy pressure to the Spaniards. When it mattered most, Auger-Aliassime and Pospisil played their best tennis, breaking Granollers to seal the win for Canada, 4-6, 6-4, 7-5.

Earlier this week, Team Canada defeated the Republic of Korea 2-1 in a thrilling opening midnight clash at the 2022 Davis Cup Finals group stage. Pospisil came up big in his two matches, rallying from a set down to capture the opening singles match, 4-6, 6-1, 7-6(5). In the second singles match, Auger-Aliassime made it look like victory was imminent, but the world No. 13 suffered an unexpected letdown as he was beaten by Soonwoo Kwon in straight sets, 6(5)-7, 3-6.

Then two Canadians teamed up to clinch the tie in a wild doubles match against Nam Jisung and Song Min-Kyu of South Korea. After a pair of back-and-forth sets, the Koreans appeared to be on their way to victory with a break early in the decider, but the Canadians dug deep and never stopped fighting, winning the last five games in a row to seal the victory and win the tie for Canada 7-5, 5-7, 6-3.