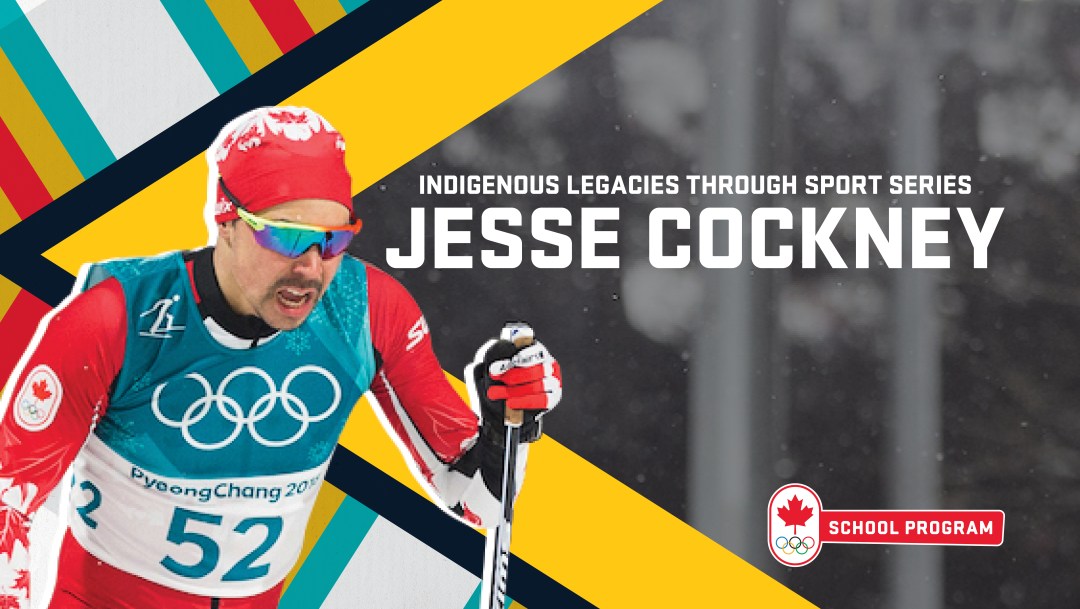 It was at only the age of three that Jesse Cockney began cross-country skiing while growing up in Yellowknife, Northwest Territories. His father, Angus Cockney, was a national champion in the sport. Jesse’s father was a mentor to him not just in skiing, but also culturally.

It was through his father that he learned about traditional teachings of the Inuvialuit people. Everything Jesse learned about his culture, traditions, and community gave Jesse a great appreciation and gratitude to where he was from.

“Both my parents are really amazing artists and shared that love of art with my sister Marika and I.”

Jesse’s fathers art was mostly stone carvings. “So much of Inuit art is depicting life. Whether that’s animal life or spirit tales of creation. That was my connection back to Inuit culture, just being immersed in art and learning culture through Dad’s perspective.”

At the age of seven, Jesse and his family moved from Yellowknife to Canmore, Alberta to better support Jesse’s skiing. “What Canmore provided for me was a really great community to fall in love with skiing. It was very typical to care a lot about sport and to really focus and dedicate your time to try to get better.”

Jesse’s sport of cross-country skiing has helped him connect gratitude with the ability to get out on the land and ski. The concept of co-existence with the planet in Inuit culture and traditions has remained important to Jesse.

“A big part of Inuit culture is recognizing that we are all one piece, maintaining the planet in its current state. With cross-country skiing, it requires cold winters with lots of snow and consistent temperatures, co-existence is so important. For centuries, even with the harsh and cold temperatures year round, the people there were able to peacefully co-exist in a harmonious system with the land, the water, the animals, and nature” explains Jesse.

“We are moving away from the perspective of co-existing and there is more of a domination of the land going on now. We are all a part of the problem and there are things we can all do to work to maintain equality and harmony with the land.”

Jesse knows that we need to take action now to face climate change. “If it gets too hot and we don’t have consistent temperatures, that means that cross-country skiing wouldn’t be able to take place.”

In 2011, Jesse won three gold medals in the Canada Winter Games. Jesse’s career then advanced to the international stage. In 2014, Jesse competed in his first Olympic Games in Sochi and then returned to compete at PyeongChang 2018.

Jesse is not only grateful for the planet, but he also carries gratitude with him to each race. “Having the opportunity to do what I love every single day is such a privilege. I felt really grateful in the periods I was actually not racing that well because at the end of the day, I’m still racing and I still have this unbelievable opportunity to just focus on being my best. It is important to have moments of reflection and remembering it’s what I love to do and be grateful I have the chance to do it.”

When Jesse isn’t skiing, he teaches students all over the country lessons about community, healthy living, goal setting, and perseverance.

“Spending the entire year with the same group of kids, you really get to see them take on challenges, struggle, and learn something about themselves through it, so that was really fun,” Jesse reflects on his time spent in schools.

Jesse’s advice to young students in school: “Know yourself, know what you love and to seek out others in that same direction of your goals. I am a big believer in teamwork. As much as someone can want something individually, I think it is so much more valuable to take on big goals and dreams together.”

Jesse Cockney’s story was originally featured as part of the Canadian Olympic School Program’s Indigenous Legacies through Sport Series, alongside the story of hammer thrower Jillian Weir. The resources at the link above are available in two different reading levels and are accompanied by discussion questions and learning activities.