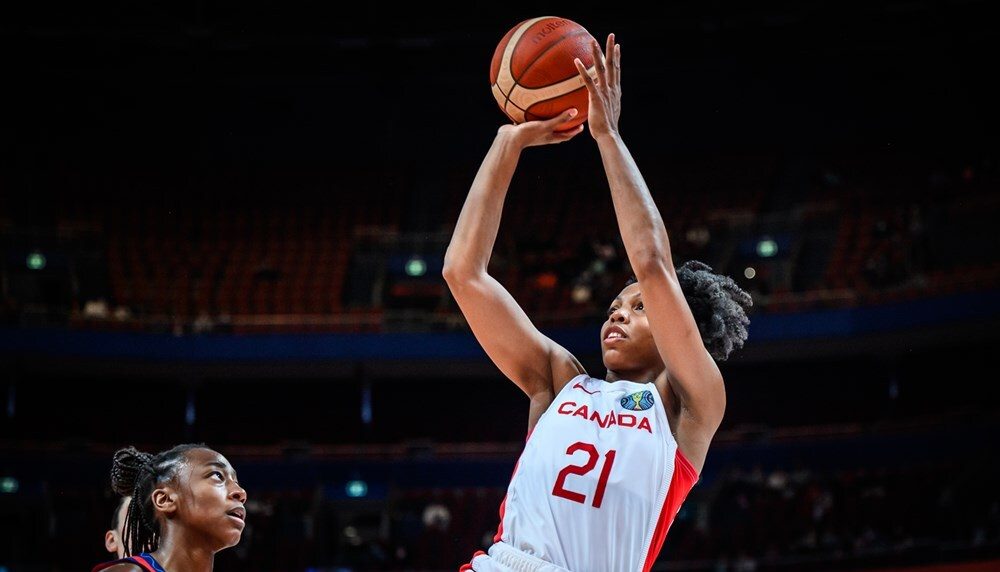 Canada will face Australia in the bronze medal final after losing 43-83 to the United States in the semifinals of the Women’s Basketball World Cup in Sydney, Australia on Friday.

This was the first time Team Canada had appeared in a World Cup semi-final since 1986.

READ: Team Canada is off to the semi-finals at the Women’s Basketball World Cup for the first time in 36 years

During the loss, no Canadian player managed to collect more than 9 points — which was a first for the team since since 2014. Laeticia Amihere scored eight points while Kia Nurse added seven. On the court for just 13 minutes,18 year old rookie — Phillipina Kyei found her defensive groove blocking three shots.

The Canadians got off to a slow start to the game, only getting on the board after more than five minutes of play after the Americans had built a 15-0 lead. They let their opponent slip away with ending the first quarter in a a 20-point deficit.

In the second quarter, Canada had a better performance as their defence started to heat up. Kyei made two blocks in quick succession. The United States was able to increased their lead by just four points winning the quarter 18-14.

The third quarter saw minimal baskets while both teams struggled to find their groove. The Americans found theirs late into the quarter capping off their run with a three-point shot at the very end of the quarter, scoring 22 total points in the third against Canada’s eight.

Taking it to the bench squad in the fourth Canadian reserves Amihere, Sami Hill, Mael Gilles, Aislinn Konig and Taya Hanson got to work. They managed to contain the Americans, keeping the game interesting by forcing turnovers and increasing their attacks. The score for this quarter proved to be the tightest of the game with 16 points for the United States against 14 for Canada.

After a 43-83 loss Canada looks to the bronze medal match where they will face Australia — the loser of the other semi-final game that saw China win 61-59 in a close battle for the finals.

In the bronze medal final, the Canadians will try to match their result from 1986 — the last time Canada stood on the podium at the Women’s Basketball World Cup.

Australia is the only team to have defeated Canada in round robin play, as the Canadians lost 75-72 in a very close game.

READ: Canada to face Puerto Rico in quarterfinals of the FIBA World Cup

The team crowned World Cup champions will also be awarded a coveted qualification spot for Paris 2024.

Laeticia Amihere debuted for Canada in 2015 with the cadet national team, winning Canada’s first ever gold at the U16…