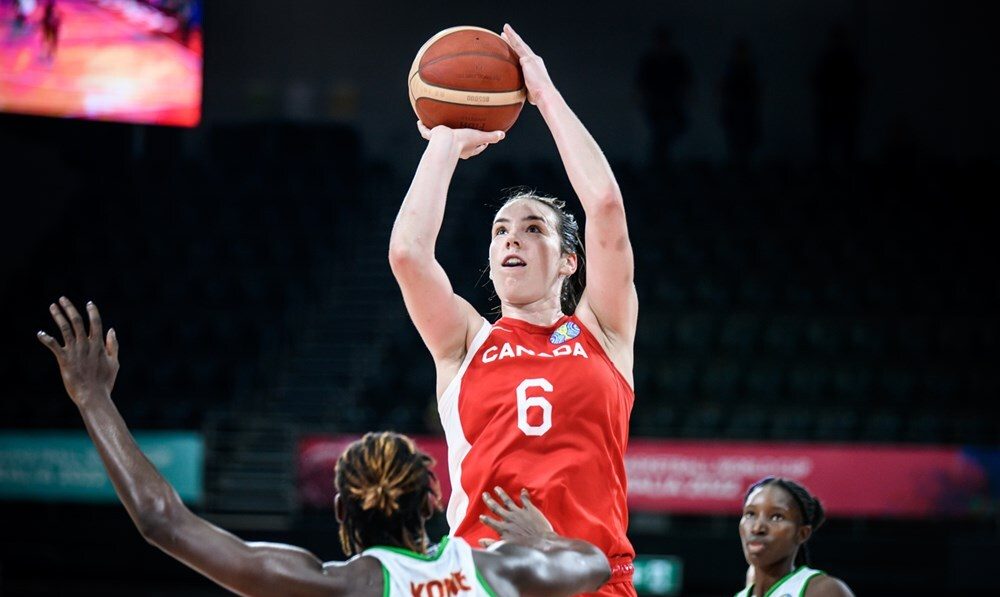 Team Canada concluded the group stage of the FIBA ​​Women’s Basketball World Cup in Sydney, Australia with an 88-65 win over Mali on Tuesday.

Canada has a record of four wins and one loss sitting second in Group B behind Australia. With a win over Japan on Sunday, they had already guaranteed their spot in the quarter-finals after accumulating three wins during group play.

In their final round robin clash against Mali, Canada led the game from start to finish. Bridget Carleton scored an impressive 27 points. Kayla Alexander had 19 points and 14 rebounds, in addition to four assists and three blocks. Aislinn Konig and Kia Nurse both also joined in on the fun collecting 11 points each during this Canadian victory.

Canada had control the whole game, leading by 17 points after the first quarter they extended their lead to 24 points midway through the game. The score in the third and fourth quarters was virtually even for both teams, allowing the Canadian squad to maintain their lead and claim victory.

The draw to determine which teams will face off in the quarter-finals took place on Tuesday. Canada will take to the court against Puerto Rico on Thursday. The team crowned champion of the tournament on October 1 will qualify for Paris 2024.

Canada suffered its first loss of the Women’s Basketball World Cup on Monday against Australia, losing 75-72 in a tightly contested game.

Nirra Fields scored 17 points throughout the game, while Bridget Carleton tallied 16 of her own.

The Canadians were in the drivers seat in the first and third quarters while the Australians dominated the other two quarters as the two teams fought one another for the lead. Canada shot 38 percent and went 11 for 22 from behind the three-point line, while Australia shot 43 percent in the game and also sinking 11 three-pointers of their.

Not to worry though, Canada had already secured its place in the quarter-finals with a win over Japan on Sunday.

The Canadians collected their third Group B win in a row with a real statement of intent against Japan.

Canada was led by a 19-point, six-rebound performance from Bridget Carleton. Shay Colley also had a strong game, earning 13 points and seven rebounds.

“That was a big game for us,” Carleton said. “Obviously we played Japan in February, we were up by a lot and they ended up forcing it to overtime and we ended up losing. That was kind of on the back of our minds today but, again, it felt good to win. That’s a tough team, they’re hard to play against, they’re fast, they like to shoot the three-ball so it’s a tough matchup, [so it’s] definitely good to come away with the win. And it felt good to see some shots go in for me.”

Carleton shot 8-for-14 from the floor, including 2-for-5 from beyond the arc while adding six rebounds, an assist, a steal and a block in 32 minutes of action. The team went scoreless until the 6:04 mark, when Carleton scored Canada’s first five game points.

Canada shot 45 per cent in the half while their defence helped hold Japan to just 29 per cent shooting, while also forcing 10 turnovers. Kayla Alexander opened the second half with a layup to extend Canada’s lead to 18.  After a jumper from Colley, Canada led by 20 and continued to score, closing the quarter on a 9-0 run.

After Japan opened the fourth with a 7-0 run to get within 15, Canada called a timeout with 7:48 remaining. For the third consecutive game, the Canadians appeared relaxed and in control when their opponent attempted a push. Despite Japan’s strong start to the final quarter, Canada’s lead was never in doubt in the final frame.

Canada has two more games remaining in the group phase, with the next match up coming on Monday at 6:30 a.m. ET against host-team Australia. The Canadians are looking forward to playing in front of a packed crowd of passionate fans rooting for the home team. They are determined to not allow that to impact their game plan.

The matchup looked to be relatively even on paper with France ranked 6th in the FIBA standings, while Canada entered the tournament ranked 4th.

The result was not so even as Canada stymied France’s offense and opened up a 20-point lead by the 3rd quarter. Nirra Fields led the way offensively with 17 points; getting her buckets off of smooth finishes at the rim and behind the three point line.

Kayla Alexander had another strong game as she collected 14 rebounds, and added 9 points.

Canada only shot 29.4% from the field but dominated on the boards and made it to the free throw line 12 more times than France.

With the win, Canada is now the only unbeaten team in Group B. They have three games remaining in pool play, with the next game coming on Sunday against Japan.

Canada’s women’s basketball team opened up the FIBA World Cup with a statement victory over a tough Serbian squad by a final score of 67-60.

After falling behind 16-15 after one quarter of play, Canada dominated the second quarter of play and never gave up their lead. They weathered a late run by Serbia to hang on for a seven point win.

Kia Nurse made her return to the lineup after being sidelined for 11 months while recovering from a knee injury. She didn’t miss a beat – scoring nine points and adding 3 assists.

The preliminary phase of the FIBA ​​Women’s Basketball World Cup will continue until September 27. In Group B, in addition to Serbia, Canada will face France, Japan, Mali and the host country Australia. The quarter-finals will begin on September 29 and the final will take place on October 1. The champion of the tournament will automatically qualify for Paris 2024.

Canada, ranked 4th in the world in the FIBA Standings, is the highest ranked team in Group B. They will take on 6th-ranked France on Friday.

Bridget Carleton first played for Canada at the 2013 U16 FIBA Americas, serving as captain and leading the team to…