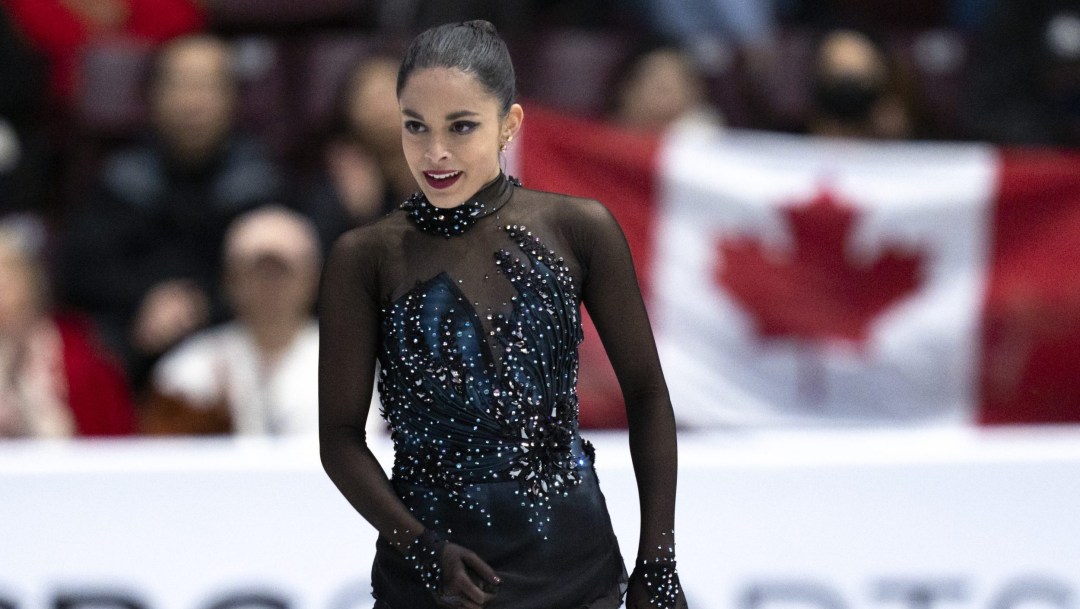 Short program day at Skate Canada International was certainly a successful one for the home team.

At the second stop of the ISU Grand Prix Series, Piper Gilles and Paul Poirier hold onto top spot after the rhythm dance as Madeline Schizas and Gabrielle Daleman sit first and second after the women’s short program. Meanwhile Keegan Messing as well as Brooke McIntosh and Benjamin Mimar are in striking distance of the podium in the men’s and pairs events.

Here’s a look at what happened on Friday:

Gilles and Poirier will take a 3.43-point lead into Saturday’s free dance after earning 87.23 for their modern take on the required Latin rhythms.

“I think we’re happy with this new sexy, sophisticated version of Piper and Paul,” Gilles said of their rhythm dance to “Do What I Do” by Lady Bri, which stands in contrast to the quirky or folky programs they’ve done in recent years.

After the high stress of an Olympic season amidst a pandemic, they decided to take a little more time away from the ice during the off-season. That led to them having a later start, opting out of any Challenger Series events for the first time in their careers. The benefit was they arrived at Skate Canada feeling “quite fresh” despite the usual jitters that come with showing their programs for the first time.

“You don’t know how it’s going to be received, if people are going to enjoy it, if the crowd is going to get into your energy, but I think we were able to put all those things aside,” said Poirier. “The goal for this season, especially for this first competition, was to just get out and compete with that joy of skating again and I think we really felt that between the two of us today.”

“We’re just trying to be humble and not put too much pressure on ourselves,” added Gilles, who said they most definitely have goals for this season but “sometimes verbally not speaking them is better for us because we’re not putting this unnecessary pressure on ourselves. We know we can do the job, at the end of the day.”

The other big difference for them this season is that they are not looking four years down the road to the next Olympic Games.

“In some ways it’s just nice to have that short term focus and take it competition by competition and season by season,” said Poirier. “More than anything we’re really trying to enjoy every single moment this year and not get caught up in the big picture. At least so far, this mentality has let us enjoy the last few months of training and the direction we’re going in artistically and I think we just want to keep riding that for the next few months.”

There are two other Canadian ice dance duos competing this weekend. Marjorie Lajoie and Zachary Lagha sit in fourth place with 75.94 points, but are just 0.19 off a podium position. Marie-Jade Lauriault and Romain Le Gac – who won bronze last weekend at Skate America and are here as injury replacements – hold onto fifth place with 74.59 points.

Schizas took the lead in a tight competition with a clean skate that earned her 67.90 points. That effort included a triple lutz-triple toe combo as well as a level four step sequence, something she was particularly excited to earn. The one blemish was a one-point deduction for a time violation.

“I really wanted to skate well at home in front of everybody and I think that made me a little more cautious than I would have liked to be, but we’re nitpicking at this point,” said the reigning Canadian champion.

“It was a magic feeling and skating like that it’s just very overwhelming,” said Daleman, who scored 66.65 points to sit in second, 0.16 ahead of American Ava Marie Ziegler.

Schizas competed at her first senior nationals in 2020 where she won the bronze medal. Just 16 at the time, she recalled she was more excited about Piper Gilles’ dog Scout being in the change room than about being a national medallist.

Two years later she was Canada’s lone competitor in women’s singles when she made her Olympic debut at Beijing 2022. That meteoric rise to be Canada’s number one woman set up some expectations that she thinks got to her during a Challenger Series event, Nebelhorn Trophy, a few weeks ago.

“I’d been on a bit of a streak of pretty good skates in a row and everyone was like you’re so consistent, you’re so good at handling your nerves, so good at holding it together. I think I let that get to me a little bit. So, in a way, Nebelhorn, the bad skate there was a bit of a blessing because I got home and was like well, we’re still orbiting the sun. It’s really not the end of the world to skate bad every once in a while.”

For Daleman, who won world championship bronze in 2017 and was part of Canada’s gold medal in the Olympic team event at PyeongChang 2018, it has been a long journey back to being in podium contention. Because of various injuries and illnesses, she hadn’t competed in a Grand Prix event since Skate Canada International in the fall of 2019, where she finished 10th.

After placing third at the Canadian Championships in January, she went to the Four Continents Championships, but then, as she put it, “it was just not my summer.”

“I tore my abdomen and groin on just a normal training day. Got COVID after a family vacation. Was on my way to training and got sideswiped on the highway and then from so much stress and anxiety ended up getting diagnosed with Bell’s Palsy so it was a whole lot of not my luck this summer.”

But it was the dream of having a performance such as she did on Friday that kept her going.

“I didn’t want to end my career in a COVID season, that’s for sure,” Daleman said, referring to the audience-less competitions that had become the norm over the last two years. “I’ve been on the (international) circuit for 10, 11 years so it’s definitely been a great career. I wanted to be back with the audience in my atmosphere and just bring more people in. That’s exactly what I did and I couldn’t be prouder of myself.”

While swimming sensation Summer McIntosh was busy winning gold at the FINA World Cup in the east end of Toronto, older sister Brooke was just outside the western edge of the city, making her Grand Prix debut with partner Benjamin Mimar in Mississauga.

They were the top Canadian pair in the short program, placing fourth with 60.82 points.

“It wasn’t perfect, but overall happy with the performance. The fans were really loud tonight and it feels really good,” said Mimar, who made a slight error on their side-by-side triple toes when he fell out of the landing and had to put a hand down.

When asked which daughter her parents were watching, McIntosh paused momentarily before declaring “I believe they’re here” and then laughing. “They’ve been to a couple of Summer’s swim competitions and they haven’t had the opportunity to come to as many of mine, so they are here tonight.”

Bronze medallists at the world junior championships this past spring, McIntosh and Mimar have a goal of competing at their first senior worlds later this season. The opportunity is certainly there with Canada able to send three pair teams.

At 17 and 21, they are still developing in the sport but know exactly what they want to work on moving forward.

“The other thing would be consistently getting the levels that we want,” added McIntosh.

Canada’s other pair entry, Kelly Ann Laurin and Loucas Ethier, who won a surprising bronze at Skate America, are in eight place with 50.84 points. The leaders are Riku Miura and Ryuichi Kihara of Japan with 73.39 points, putting them well ahead of Americans Emily Chan and Spencer Akira Howe (67.39) and Italians Sara Conti and Niccolo Macii (66.66).

That was the best way Messing could summarize what happened in his short program, which began with a hard fall on his quad toe.

“I stepped on the foot, it just didn’t feel right,” he said, noting it was a moment of “just pulling in to get the rotations done and bracing for the inevitable impact that was soon to happen.”

He then made another costly error when he was unable to turn his triple lutz later in the program into a combination jump, meaning he was missing a required element.

But Messing was hardly alone in making mistakes as multiple men popped or fell on jumps. With 79.69 points he is in fourth place but just 1.49 points behind Italy’s Matteo Rizzo who currently sits in the bronze medal position. Reigning world champion Shoma Uno of Japan is in second with 89.98 points while his countryman Kao Miura leads with 94.06 points.

Messing has said this will be his final competitive season. He wants to join the fire department in his hometown of Girdwood, Alaska as well as continue to do some show skating in the future. As he waited for his score in the kiss and cry, he unveiled several ultrasound photos, announcing to the world that his son Wyatt would soon be a big brother.

The due date for baby number two happens to fall in the middle of the Canadian Championships in January. “Can’t seem to do anything the easy way,” Messing chuckled.

He was also reflective of what he wants this season.

“I’m not really skating for placement,” he said. “This year is for me. I went out there and I was just having fun. Yeah the jumps weren’t there but I gave it my all, I was having fun with my footwork, I was playing with the crowd and, gosh, the crowd was right there behind me on home ice and it’s my last Skate Canada International.

“I’m gonna be leaving here with a smile on my face.”

Skate Canada International will conclude on Saturday with all of the free skates.