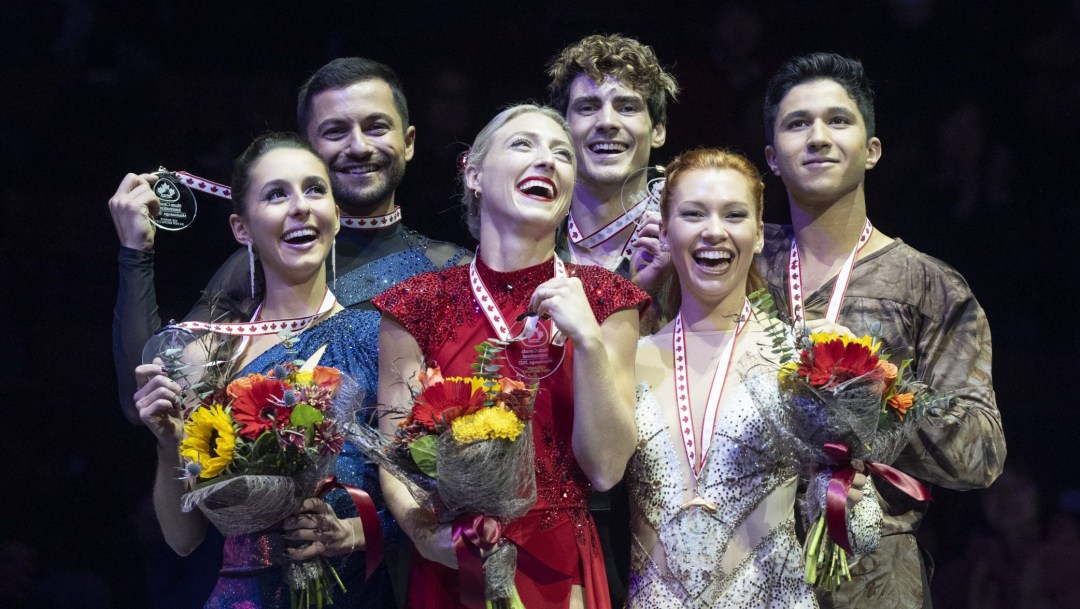 Two out of three ain’t bad.

Canadian ice dance teams claimed two spots on the podium at Skate Canada International on Saturday as Piper Gilles and Paul Poirier won gold while Marjorie Lajoie and Zachary Lagha moved up a place to take home the bronze.

Gilles and Poirier delivered a stunning debut of their free dance to music from the musical Evita that earned them 128.47 points for an overall total of 215.70. That gave them the victory by 6.52 points over Lilah Fear and Lewis Gibson of Great Britain, who had the crowd rocking with their performance to Lady Gaga’s “Born This Way”.

Lajoie and Lagha, who train alongside the Brits at the renowned Ice Academy of Montreal, earned their first career Grand Prix medal. They jumped from fourth after the rhythm dance with their lyrical free dance that earned 119.55 points for an overall total of 195.49.

“I think we had an absolute blast performing Evita for the first time,” said Gilles. “I think we really just let the story tell itself and to enjoy the moment and to be back on home soil and skating again in front of all our amazing fans and family, it was a really special moment and we’re very proud of what we did today and yesterday.”

“We returned this season after the last Olympic cycle really putting ourselves as people first and our joy of skating forward and so that mindset was really critical in creating the moment we were able to have today between the two of us and between us and the audience,” added Poirier.

“The program was really good today. Not gonna lie, we felt nervous but we were able to forget what was around us,” said Lagha, who described it as if everything around him and his partner was blurry. “It was only Marj and me and that was it.”

“My whole family was there, boyfriend, aunties, so I was more stressed but at the same time you want to skate even better, so that’s why I was so happy after the free to manage that stress and give a very good performance,” added Lajoie.

Lajoie and Lagha will compete again in two weeks at the MK Wilson Trophy in Sheffield, England where this time Fear and Gibson will have the home crowd behind them. Gilles and Poirier will return to Grand Prix ice in Espoo, Finland on the last weekend of November. Canada’s third team, Marie-Jade Lauriault and Roman Le Gac placed fifth overall in their second and last Grand Prix of the season.

In what was his last international competition on Canadian ice, Messing delivered all kinds of emotions. He started with two superb quad toes before miraculously managing to stay on one foot while landing a triple axel, prompting huge cheers from the audience that adores him. They clapped throughout the upbeat portions of his program to “Home” by Phillip Phillips and roared when he showcased his spread eagle and low-to-the-ice hydroblading.

“I couldn’t have asked for a better skate, honestly. To go out and put out a performance like that, I’m so happy. I keep saying I’m not skating for a medal, I’m skating for myself, and I didn’t realize how much more terrifying that was to do something like that, so I was shaking getting out onto the ice,” said Messing. “I can leave excited and happy that I did it, I came all this way, I had family here, my heart is full. I’m just on top of the world.”

Family is all important for Messing these days. He revealed on Friday that a baby would be joining him, wife Lane, and son Wyatt in January. His free skate is emblematic of the people most important to him.

“We’ve had the beginning part and a new part in the middle of the program both composed and its drawn inspiration from family, a lullaby, to have thoughts of the kids,” he explained. “When I start this program all I can think about is the family and it just calms me right now and I can just start skating into the ice and it’s amazing.”

After missing his chance to compete in the Olympic team event at Beijing 2022 because COVID-19 prevented him from departing Canada on time, Messing wants to finish his career as part of Team Canada at the ISU World Team Trophy in April. Before that he’d like to make one more appearance at the ISU World Championships. His next Grand Prix event will also be in Finland.

The other Canadian highlight in the men’s event was the performance of Stephen Gogolev, who placed fifth in the free skate to move up to seventh overall. After a disastrous short program, he managed to land all three of his planned quads (with only a hand down on one) along with two triple axels, showcasing the true potential of the 17-year-old. His next Grand Prix is NHK Trophy in mid-November.

It was a tough day for both Madeline Schizas and Gabrielle Daleman who fell from first and second after the short program to finish seventh and 10th, respectively.

Though Schizas did not want to make excuses for her performance, after she had finished, she picked up a plastic tube from the ice – the type that go on the end of single flowers which had been thrown by fans throughout the afternoon.

“I didn’t slip on it. I just saw it skating by like four times, from the third or fourth jump of the program,” she explained. “I’m like, oh gosh, there’s something there. But I didn’t know if I could stop to get it. Nor did I know if that was the right call, because once you interrupt the program, how does everyone feel about your program components, so I just left it.

“I’m not going to stand here and blame some stupid piece of plastic for my bad skate. I could have skated well anyways. I just have to learn how to focus a little more…. I wasn’t necessarily vying for a top three spot at any event last year and so I think I just need to learn how to compete as opposed to how to show up and skate. It’s a different skill.”

Schizas had started out well, executing two beautiful back-to-back combos (triple lutz-triple toe and double axel-triple toe-double toe). But it was on her next jump, the triple flip, that things started to go awry as she came out of it forward, a full half rotation short. She later bailed on a triple loop in a similar manner and fell.

“I have the technical skills. I just now need performance on demand kind of skills,” she said, noting she has a few weeks before her next event, the Grand Prix of Finland, where she hopes to have another opportunity to learn how to skate as a podium contender.

Brooke McIntosh and Benjamin Mimar held onto fourth place in their senior Grand Prix debut. They only had two errors in their free skate as Mimar doubled their planned side-by-side triple Salchows and then McIntosh fell on the landing of the throw triple loop.

They finished with a total score of 175.49 and experience to bring with them to their next Grand Prix at NHK Trophy in three weeks. 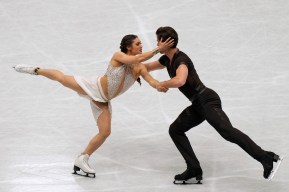