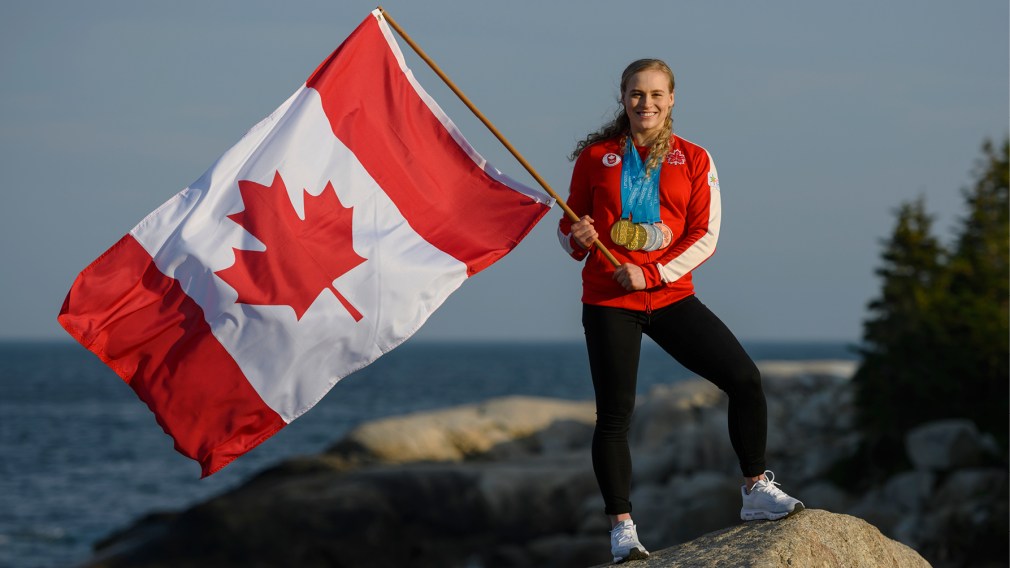 LIMA, PERU (August 11, 2019) – Becoming the first woman to win back-to-back individual all-around titles at the Pan American Games is one of the many records Ellie Black proudly  accomplished at Lima 2019. However, when she flew back home to Nova Scotia mid-Games following the artistic gymnastics competition, little did she know her proudest moment was still to come.

The Canadian Olympic Committee (COC) officially announced on Sunday that Black will lead the Canadian delegation as the Closing Ceremony flag bearer, capping off her exceptional run at Lima 2019.

“I feel incredibly honoured to have been selected as the flag bearer for the Lima 2019 Closing Ceremony,” said Black, who received the news from Team Canada’s Lima 2019 Chef de Mission Douglas Vandor. “It means so much to have this opportunity to hold our Canadian flag high and proud. The Canadian athletes’ performances were inspiring and so exciting to follow while in Lima and back at home. I’m very proud of everything we were able to achieve and I am so excited to lead this amazing team as we march into the stadium!”

“For me, this is so exciting for Canadian sport and Canadian gymnastics” said the 23-year-old. “To have great results and make history for my country, but most importantly inspiring others to dream big, go for your goals, and break down barriers. It’s special to share these results with my whole team!”

After a couple of short days rest, Black is already preparing for the next challenge. She was at the gym training and coaching at her home club Halifax ALTA when the call came from Vandor.

“Right now we are focused on training hard for the World Championships in October where we have a chance to qualify a full team for the Tokyo Olympics. Pan Ams was a great stepping stone to build on towards Worlds. After Worlds we will keep building our team for next summer!”

Team Canada’s Chef de Mission sees Black’s appointment as one of the many reasons to call Lima 2019 mission accomplished.

“What an incredible two weeks it’s been,” said Vandor. “There have been so many amazing performances by our Canadian athletes and so many special moments. One of those moments was when Ellie became the most decorated Canadian gymnast ever at a Pan American Games. With performances like that, along with the athletes and teams that secured spots for Tokyo 2020, Team Canada can be proud knowing our mission was accomplished.”

COC President Tricia Smith, who was elected to the Panam Sports Executive Committee while in Lima, was fully supportive of the flag bearer selection and was very proud of Team Canada’s run at Lima 2019.

“Ellie is a super role model, a team leader and an inspiration for the next generation of gymnasts,” said Smith. “An all round solid athlete, she has represented our country with incredible poise and grace, and will no doubt do the same as our nation’s Closing Ceremony flag bearer. Ellie and the rest of our athletes have made us proud here both on and off the field. And thanks to the people of Peru whose warm welcome have made this Games special.”

Below are the list of top highlights from Team Canada at the Lima 2019 Pan American Games:

RECORDS (IN CHRONOLOGICAL ORDER AS OF DAY 15):