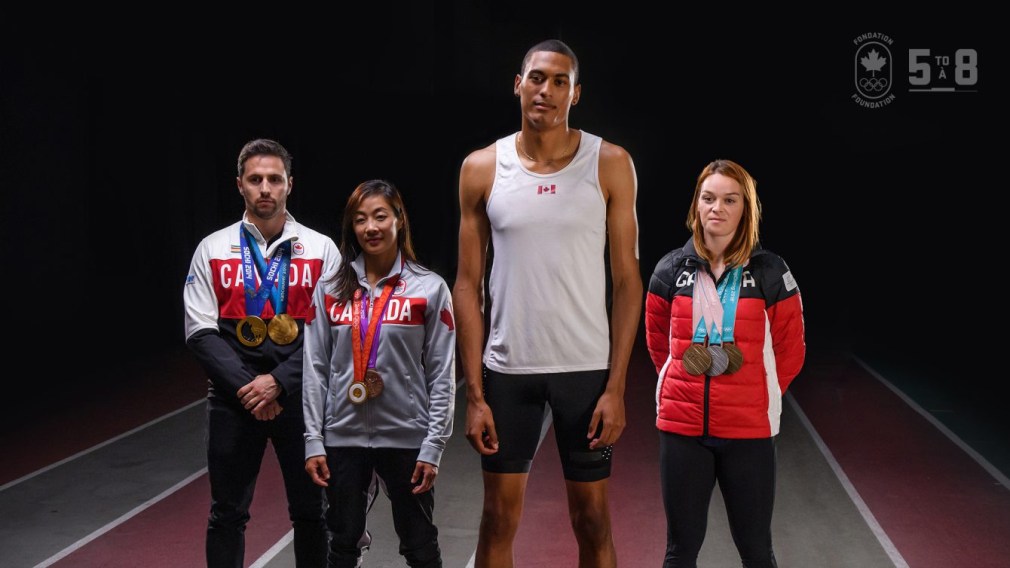 TORONTO (October 11, 2018) – Inspired by the generous donation of the David and Ruth Asper family, the Canadian Olympic Foundation launched 5to8, a fund matching program dedicated to raising money for the next generation of Canadian Olympians.

To launch the program and encourage other Canadians to give, David and Ruth Asper and their children Daniel, Rebecca and Max announced the largest individual donation to Olympic sport in Canadian history by a factor of ten, unveiling a transformative $2.5 million contribution to the Next Generation Initiative. The contribution will be supplemented through the Government of Canada’s fund matching program, doubling the value of the Asper donation.

Inspired by the contribution of the David and Ruth Asper family, 5to8 is a campaign dedicated to supporting Team Canada’s next generation of Olympians, who are between five and eight years from the podium and in the greatest need of funding to support their training and further development. Every donation given will be matched by the Federal Government on a dollar for dollar basis.

A campaign video was created to honour 5to8 and to inspire Canadians to give to our next generation of athletes in need. Starring Pierce LePage, a young, next generation athlete, who recently won silver in decathlon at the 2018 Commonwealth Games, the video shows the power of what it takes to be an Olympian and showcases Olympians Alexandre Bilodeau – two time Olympic champion in freestyle skiing at Vancouver 2010 and Sochi 2014, Kim Boutin – three-time Olympic medallist at PyeongChang 2018 and Carol Huynh – Olympic champion and bronze medallist at Beijing 2008 and London 2012 respectively.

The 5to8 campaign video illustrates the dedication, commitment and support required for an athlete to achieve their goal of competing for Team Canada on the Olympic stage. In addition to the support of fellow Olympians, athletes need all of Canada to support them on this journey to the podium.

“The 5to8 campaign is a way for our family and yours to come together and cheer for Canada. It is an honour for each of us to make this transformational contribution to our next generation of Olympic athletes. They’ve got the fire. Our collective support can help keep it burning.”

– Ruth Asper on behalf of her husband, David, and children Daniel, Rebecca and Max

“To win a medal for Canada at the Commonwealth Games was a dream come true. My eyes are firmly set on Tokyo 2020, and despite the financial burden, I am committed to my goal of representing Canada on the world’s greatest sporting stage. As a Next Generation athlete, I want to personally thank the Asper family for stepping up to showing such generous support for the Next Gen.”

“This is a game changing gift for sport philanthropy in Canada. Not only has the David and Ruth Asper family given an unprecedented donation to sport in Canada, they have helped to launch an initiative that will continue to help Canadian athletes become the best in the world for years to come.”

“This is not only a transformational gift for the Canadian Olympic Foundation, it is a leadership gift that will send a message to all community and business leaders across Canada. Our hope is that these leaders take notice and follow David and Ruth’s leadership and provide similar generosity to Canadian athletes. On behalf of the Canadian Olympic Foundation and all of our Olympic athletes, past, present and future, thank you to David and Ruth for this wonderful gift to Canada.”

5to8 is a powerful campaign created to help Team Canada’s next generation of Olympians. Our young athletes who are 5 to 8 years away from the podium are in the greatest need of funding. This not only helps catapult our future champions to the top of the podium, but it also secures Canada’s title as one of the top nations in the world for sport excellence.

Inspired by the David and Ruth Asper Family, 5to8 was created to encourage all Canadians to give to our Next Generation athletes in need. Every donation made to 5to8 will be doubled by the Government of Canada making every dollar worth twice as much to help support the Next Gen of Team Canada.

To learn more and to donate please go to 5to8.ca.

About the Canadian Olympic Foundation

Changing the world through the power of sport. It’s what we do.

The Canadian Olympic Foundation believes that everyone is capable of greatness – they just need to be given the opportunity. As the official charitable organization of Team Canada, it’s our responsibility to create that opportunity for all of our Canadian athletes.

We raise funds to support the Canadian Olympic Team, next generation, high-performance athletes, and the Canadian sport system. Daily training, year-round coaching, proper nutrition, national and international competitions, and state-of-the-art equipment are all essential in propelling our athletes to the top of the podium.

With the support of our donors, we enable Canadians and Canadian athletes to strive for greatness. We empower our country to come together to do something remarkable: to bring the world to its feet.