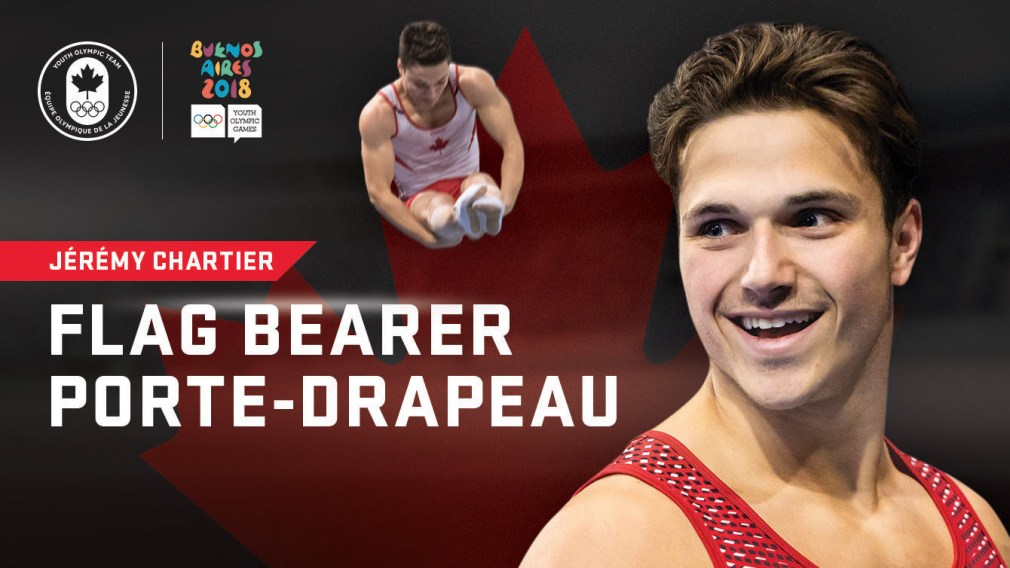 As flag bearer, Chartier will lead a team of 72 athletes into the Opening Ceremony which will be held at the iconic Buenos Aires Obelisk on Saturday, October 6, 2018. Chartier becomes the second consecutive trampolinist to lead Team Canada into a summer Olympic competition, following in the footsteps of two-time Olympic champion Rosie MacLennan at Rio 2016.

(Update: Team Canada has been reallocated an additional boxing quota by AIBA to bring the total athlete count to 72.)

Chartier, a Montreal native, has been a top junior male athlete in the world for the last four years, winning World Age Group titles in 2015 and 2017. So far in 2018, he has been victorious at both the Canadian Junior Championships and the Junior Pan American Championships. His pursuit of excellence extends off the field of play, reflected in his accomplishments as a leader in his community. Chartier actively promotes grassroot-level sport to young athletes by volunteering his time to help organize competitions and demonstrations.

Buenos Aires 2018, to be held October 6-18, will celebrate sport and diversity. It will be the first ever Olympic competition to feature total gender equality, hosting 1999 male and female athletes from 206 countries.

The Youth Olympic Games is an international, multi-sport event for young athletes aged 15-18 with an educative and cultural nature that aims to foster the Olympic values in youth.

“It is a great honor to carry my beloved country’s flag into this Olympic competition. Some stress and responsibility come with this gift, but it is with a big smile that I will walk with my companions on October 6th, honoured to be behind my flag and proud of our great nation.”

“Jérémy is an incredible young man who at just 17 years old has demonstrated what it truly means to be Olympic both in competition and in the community. His passion to promote fair play and equality in sport has turned him into a young role model for the next generation of Canadian athletes, all of which reflects what the Youth Olympic Games stands for. On behalf of all of us at Team Canada, congratulations Jérémy!”