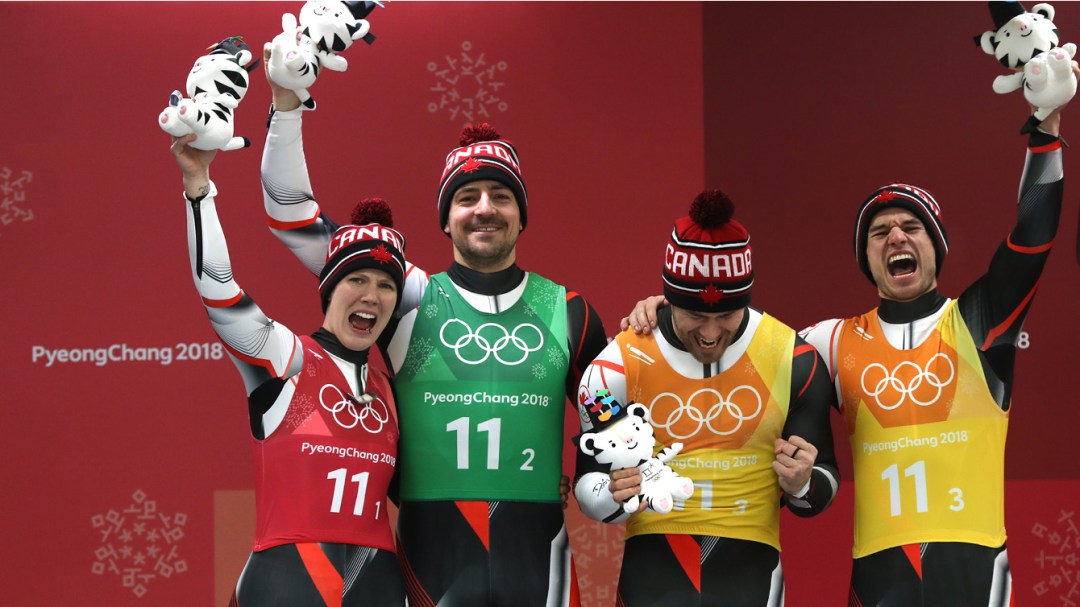 PYEONGCHANG (February 15, 2018) – Here is what you need to know about Team Canada at the end of Day 6 at the Olympic Winter Games PyeongChang 2018:

“We’ve been working this past quad with the heartbreak of Sochi, and to finally capitalize not only bronze but silver – amazing.”

On crossing the line:

“Anticipation. There’s a break between punching the clock at the end there and knowing where you finish, and as soon as I saw my teammates celebrating it was just like the biggest weight off my shoulders, especially after a long four years.”

On the moment the double crossed the line:

“That was the moment that I think the four of us were just overwhelmed. We each did our job, we each put a great run down. I think we knew we had a chance to be up there. It’s amazing. It’s the moment that we were all dreaming of and wanting forever.”

On training for the event:

“We basically committed to the four years right after Sochi. Sam and I definitely needed some other focuses to be able to come back here as fresh as possible and with as much motivation as possible. To pull it through with these guys is so incredible. This is the best.”

“It’s going to take a while for all this to sink in. It’s hard to say what’s going through my mind. It’s been very emotional. It’s the biggest stage I’ve ever been on and to win here is the highest you can get.”

On how hard he has worked:

“We’ve worked towards this competition for so long with my team. I’m just so proud of them that we made it happen today. It’s amazing.”

On his family and friends:

“They were already so proud when I won the 5000m silver. I really wanted to win a gold medal for them. But for them, they’ll always love me. It’s a comforting feeling having them here.”

On skating four programmes this week and taking bronze:

“We were really, really well trained when we came here. I think we are at the peak of our mental and physical state right now as the elderly skaters. I don’t think we could be any more prepared. Those four programmes this week are exactly along the lines of what we do in training every week. I think we paced our energy very well throughout the week so that we had enough in the tank to give it everything we had today.”

On becoming the first skater to land a quad throw Salchow at the Olympic Games:

“I didn’t even know until I had a message from Isabelle BRASSEUR (CAN, 1992 and 1994 Olympic pairs bronze medallist). She said, ‘You are the first girl to land a throw quad at the Olympics’. I couldn’t believe there is a skating fact I didn’t know, and now I know. I had a little bit of a mishap on the Lutz but the quad throw was going so well in training. I didn’t even question it and I said, ‘No, you are landing this.’ I wasn’t surprised. I said, ‘Now I have to go on to the next thing.’”

On winning the bronze medal:

“This is better than anything we could have imagined. This competition, there were so many good pairs that anything could have happened. So for us to go out and lay it down, it meant so much to us.”

On their upcoming retirement:

“That was a better way to end, with an awesome long programme. A bronze medal is more than I could ever have hoped for.”