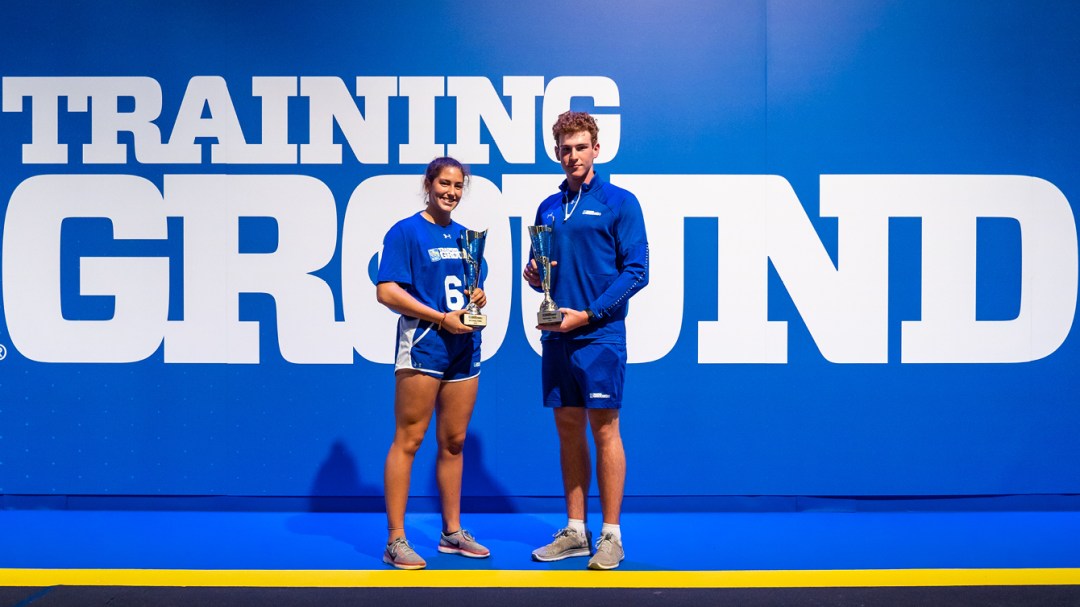 TORONTO (January 14, 2020) — While Canadian Olympians prepare to take the world’s biggest sporting stage at the Olympic Games in Tokyo, RBC Training Ground will once again be searching the country for the next generation of Olympic talent.

Entering its fifth year, RBC Training Ground is a nation-wide talent identification and athlete-funding program dedicated to finding and supporting the next generation of Canadian Olympians. Since its inception in 2016, the program has tested 8,000 athletes at more than 100 free local events across Canada. At each event participants perform speed, strength, power, and endurance benchmark testing in front of National Sport Organizations.

In 2020, RBC Training Ground will hold events on centrally located university campuses in eight provinces, culminating with a national final to be held in Winnipeg, Manitoba and timed with the province’s 150th anniversary. The second-ever national final will bring together the top 100 high-potential athletes from across the country to compete for funding and a spot on one of nine partner sport organizations’ teams. Up to 30 high-performing athletes will be selected as RBC Future Olympians to receive funding, mentorship, and other resources as they pursue their Olympic Games dreams.

Several athletes who were discovered at previous RBC Training Ground events and supported as RBC Future Olympians are now emerging as Tokyo 2020 medal hopefuls. World record-setting track cyclist and Tokyo 2020 medal hopeful Kelsey Mitchell was a university soccer player when she was discovered at an RBC Training Ground event in 2017.

“At RBC, we are proud to support Canadian Olympic athletes at every stage of their careers. RBC Training Ground is bridging the gap between next-generation talent and Olympic medallists, and we will experience the results first-hand as we cheer on graduates of our program at the 2020 Games. We look forward to continuing to work with our partners at the COC, COPSIN and CBC Sports for the fifth year of RBC Training Ground to unlock the potential of the next generation of Olympians.”

“Year five represents an important milestone for the RBC Training Ground program. This is the year that graduates of the program make their Olympic dreams come true. I encourage all participants this year to take their tests to heart as the opportunity to represent Team Canada on the world’s biggest sporting stage can be made a reality.”

“CBC Sports is proud to partner on this special initiative which allows us to engage with amazing young Canadians across the country. We look forward to shining a spotlight on recent graduates of the program at the Olympic Games in Tokyo, and will continue to share the journeys of RBC Training Ground hopefuls as they strive to achieve their own dreams of reaching the podium, through our digital platforms and weekly broadcast of Road to the Olympic Games.”

“The most exciting aspect of the RBC Training Ground program is that we are seeing athletes emerging as national and international performers in sports they may never have considered had it not been for the program. Athletes like Kelsey Mitchell (Cycling), Gabby Smith and Avalon Wasteneys (Rowing), and Marion Thenault (Freestyle Skiing) are now demonstrating with evidence that this program can provide athletes with new and exciting opportunities in high performance sport. The strength of collaboration across the nine partner NSOs, and the Canadian Olympic and Paralympic Sport Institute Network, has definitely been enhanced through this program, creating a much more aligned sport system in Canada.”

“Ski Jumping Canada and Nordic Combined Ski Canada are thrilled to be part of the RBC Training Ground program as this is an integral development component of identifying much-needed high calibre athletes for our exciting sports. Many opportunities are available for our athletes to advance to the National Team level with higher than average exposure to Olympic qualifications and participation.”

Royal Bank of Canada is a global financial institution with a purpose-driven, principles-led approach to delivering leading performance. Our success comes from the 85,000+ employees who bring our vision, values and strategy to life so we can help our clients thrive and communities prosper. As Canada’s biggest bank, and one of the largest in the world based on market capitalization, we have a diversified business model with a focus on innovation and providing exceptional experiences to 17 million clients in Canada, the U.S. and 34 other countries. Learn more at rbc.com.

The Canadian Olympic Committee leads the achievement of Team Canada’s podium success and advances Olympic values in Canada. Independent and predominantly privately funded, the Canadian Olympic Committee delivers resources that Canada’s elite athletes need to perform at their best and give their everything every day. By sharing our athletes’ stories, we inspire all Canadians through the power of sport: 24 hours a day, 7 days a week, 365 days a year.

CBC/Radio-Canada is Canada’s Olympic Network through 2024 and Canada’s Paralympic Network through 2020. The national public broadcaster is committed to showcasing Canadian and international athletes and sports across all platforms under the CBC Sports and Hockey Night in Canada brands, including on television, online at cbcsports.ca and via the CBC Sports app for iOS and Android devices. CBC Sports prides itself on telling the story of the high-performance athlete’s journey every step of the way, ensuring Canadians always know the people who represent them before they see them atop the podium.