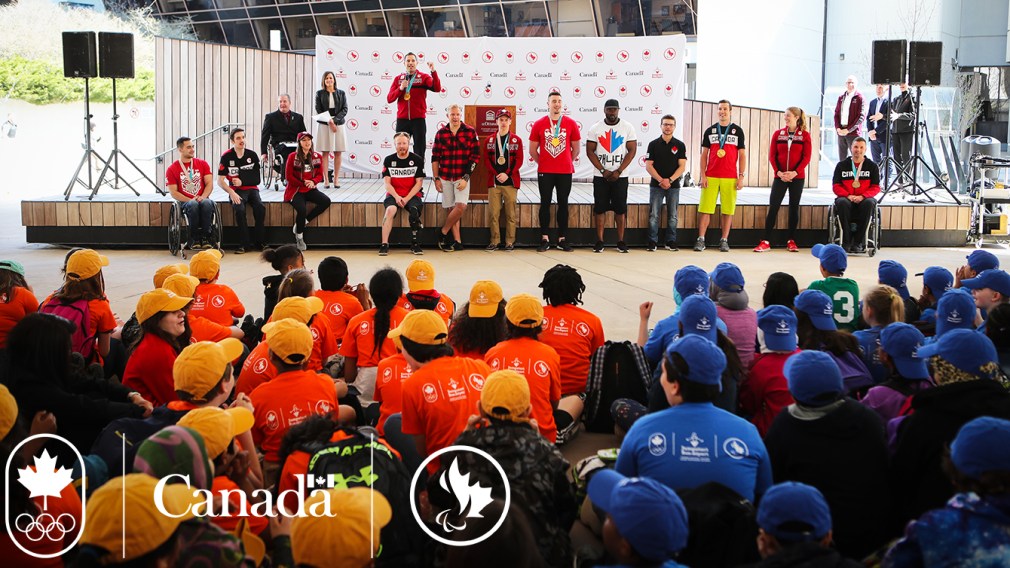 Note to media: Photos from the Team Canada Jumpstart Games are available for editorial use here. Photo credit available in the cutlines.

OTTAWA (May 8, 2018) – With the help of Canadian PyeongChang 2018 athletes and the local sport community, the second ever Team Canada Jumpstart Games was successfully held at the University of Ottawa as part of a two-day Team Canada Celebration event.

In partnership with the Canadian Olympic Committee, Canadian Paralympic Committee,  and the Government of Canada, Team Canada Celebration will bring PyeongChang 2018 Olympians and Paralympians together in Ottawa. Working with Canadian Tire Jumpstart Charities, the Team Canada Jumpstart Games were held to kick off the festivities and create a memorable day of play for kids who may not have opportunities to participate in sport.

Supporting the Games in Ottawa were thirteen Canadian PyeongChang 2018 Olympic and Paralympic athletes who, alongside 300 kids, participated at sport stations including snowboard, curling and Para ice hockey.

“Jumpstart provides a fantastic opportunity for kids of all backgrounds and abilities to connect with athletes,” said four-time Olympic medallist, Denny Morrison. “One of the best parts of being an Olympian or Paralympian is the ability to inspire the next generation, and today’s event is an amazing opportunity for all of us to do just that.”

“Participating in sport can be life-changing and it all starts with the opportunity to try,” said Mark Ideson, 2014 Paralympic champion and 2018 bronze medallist in wheelchair curling. “Jumpstart Games does great work providing kids of all abilities with a chance to play and it is always special as a Paralympian or Olympian to help inspire the next generation and share the joy of sport.”

Canadian Tire Jumpstart Charities is a national charity dedicated to helping kids overcome financial and accessibility barriers to sport and recreation in order to provide inclusive play for all. To date, the Charity has disbursed $4.75 million to help 54,000 kids in Ottawa.

“At Jumpstart, we understand that for kids, the opportunity to play is about more than getting active: sport fosters valuable life skills, a notion embodied by Canada’s Olympians and Paralympians. We are thrilled to host a Jumpstart Games in Ottawa, providing local kids the chance to play alongside some of Canada’s best athletes, and hopefully, be inspired to follow their own sporting dreams,” said Scott Fraser, President, Canadian Tire Jumpstart Charities.

The Games are part of a two-day Team Canada Celebration held in Ottawa for athletes, guides and coaches who represented Canada at the Olympic and Paralympic Winter Games PyeongChang 2018. The celebration includes visits to Rideau Hall and Parliament Hill hosted by the Government of Canada.

“Since it began, Jumpstart has made it possible for more than 1.5 million children from families in financial need to participate in organized sports,” said the Honourable Kirsty Duncan, Minister of Science and Minister of Sport and Persons with Disabilities. “That’s an incredible achievement, and one the Government of Canada is proud to have been a part of—because we too believe that all Canadians should be able to get active and stay active regardless of ability.”