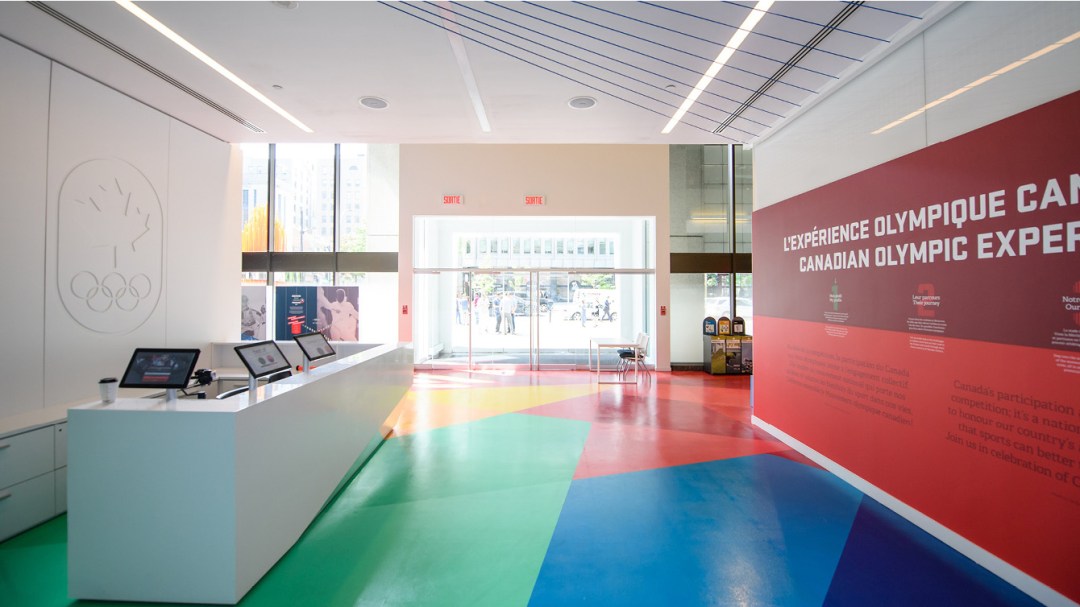 The Canadian Olympic Experience: A complete immersion into the inspiring universe of Olympic athletes

Download digital assets of the Canadian Olympic Experience for editorial use here.

MONTREAL (JUNE 18, 2018) – The Olympic dream comes to life in a new exhibit called: the “Canadian Olympic Experience.” Located inside Canadian Olympic House in Montreal, this interactive journey allows the general public to experience a complete immersion into the world of Canadian Olympic athletes.

Through a simulation, visitors will be able to feel what it’s like to ski down a freestyle moguls run like Mikaël Kingsbury, measure the speed of their start on a track with the help of a virtual Bruny Surin, as well as experience the excitement of the Opening Ceremony at an Olympic Games.

The Canadian Olympic Committee (COC) will officially open the doors of the “Canadian Olympic Experience” on Wednesday, June 20, 2018. Visitors will be invited to discover an exhibit that’s divided into three different zones where they can immerse themselves in the Canadian Olympian experience. This interactive and educational technological experience was both conceived and produced by Montreal firm GSM Project and takes around 90 minutes.

“Our nation’s Olympic history now has a home in the heart of Montreal – Canada’s first Olympic host city – which represents an incredible showcase for our athletes and our rich sports history,” said Canadian Olympic Committee Executive Director, Sport, Eric Myles. “This destination represents a lasting symbol of the strong presence and involvement of the Olympic Movement in Quebec and across Canada. We are proud to unveil this project which features over 200 Canadian athletes.”

The first zone of the experience allows visitors to discover their athletic and sports profile. Next, your journey takes you through interactive experiences in Olympic disciplines like bobsleigh, track and field, fencing and freestyle skiing.

In the second zone, visitors discover over a century of stories behind the unforgettable performances by Canadian athletes via images, video and audio. For example, we get to relive the behind-the-scenes challenges overcome by skiing legend Nancy Greene on her road to glory at the 1968 Olympic Winter Games in Grenoble.

The third zone is in the Salle Lausanne where an exhilarating visual experience awaits its visitors with a flurry of moments of glory in Canadian Olympic history. Its panoramic screen and state-of-the-art technology transport visitors into an Olympic Games Opening Ceremony with all the excitement and intensity of the moment. Over 200 Canadian athletes are featured in this breathtaking montage.

Located in the ground floor of the offices of the COC in downtown Montreal at the corner of Rene-Levesque and Beaver Hall, the Canadian Olympic Experience will open its doors to the public on Wednesday, June 20 at 10 a.m. The opening hours will be from Wednesday to Sunday, from 10 a.m. to 6 p.m.

Admission fees are between $9 and $13. For more information or to purchase tickets, visit Ticketpro.ca.

GSM Project specializes in the creation and production of visitor experiences. Based in Montreal, Canada, since its founding in 1958, the company also has offices in Dubai and Singapore and collaborates with a wide range of clients all over the world to create immersive, educational, and fun experiences. Over the course of its long history, GSM Project has designed exhibitions for major museums across the globe, such as the National Museum of Singapore, the Canadian History Hall in Ottawa (Canada), the Anchorage Museum (Alaska, United States), and the Museum of Civilization in Quebec City (Canada). The Canadian Olympic Committee’s Experience project was the collaborative effort with XYZ Cultural Technology for the audiovisual and interactivity aspects. For more information, go to www.gsmproject.com.