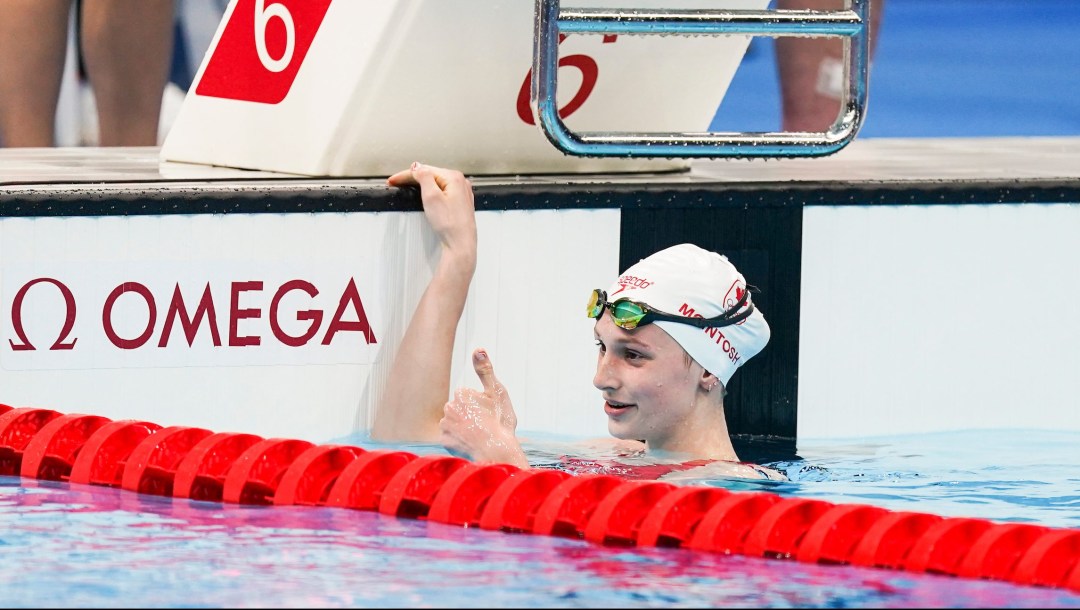 At just 14-years-old, Summer McIntosh was the youngest athlete on all of Team Canada at Tokyo 2020. She finished fourth individually in the 400m freestyle while lowering the Canadian record to 4:02.42. She was also the leadoff swimmer for the 4x200m freestyle relay that placed fourth. She came one spot shy of advancing to the 200m freestyle final and also competed in the 800m freestyle. McIntosh was a second-generation Olympian, following her mother Jill (née Horstead) who competed in swimming at Los Angeles 1984.

In her first appearance at the FINA World Championships in 2022, McIntosh won gold in 200m butterfly (2:05.20) and 400m individual medley (4:32.04) while breaking the world junior record in both. She was the first Canadian swimmer to ever win two gold medals at a FINA Worlds. She also captured silver in the 400m freestyle and bronze in the 4x200m freestyle relay, breaking the world junior record for her leadoff leg in the latter.

At the Commonwealth Games a month later, McIntosh won six medals to be Canada’s most decorated athlete in Birmingham. Her haul included gold medals in the 200m (2:08.70) and 400m (4:29.01) IMs as well as silver in the 400m freestyle to go with three relay medals: 4x200m freestyle silver, 4x100m medley silver, 4x100m freestyle bronze. She lowered the world junior records in both IM events.

Over the course of her young career, McIntosh has broken more than 50 Canadian Age Group records. She became a contender for the Tokyo 2020 team in May 2021 when she went under the Olympic ‘A’ qualification standard in the 400m freestyle. She took more than 10 seconds off her personal best and eight seconds off the previous national record for 13-14-year-old women in setting the new mark at 4:05.13.

McIntosh secured her spot on the 2020 Olympic Team by winning the 200m freestyle at the Canadian Olympic Trials in late June, beating Penny Oleksiak to the wall. In the process, she lowered her own 13-14 age group national record to 1:56.19. A day later she won the 800m freestyle to qualify for her second event at Tokyo.

In January 2019, McIntosh wiped a 45-year-old mark out of the Canadian record books as she lowered the 800m freestyle record for the 11-12 age group to 9:07.16. Before the season was over, she dropped that mark again to 8:51.71, taking 20 seconds off the original record while competing at the senior Canadian Championships. Then-aged 12, she won bronze in the 800m freestyle and the 400m IM.

A Little More About Summer

Getting into the Sport: Started swimming competitively as an 8-year-old in 2014… Has wanted to make the Olympic team since watching the 2016 Olympic Trials in person and being on the pool deck to fist pump all the Canadian swimmers named to the Rio 2016 team… Outside Interests: Enjoys creating TikToks with her sister and doing water sports such as wakeboarding, water skiing, surfing, and tubing… Odds and Ends: Older sister Brooke competed in pairs figure skating at the Lausanne 2020 Youth Olympic Games… Inspired by Michael Phelps for doing the hard work needed to become the best… Named one of her two cats Mikey after Phelps because he loves water… During the COVID-19 pandemic received video messages from Spanish Olympic champion Mireira Belmonte Garcia to encourage her to keep working on her butterfly sets… Favourite motto: “Work the hardest and have the most fun and consistently be willing to do what others are not willing to do”…