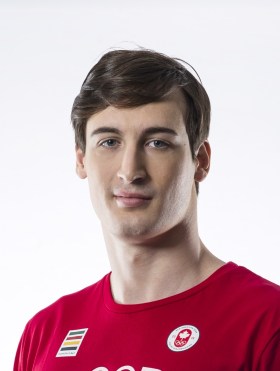 Alex Loginov was named to the TORONTO 2015 Pan Am Games team after he finished second in the 50m freestyle at the 2015 Canadian Trials. Earlier in the year he helped the UBC Thunderbirds win the CIS Championship, tying for the gold medal in the 50m freestyle with fellow Pan Am Games team member Yuri Kisil. It was his second CIS team title with the Thunderbirds, who previously won in 2012.

Family: Parents Yuriy Loginov and Olena Loginova… They’ve been his biggest inspiration because they always do what is needed to be done, no matter how hard it is… Getting into the Sport: Began swimming at age 10 when his parents signed him up for lessons… Competed in his first meet at age 12 and did not understand the point of warming up before his race… At age 14 his coach he suggested he try other strokes but when he tried backstroke he hit his hand on the wall and broke his finger… Outside Interests: Studying International Relations at the University of British Columbia (expected graduation June 2016)… Would like to get involved in the international community in sports or diplomacy… Enjoys playing video games like Starcraft and Call of Duty, tennis, reading… Odds and Ends: Nickname: Logo… Wants people to know that even though he specializes in the 50m, he is capable of swimming more that than one length of the pool without stopping…

Distance freestyler Kier Maitland has been on the national swimming scene for a decade, having been named Rookie of the...