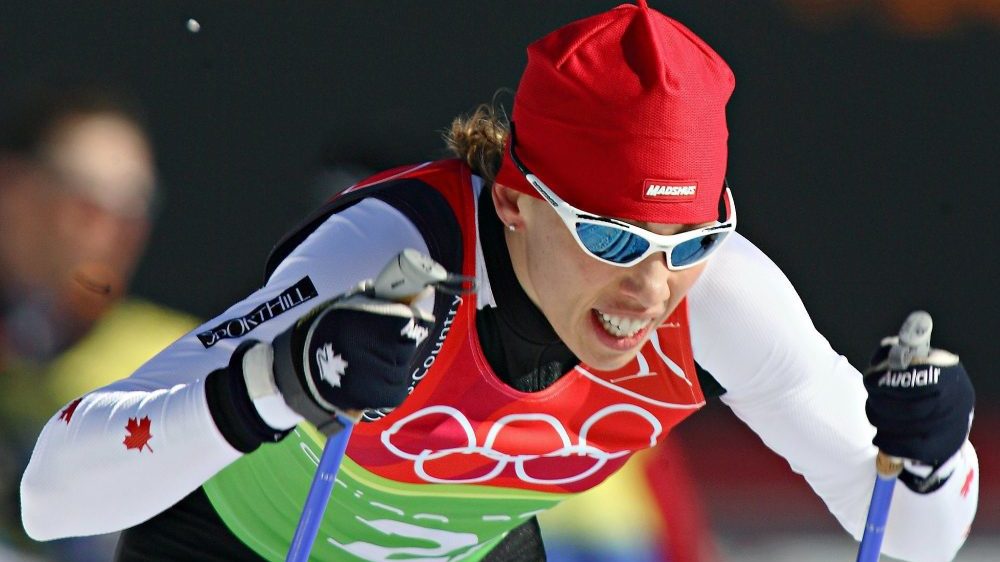 Canadian Beckie Scott made her first of three Olympic appearances at Nagano 1998 where she skied in five races, with her best finish of 16th as a member of the 4x5km relay team. At Salt Lake City 2002, Scott’s first event was the 10km in which she initially placed sixth. Three days later, after the first day of the combined pursuit, Scott was sitting in sixth after the classical leg and found herself in a fight for bronze in the freestyle leg. She held off a challenge in the last 100m to finish one-tenth of a second ahead of the Czech skier and win the bronze medal. Scott, who had never won a major international race, had become the first North American woman to win an Olympic medal of any colour in cross-country skiing. The following year, in 2003, it was revealed that the original pursuit gold medallist was disqualified for a positive drug test and Scott was elevated to silver. A few months later, the new gold medallist was found to have tested positive and disqualified. More than two-and-a-half years after she skied the race, Scott was awarded what was rightfully hers in June 2004, receiving the pursuit Olympic gold medal on the steps of Vancouver Art Gallery. The disqualifications also moved Scott from sixth to fourth in the 10km. In her final Olympic Games at Turin 2006, Scott won a silver medal in the team sprint with Sara Renner and had three other impressive finishes of fourth in the sprint, sixth in the 15km skiathlon and 10th in the 4x5km relay. She retired after Turin 2006 as Canada’s most decorated cross-country skier, having ended her Olympic career with one gold and one silver medal.

Scott began cross-country skiing at the age of five and was racing by seven. A graduate of the Jackrabbit Program, Scott joined the national team in 1994. Throughout her skiing career, Scott remained resolute in her plea for drug-free sport and once retired became a leading international voice for clean sport. She has also been an Olympic broadcast analyst and honorary Doctor of Laws degree recipient from the University of Alberta.

Scott joined the World Anti-Doping Agency’s (WADA) athlete committee in 2005, becoming an influential lobbyist, and in 2012 was appointed to their executive committee, though she resigned from the compliance and review committee in 2018 over the reinstatement of Russia’s anti-doping agency (RUSADA). Elected to the IOC Athletes’ Commission in 2006 for an eight-year term, Scott was a member of the IOC’s Coordination for the Youth Olympic Winter Games for Innsbruck 2012 and Olympic Winter Games at Sochi 2014. She also serves on the board of the Canadian Centre for Ethics in Sport.

A passionate volunteer, Scott donated her time to many charities including UNICEF and Right to Play. She has a Bachelor of Arts in English from the University of Waterloo. Settling in Canmore, Alberta, Scott married American cross-country skier and three-time Olympian Justin Wadsworth (who became the head coach of the Canadian team) and had two children.

Scott has twice received the John Semmelink Memorial Award given to a Canadian skier “through sportsmanship, conduct, and ability, best represents Canada in international competition.” She has been inducted into the Alberta Sports (2005), Canada’s Sports (2007), Canadian Ski (2010) and Canadian Olympic (2012) Halls of Fame, and in 2018 became an Officer of the Order of Canada, the third-highest level of the Order.