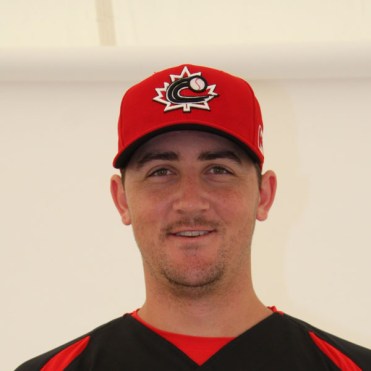 Brock Kjeldgaard competed with Team Canada twice in 2011, helping the team win gold at the Pan Am Games in Guadalajara and bronze at the Baseball World Cup. In 2012 he and the rest of the Pan Am Games team were inducted to the Canadian Baseball Hall of Fame. Kjeldgaard was selected in the 34th round of the 2005 MLB Draft by the Milwaukee Brewers. He has since bounced around the minor leagues, playing at the AA level in 2013 and 2014 with the Huntsville Stars. He currently plays for the Sioux City Explorers of the American Association of Independent Professional Baseball.

Kyle Lotzkar had a busy year with Team Canada in 2011, winning a gold medal at the Pan Am Games...

Skyler Stromsmoe competed with Team Canada at both the 2011 Pan Am Games and 2011 Baseball World Cup, winning gold...