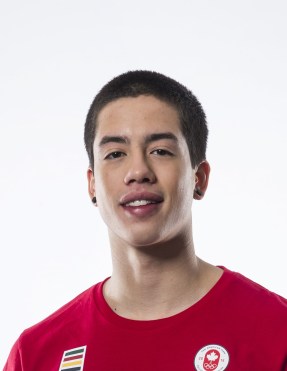 Evan White qualified for his first senior national team in 2014 when he nearly broke the Canadian record in the 200m IM at the trials to select the teams for the Commonwealth Games and Pan Pacific Championships. He ended up as the youngest male on both teams, but was subsequently unable to compete at the Pan Pacs due to injury. In Glasgow, however, he was part of two top-five relay teams and came just short of advancing to the 200m IM final. White was named to his first junior national team in 2012 when he competed at the Junior Pan Pacific Championships. In 2013 he was a double medallist in the individual medleys at the Australian Youth Olympic Festival. He went on to win his first senior international medal when he took bronze in the 200m IM at the Canet stop of the Mare Nostrum circuit. He then attended the FINA World Junior Championships where he placed fifth in the 200m IM and just missed a medal in the 4x100m freestyle relay. In his first year competing for the University of Michigan Wolverines, White was named 2014-15 Big Ten Co-Freshman of the Year and helped the men’s team to a third place finish at the NCAA Championships. He just missed the podium with a fourth place finish in the 200m IM at the 2015 Pan Am Games.

Family: Parents Tim and Teresa White… Older brothers Caleb and David… Getting into the Sport: Began swimming at age 8… At his first meet he cried because he thought swimming 25 metres meant 25 lengths of the pool… Outside Interests: Sophomore at University of Michigan (Kinesiology, majoring in Movement Science)… Enjoys watching movies, reading, and camping…