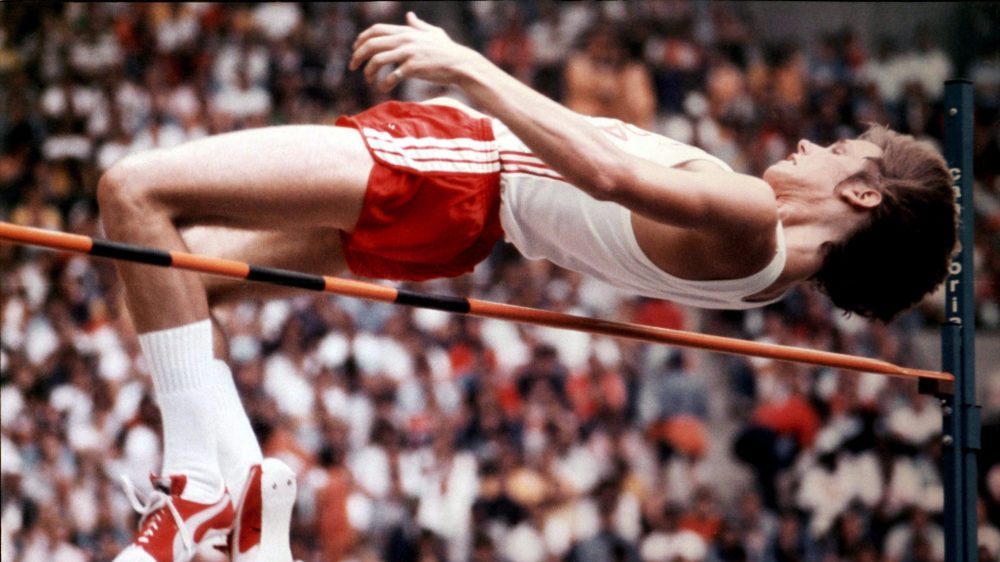 By the final full day of competition at Montréal 1976, Canada had yet to win a gold medal and Greg Joy was the nation’s last hope. In the men’s high jump final, Joy found himself in the hunt for an Olympic title as driving rain poured down onto the high jump apron. When 20-year-old Joy cleared 2.23m (7’4”) he had beaten world record holder American Dwight Stones, who had no love lost with the Canadian fans. The home crowd of 70,000 went crazy knowing Joy had the silver for sure, and still had a chance at gold, which Joy had predicted would be won with a 2.25m jump. But Joy failed at 2.25m and won the silver medal still becoming a national hero. It was Canada’s first Olympic high jump medal since Duncan McNaughton’s gold at Los Angeles 1932. The moment reverberated with Canadians and was immortalized in CBC’s “O Canada” nightly sign-off, leading Joy to say, “Every day of my life someone mentions that jump — and I finished second!” Joy then carried Canada’s flag in the Closing Ceremony.

Two years later after his Olympic silver medal in 1978, Joy set a world indoor record of 2.31m (7’7”) in Maryland, USA, making him one of three Canadians in track and field to have held a world record and won an Olympic medal (Donovan Bailey and Harry Jerome are the others.)

Born in the USA to Canadian parents, Joy lived in Vancouver, British Columbia from age nine to 17. His journey started at the 1973 Canada Games in New Westminster/Burnaby where he won the high jump. Joy was a freshman at the University of Texas-El Paso when he won the 1975 NCAA indoor title. A two-time Canadian champion from 1976-1978, Joy tied for bronze at the 1976 NCAA Championships and won silver at the 1978 Commonwealth Games.

In 2002, Joy married four-time, two-sport Olympian Sue Holloway who made Olympic history in 1976 when she became the first woman and first Canadian to compete in both the Summer (canoe) and Winter (cross country skiing) Olympic Games in the same year. Joy worked in sports administration and local charities, ran in a political election, and with his wife operated a motivational speaker’s bureau, and had two daughters who excelled in sport.