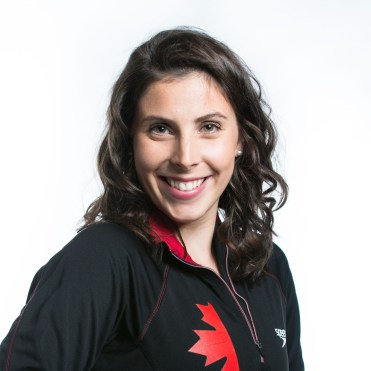 Jade Dusablon earned a spot on her first senior national team in 2014 when she was the top Canadian woman at the Fran Crippen Cup. Her fourth place finish in the 10km marathon gave her a ticket to the Pan Pacific Championships, but she was unable to compete after the open water events were rescheduled and relocated. She was no rookie to international competition, however, winning 10km silver at the 2011 FINA World Cup stop in Lac Mégantic and adding a 10km silver in 2013 at the World Cup in Lac St-Jean. In 2012 Dusablon competed at the inaugural FINA World Junior Open Water Championships in Welland, Ontario where she posted a top-15 finish. In 2013 she swam to a top-10 result in the 10km at the Universiade and also competed at the Canada Games in Sherbrooke where she won silver in the 5km open water event and posted a top-five finish in the 1500m freestyle in the pool.

Family: Parents Sylvain Dusablon and Sylvie Servant… Getting into the Sport: Started swimming lessons at age 5 because her mother did not want her to share her fear of water… Started competing at age 6… Outside Interests: Studied national sciences at Cégep de Sainte-Foy… Completed first year of physiotherapy studies at Université du Montréal… Odds and Ends: Inspired by 2010 Olympic bronze medallist figure skater Joannie Rochette for her strength of character…

In her Olympic debut, Zsofia Balazs competed as a 22-year-old and finished in 18th place in the 10km open-water Swimming…