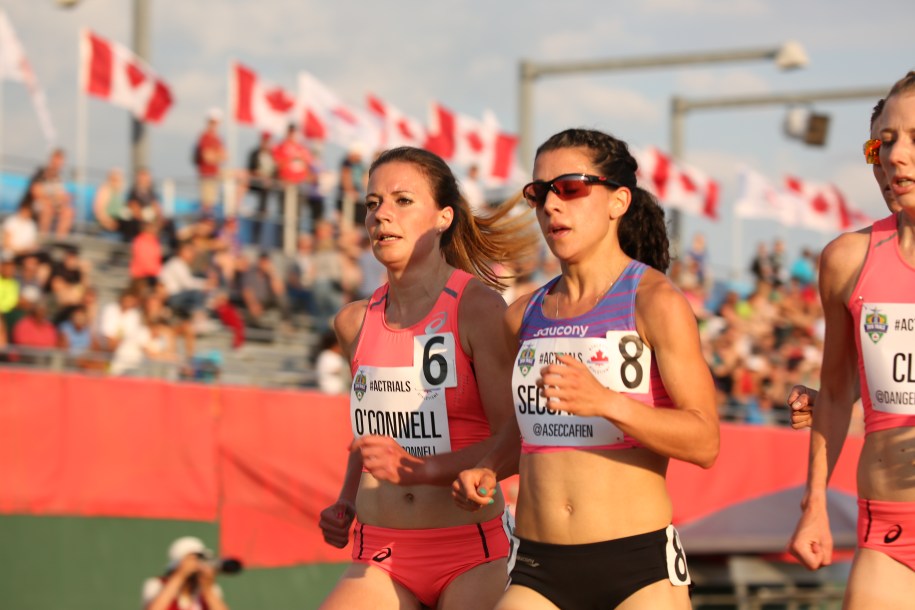 With a high fitness level thanks to her dance background, Jessica O’Connell stood on the podium at her first ever junior nationals. She had always been infatuated by the Olympic Games, so those results made her realize that with a little hard work, competing for Team Canada was possible. She represented Canada at the 2008 IAAF World Junior Championships. After running a personal best 15:13.21 in the 5000m in May 2014, she went on to finish 10th in the event at the Commonwealth Games in Glasgow. She then improved upon that personal best in May 2015, running 15:06.44 to make her the fourth-fastest Canadian all-time in the 5000m. But while enjoying the best season of her career, she suffered acute Achilles tendonitis during an easy practice in June 2015. That forced her to withdraw from the Canadian championships and what was to be her debut at the IAAF World Championships. She was able to compete at the Pan Am Games in Toronto, which she entered as the top-ranked runner in the 5000m, but the injury had forced her to change her training and she couldn’t race at her full potential. In her longest run in three weeks, she finished sixth, but was still the highest-placing Canadian and proud of her fight. It took her five months to return to full training.  In 2016, O’Connell achieved a major career highlight of competing at the Olympic Games, finishing 23rd in the 5000m.

A LITTLE MORE ABOUT JESSICA

Getting into the Sport: Grew up Irish dancing and loved competing, which motivated her to practice and improve… Transitioned into track and field in grade 11… Ran track and cross-country casually in high school until a club coach invited her to practice after a meet… Outside Interests: Completed Master’s degree in Exercise Physiology at the University of Calgary in December 2015 after her undergraduate degree at West Virginia University… Works as a research assistant on a variety of kinesiology projects at the University of Calgary and as a fitness instructor… Enjoys baking, listening to local music and taking in local events in Calgary,  hiking, exploring the mountains… Athlete ambassador for Fast and Female… Odds and Ends: Nicknames: Jess, J-Conn… Considers it good luck when her competition number has repeating digits (ie: 393, 522, etc)… Likes to have ice cream the day before a race… Favourite quote: “It always seems impossible until it’s done.” – Nelson Mandela…

Maria Bernard has represented Canada twice at the IAAF World Cross Country Championships. She competed in the junior race in...