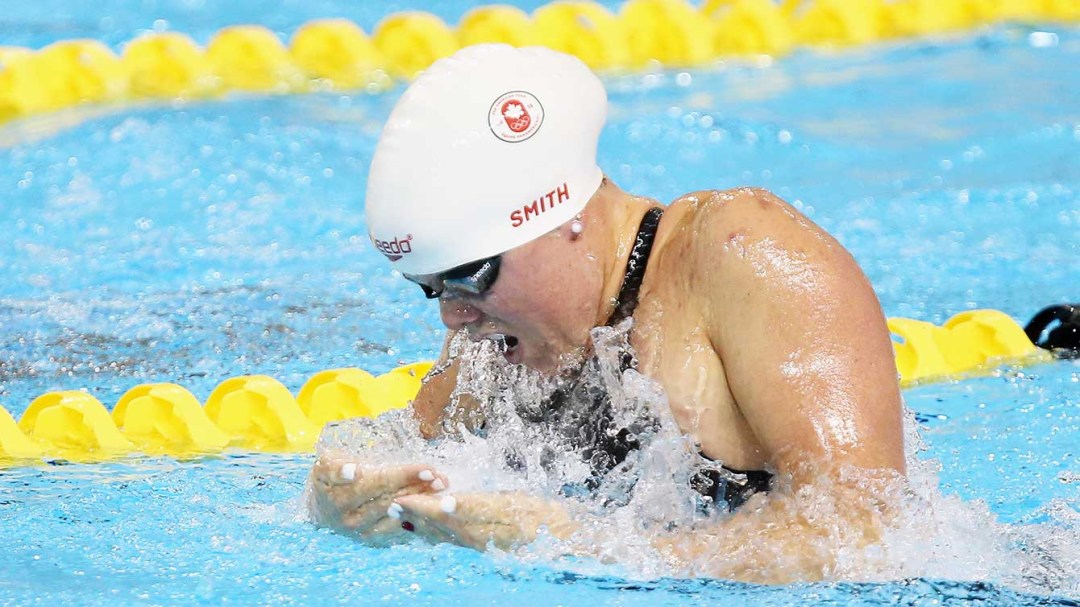 When she was 12, Kierra Smith met Annamay Pierse, who asked about Smith’s times in their shared event, the 200m breaststroke, and cheered her on in competition. That encouragement from the Canadian who went on to set the world record made Smith want to represent Canada herself. She got that chance in 2011 at the Pan Am Games in Guadalajara and came home with a silver medal from the 4x100m medley relay.

Smith qualified for her first senior national team in 2014 which allowed her to compete at the Commonwealth Games and Pan Pacific Championships. She just missed the podium in her individual specialty, finishing fourth in the 200m breaststroke at both events, but was a part of the 4x100m medley relay team that won a pair of bronze medals.

Having helped the University of Minnesota win three straight Big Ten Championships in 2013, 2014 and 2015, Smith was crowned NCAA Champion in the 200-yard breaststroke in 2015 and was named Big Ten Swimmer of the Year.

After winning gold in the 100m breaststroke at the 2019 Canadian Trials, Smith qualified for her third FINA World Championships. There she swam the prelims of the Canadian 4x100m medley relay that would win bronze.

A Little More About Kierra

Getting into the Sport: Took swimming lessons at age 3… Started swimming competitively at age 10… Would go swimming in the morning with her father while he trained before eventually joining the club… Outside Interests: Graduated from the University of Minnesota in 2017 with a Bachelor of Arts in Communication and Media Studies… Would like to become a sports psychologist… Enjoys studying at Starbucks and going to the beach in Kelowna… Enjoys watching Netflix… Odds and Ends: Nickname: Smitty… Pre-race ritual includes numerous checks of Twitter and listening to Gwen Stefani… Collects Starbucks mugs with the names of the cities she visits…